Thieves have allegedly stolen components from more than 60 standpipe connections that are attached to high-rise buildings in Vancouver.
Sep 5, 2019 1:09 PM By: John Kurucz

A rash of thefts specifically targeting life-saving infrastructure used by Vancouver firefighters is spreading throughout the downtown core and Downtown Eastside, jeopardizing hundreds if not thousands of lives.

Thieves have allegedly stolen components from more than 60 standpipe connections that are attached to high-rise buildings. Those connections are critical to firefighters, as they feed water to sprinkler systems and upper floors of a building.

Police believe the connections are being targeted because of their metal components, namely brass and aluminum. Each piece of equipment can net a thief about $15 — or roughly one dollar per pound — from a scrapyard. Roed said every scrapyard contacted by police has been cooperative in the investigation. No suspects are in custody. 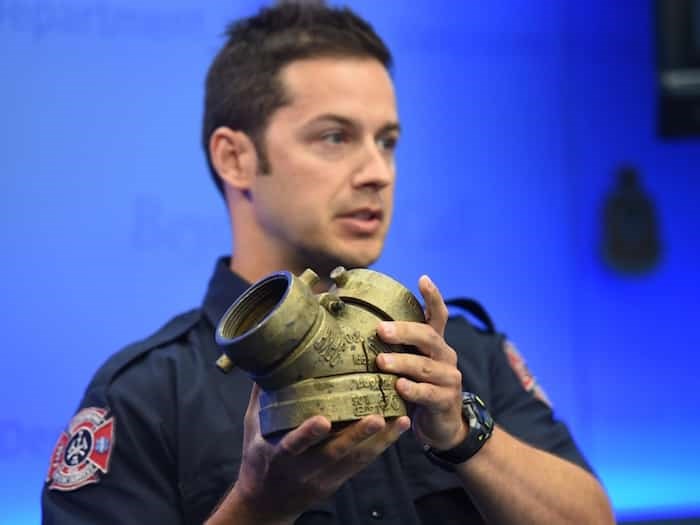 Vancouver Fire and Rescue Services fire prevention inspector Matthew Trudeau shows one of the standpipe connections stolen from the exterior of buildings downtown and in the DTES. Photo: Dan Toulgoet

Police and firefighters noticed an uptick in thefts about six months ago, though the problems worsened exponentially in August.

Trudeau said one building has been hit five times with the same type of theft. Replacements costs and the subsequent need to flush the water line runs into the thousands of dollars. The replacement process can take upwards of a week.

Removing the connections is far from easy. Trudeau has seen surveillance footage of one theft that required the use of a battery operated grinder and other hand tools.

While about 60 incidents have been reported, police believe more thefts have occurred but gone unnoticed. Building managers and residents are asked to check their standpipe connections and call police if any of the metal fittings are missing.

There are numerous tactical challenges facing firefighters in the absence of those connections. Additional equipment is needed, hoses must be carried up stairwells or fed through elevator shafts, or ladder trucks are called in.

All of those scenarios add time when time is at a premium.

“Depending on [building] height, it starts creating a large tactical problem for our officers that would delay freighting efforts,” Trudeau said.

Building managers and occupants are asked to check their standpipe connections and call Vancouver police if any of the metal fittings are missing.