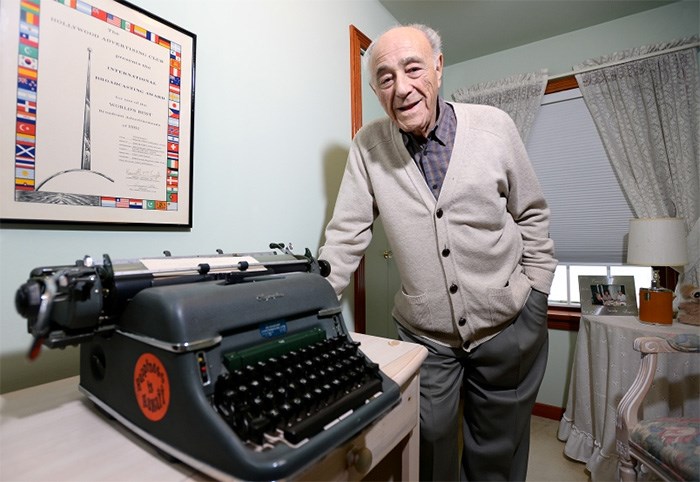 The longtime Royal City resident was the artistic force behind the famous Woodward’s $1.49 Day jingle that ran on the airwaves for decades, before the department store chain closed in 1993. The Australian native wrote the iconic jingle on Feb. 17, 1958, while working as the creative director at CKNW.

“I had just come back that Monday morning from six weeks of holidays in Australia. I bowed to my mother’s wishes to come home for Christmas,” he recalled. “Before I left, I went to Hal Davis and Bill Hughes and I said, ‘Listen carefully to me: when I come back, if there isn’t a brand new typewriter on my desk, I’ll quit.’ I had an old typewriter that nobody wanted, and the new kid on the block inherited it.”

Antonias started working at the radio station as a copywriter on Jan. 31, 1955, soon moving up to copy chief and then creative director. Returning to work at the station on Columbia Street after his vacation, he was pleased to find a brand new typewriter on his desk, but his mood soon soured when he was called into the sales manager’s office and asked to do something “very creative” for Woodward’s Department Store’s $1.49 Day – ads that normally featured someone reading a list of sale items.

Antonias said he was “mad as a wet hen” when he returned to his desk, where coworkers were admiring his new typewriter.

“I was so mad I swung my hand around and it hit a key and it went ding. Everybody looked up. ‘What was that?’ I hit my typewriter and the ding became ding, ding. As God is my witness, it was almost like a melody to me. I sat down at my new typewriter and I wrote: $1.49 Day Woodward’s, $1.49 Day Tuesday. I had the melody.”

Working with CKNW’s record librarian Dick Abbott, Antonias soon had a jingle on his hands and recorded it that weekend. But when reviewing it with Abbott on Monday morning, Antonias felt something was missing – and they added a whistle at the beginning and end of the jingle.

The $1.49 Day jingle – featuring Antonias whistling – was a hit for Woodward’s as soon as it hit the airwaves that April. Three years later, the Hollywood Advertising Club in California awarded Antonias an International Broadcasting Award for creating one of the World’s Best Broadcast Advertisements.

A man once ventured into the CKNW studio with his mynah bird, who whistled the jingle on command. On another occasion, Hughes, who was the station’s general manager, called Antonias into his office to relay a call he’d received from a health facility in New Westminster.

“They phoned Bill Hughes to tell him they had this little boy who had never opened his mouth to say boo – until $1.49 Day hit the air. Then he started singing it,” Antonias smiled. “It’s that crazy?”

During his 40-year career with CKNW, Antonias wrote thousands of ads for various companies, but it’s the $1.49 Day ad for which he is best remembered.

Antonias, who can’t believe it’s been 60 years since he wrote the jingle, believes the ad’s appeal to people who remember it so fondly is that it takes them back in time. Now retired, he keeps busy by promoting arts happenings around town and appearing before city council to spread the word about various events.

Check out the video of Antonias speaking about the jingle — and hear the full version at the 2:43 mark — below: