Toronto sunset over lake panorama with urban skyline / Shutterstock Thinking of flying directly to Toronto on the cheap this summer? Sadly, chances are fairly slim that Vancouver residents will be able to score a ticket under $400 CAD return at this
0
Jun 12, 2019 11:14 AM By: Elana Shepert

Thinking of flying directly to Toronto on the cheap this summer?

Sadly, chances are fairly slim that Vancouver residents will be able to score a ticket under $400 CAD return at this point. Not only is summer one of the most popular travel times of the year, but it is also already June. As such, it is a little late to try to bank in on any early-bird deals.

With that being said, there're still a couple of ways to save on the cross-country flight. For one, flying into another airport can save you over $200 CAD return on a round-trip flight. However, travellers will have to depart out of Abbotsford International Airport rather than Vancouver International Airport in order to take advantage of the savings.

For example, this flight departs Vancouver on Wednesday, Sept. 18 at 9:55 p.m. out of Abbotsford and arrives in Hamilton on Monday, Sept. 19 at 5:01 a.m. the following morning. Not only is the flight direct, but it also costs $99 CAD including all tax and fees. 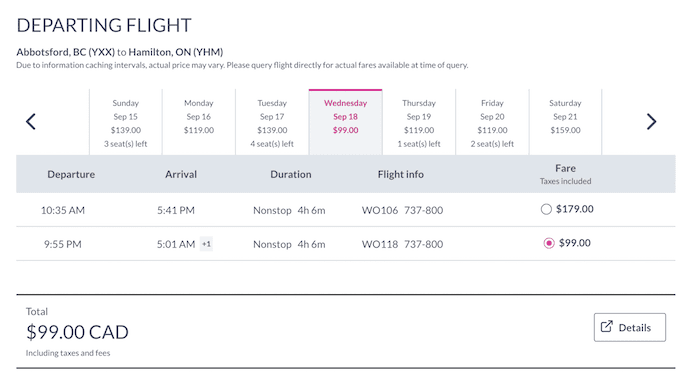 Of course, not all residents of the Lower Mainland are able to travel out of Abbotsford. Furthermore, some people prefer to land in Toronto rather than commuting from Hamilton. With that in mind, travellers who are looking to score the lowest fare possible will find that this ticket is literally hundreds less than other airlines offering flights between the two cities.

Swoop also offers cheap one-way tickets right now from Abbotsford to Winnipeg for as little as $129 CAD including tax, to Edmonton for $49 CAD, and Las Vegas for $119 CAD>

Note: While the low-cost carrier is an extremely affordable alternative, it is worthwhile to note that there are a number of additional costs. For one, luggage will cost extra, as will selecting your own seat or even speaking to an operator. As such, it is worthwhile to factor in what you need to bring, or if you want to sit in a particular spot.

You may take advantage of the savings here.