One of the men can be heard swearing and verbally abusing the reporter and even asking for money to be included in her video
Apr 9, 2020 1:50 PM By: Castanet 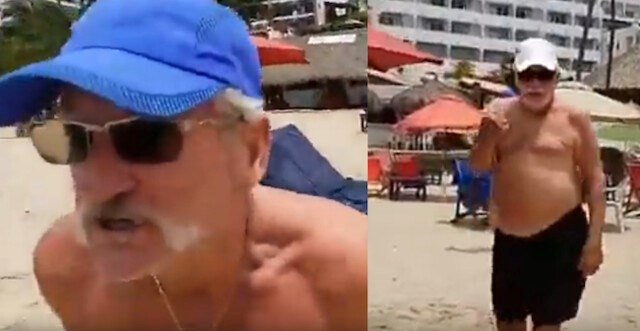 The unidentified tourists, reportedly from Vancouver, B.C., who accosted a reporter on a Puerto Vallarta, Mexico beach. Screenshot

A couple of Canadian tourists, believed to be from Vancouver, got the exact opposite reaction they were looking for after they accosted a Mexican reporter for doing her job on a Puerto Vallarta beach.

Mexican officials have closed beaches and recreational centres to help stop the spread of COVID-19, but it appears some people are not getting the message.

Mexican reporter Doraliz Terrón, was doing a live report on Facebook when two tourists, reportedly from Vancouver, accosted her at Los Muertos Beach telling her, "you can’t film us, get out of here."

The video, which is making the rounds on Mexican news outlets, shows one man accosting the reporter and slapping at the phone she was using to record the broadcast.

The tourist can be heard swearing and verbally abusing the reporter and even asking for money to be included in her video.

Paralelo Informativo and the Puerto Vallarta Daily News have identified the two men as from the Lower Mainland, but Castanet is not able to independently confirm their identities.

Both the Canadian and U.S. Ambassadors to Mexico have condemned the actions and attitudes caught on tape. The United States Ambassador, Christopher Landau says, “what a shame! I don’t know if he was a citizen of the United States or Canada, but the truth is he was rude,” wrote the ambassador.

The Canadian ambassador to Mexico, Graeme C. Clark, also expressed his position on the matter: “I fully agree with @USAmbMex. Completely unacceptable. I apologize if you are a Canadian."

The mayor of Puerto Vallarta, Arturo Dávalos, called for tourists not to visit beaches while the health pandemic lasts.

“This is not the time for tourists or visitors to come, it is time for them to take shelter and stay at home, right now are not the best conditions so we are not going to attend to them as they deserve and most importantly, they are not going to be infected or will not infect someone,” said the mayor.

Terrón also indicated she received abuse from the staff at Fidencio’s where the incident happened.

Mexican restaurants are allowed to remain open if they follow social distancing guidelines but they are prohibited from offering service on the beaches at this time.