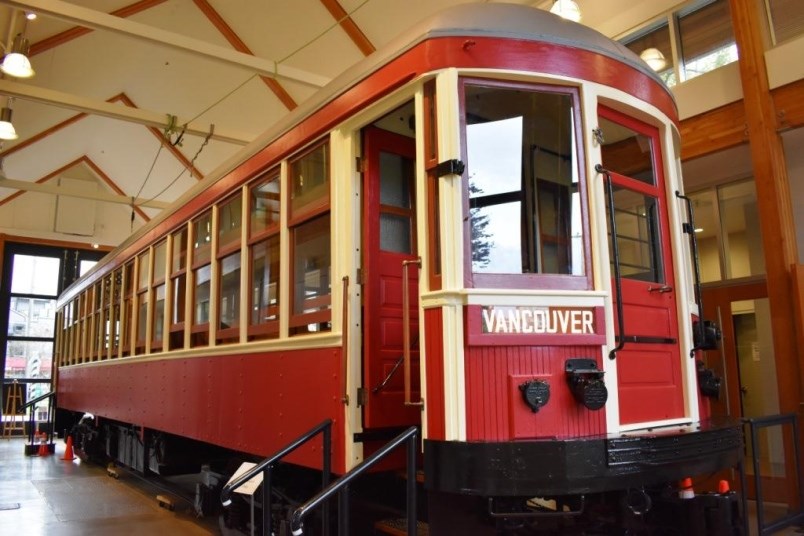 The refurbished Steveston Interurban Tram at the corner of No. 1 Road and Moncton Street. Richmond News photo

Having a trackless trolley or tram that could better connect Steveston’s heritage sites would be a “destination enhancer” that both tourists and locals would enjoy, according to the CEO of Tourism Richmond.

“It would be unique, it would be fun and I think it would just continue to enhance all the great things that Steveston has to make it unique,” Nancy Small told Richmond City Council on Monday.

Council had commissioned a $50,000 feasibility study to see if the heritage tram, currently on display indoors at Moncton Street and No. 1 Road, could be put back into use between its current location and the Gulf of Georgia Cannery. This wasn’t recommended by staff because of the high cost and risk to pedestrians, cyclists and cars; council voted to keep its current static Steveston Tram program.

However, a suggestion from Coun. Carol Day at last week’s committee meeting sparked a conversation to bring in a trackless tram as a tourist attraction.

While Small was supportive of the city keeping its current tram program, she also said a trackless tram would be another good option.

“I think it will really enhance Steveston’s reputation and ultimately Richmond’s reputation,” she said, adding she hoped the service could be offered at no cost to users.

She told council Tourism Richmond has run transportation pilot projects, such as a paid service that brought people from central Richmond to Steveston.

The cost of that program was too high and the route was too long, she explained.

A second pilot last year ran a free service from central Richmond on a more direct route to the village, and operated only on weekends during the summer.

“(It) was extremely successful and we had locals and visitors alike who were taking advantage of this service,” said Small.

“So there have been some projects, we’ve got some good learnings from those, and I think there could be really good potential for something in the future that we could look to, to help us inform us of what this project could be.”

The report also stated there would be “considerable risks and safety considerations” to the public of having a tram running through Steveston.

According to Small, 8.5 million people visited Richmond in 2019, 60 per cent of whom were from outside Canada, and, of that number, 21 per cent came from Asia.

She said the top attraction was the village, with 34 per cent of visitors making their way to Steveston.

“We also hear from visitors that they want more attractions in Richmond and are very interested in culture, art, history and more walkable areas, and just more things to do in the city,” she said.