Suncor president and CEO Steve Williams waits to address the company’s annual meeting in Calgary, Wednesday, May 2, 2018.
Jun 6, 2018 12:08 PM By: The Canadian Press 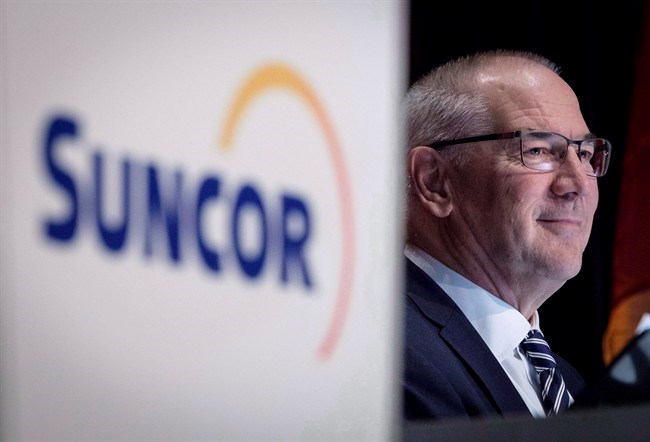 Suncor president and CEO Steve Williams waits to address the company’s annual meeting in Calgary, Wednesday, May 2, 2018. The CEO of Suncor Energy says the oilsands producer is standing by its decision to avoid spending on large growth projects due to Canada’s lack of competiveness with other jurisdictions. THE CANADIAN PRESS/Jeff McIntosh

The CEO of Suncor Energy Inc. says it will continue to avoid spending on large growth projects in Canada despite the federal government's move last week to purchase the Trans Mountain pipeline expansion and the existing pipeline from Kinder Morgan Canada Ltd.

Steve Williams says the $4.5-billion sale doesn't change his view that Canada is falling behind other jurisdictions in terms of competitiveness when it comes to government royalties, taxation and confidence in the regulatory system.

He says the announcement was "encouraging" because it shows support by Ottawa to build a vital piece of infrastructure.

But he added the fact the government felt it had to buy the existing Trans Mountain system to ensure the expansion it had approved is actually built shows "normal processes didn't work very well."

The $7.4-billion project designed to increase pipeline capacity from 300,000 to 890,000 barrels per day between Edmonton and the Vancouver region still faces vocal and legal opposition from the provincial and municipal governments in B.C., as well as environmentalists and Indigenous people.

The Canadian Association of Petroleum Producers says in a report this week that Canada's oil and natural gas sector will pay more than $25 billion over the next 10 years to address provincial and federal climate initiatives.

Suncor is ramping up production of its recently completed $17-billion, 194,000-barrel-per-day Fort Hills oilsands mine north of Fort McMurray, Alta., but has approved no other major growth projects for its northern Alberta oilsands leases.