Members of Coast Salish Nations lead a flotilla from North Vancouver to Trans Mountain’s Westridge marine terminal in Burnaby to perform a ceremony on the water.
0
Jul 16, 2018 7:14 AM By: Lauren Boothby 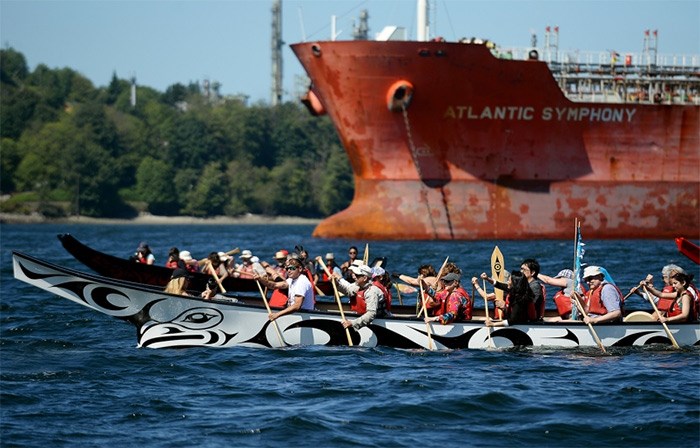 Members of Coast Salish Nations lead a flotilla from North Vancouver to Trans Mountain’s Westridge marine terminal in Burnaby to perform a ceremony on the water. Photograph By JENNIFER GAUTHIER

A procession of around 75 canoes and kayaks paddled their way from North Vancouver to the Westridge Marine terminal in Burnaby Saturday morning for a water ceremony, in protest of the Trans Mountain pipeline expansion.

Around 200 people gathered on the beach at Cates Park Saturday morning before the flotilla, led by a group of elders in traditional Coast Salish canoes, headed toward the terminal.

The flotilla stopped at the marine gates to place traditional Indigenous medicines along the fence, to sing and pray, before returning to the beach.

The ceremony was meant to reinvigorate the oppostion movement against the pipeline expansion, and show reverence for the water and marine life in the Inlet.

Greenpeace spokesperson Charles Latimer said he hopes the demonstration will send a message ahead of July 22, after which time the federal government has said it will buy the pipeline expansion.

“It comes at a moment where we need to show that the resistance isn’t going anywhere, and if Kinder Morgan was willing to walk away, this project doesn’t have legs to stand on,” he told the NOW. “The resistance is going to keep going, no matter who owns the pipeline.”

Saturday’s event stands in contrast to last week’s demonstration where seven protesters hung from the Ironworker’s bridge in hammocks for two days, before they were removed by the RCMP.

Will George, a member of the Tsleil-Waututh Nation who is leading the ongoing resistance to the pipeline expansion with Protect the Inlet, told the NOW he was pleased with the day's event, though the quiet ceremony was much different from the protest last week.

“We don’t always have to protest like that. What’s most important for us is our ceremonies. Ceremonies, we’re protecting, by doing this work,” he said. “It’s important for us to do that work, to keep in ceremony and prayer.”

Johnston told the NOW he was participating because he was “committed to the land and the water." He said the water ceremony was moving.

“It was really spiritual. You really got a sense of the water and the land together, and how small we are in relation to that,” he said.

Organizers of the event provided kayaks and canoes for those who wanted to join the procession.

At least 100 others remained on the beach and held a rally after the flotilla returned.