An excavator works in the rain next to an area of exposed earth at the northeastern section of the Trans Mountain terminal on Burnaby Mountain, April 13.
0
Apr 27, 2018 8:42 AM By: Lauren Boothby 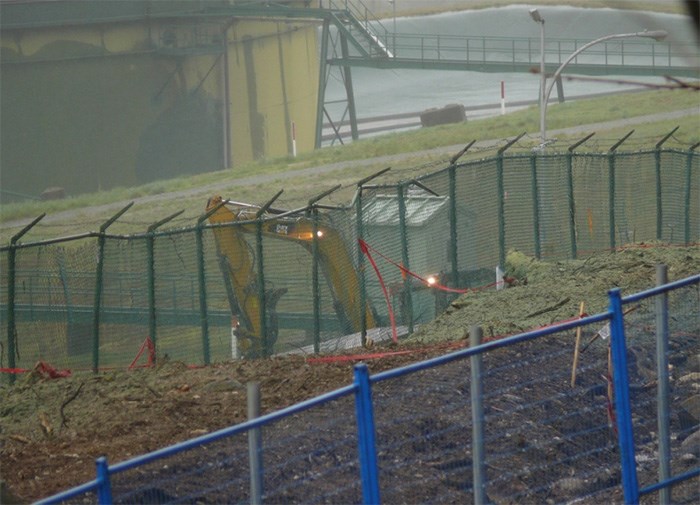 An excavator works in the rain next to an area of exposed earth at the northeastern section of the Trans Mountain terminal on Burnaby Mountain, April 13. Photograph By John Preissl, Contributed

A National Energy Board (NEB) inspection of Trans Mountain’s terminal in Burnaby has found some aspects of the company’s sediment and erosion measures were not properly installed, the NOW has learned.

Federal and provincial officials inspected the site this week following reports of a sediment spill into the Silver Creek tributary south of the tank farm on April 13. Inspectors did not find sediment in the rivers during their inspection – the streamkeeper who reported the spill previously indicated the waters had cleared by the afternoon of April 13 – but they identified non-compliance with some of the sediment and erosion control measures.

Those problems were corrected on site by the company.

Burnaby streamkeeper John Preissl told the NOW in January about the potential risks of rerouting Silver Creek and Eagle Creek tributaries on the mountain during the spring, calling it a “recipe for disaster.” In that interview, he said there would be runoff where crews were working which could affect the salmon downstream. Runoff can fill the water with silt, causing breathing problems for fish, and can smother their eggs.

When reached for comment, Trans Mountain confirmed the inspection was complete.

“All work at Burnaby terminal is completed under applicable environmental requirements and with all approvals in place,” Trans Mountain said in an email statement to the NOW. “Trans Mountain takes its commitment to public and worker safety and environmental protection extremely seriously.”

A full report of the NEB’s findings is expected to be released soon.