Carys Woolford hand-painted 110 happy rocks and delivered them to the residents at The Waterford
Jan 21, 2021 1:30 PM By: Mark Booth 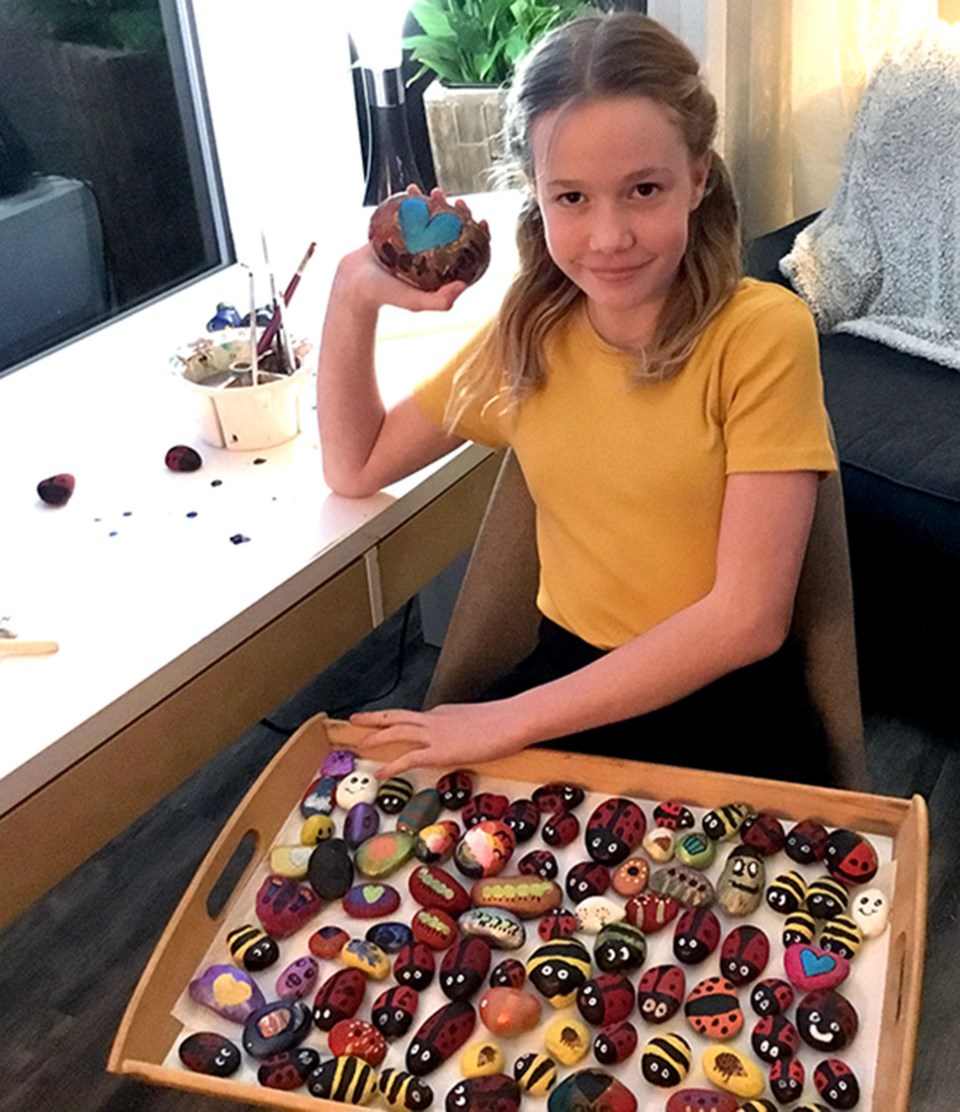 Tsawwassen Grade 7 student Carys Woolford hand painted 110 "happy" rocks for every resident of The Waterford which has been dealing with a COVID-19 outbreak. Submitted

Carys Woolford wanted to reach out to a seniors’ residence in her hometown that was going through a tough time and she made sure no one was going to be left out.

On Tuesday, the Grade 7 Late French Immersion student at Chalmers Elementary delivered 110 hand painted “happy” rocks for every resident at The Waterford.

The Tsawwassen seniors’ community has been dealing with a COVID-19 outbreak since late December that grew to over 60 cases at one point, involving residents and staff members.

According to Woolford’s proud mom Ryanne, her daughter collected the rocks in the backyard and then spent two weekends and a couple of odd evenings painting them. Each one also came with a handwritten note with her well wishes.

The idea originated last spring during the early days of the pandemic lockdown when Carys’ grandmother surprised her by leaving some “happy” rocks in the family garden. Carys and her little brother then decided to do a ‘happy rock scavenger hunt’ at her nana and papa’s place that concluded with a socially distanced “hello” at the end of the trail.

Carys was later involved in a project called ‘Stories of Kindness’ created by the WITS, an educational anti-bullying program, and the co-founder of pink shirt day. In December, she was asked to contribute a video about an act of kindness and she decided to extend her 'happy rock' idea by sharing it with The Waterford.

“Of course, she wasn't able to do a scavenger hunt, but she hand-painted the rocks and included a little note with each one to bring them happiness and to let the seniors know she was thinking of them,” explained Ryanne. “This whole thing has been a great experience for Carys and once she sees the pictures of the residents after they have received their rocks, I'm sure she will appreciate even more just how amazing this act of kindness has been!”

The Waterford residents and staff were certainly touched by Woolford’s efforts. She is part of an outpouring that includes care packages from the South Delta Baptist Church and the Augustine House Society.

“Carys’ happy rocks are just so fantastic. We have really felt supported by the entire community. So many people have reached out with such kind words,” said Janice Miller, marketing and community relations manager for Bria Communities that operates The Waterford. “To see kids just wanting to love seniors like this and feeling a lot of compassion and connected to seniors is really a wonderful thing. It makes our hearts excited for the future.”