Why this one-legged turkey named Gertie is the luckiest bird in B.C.

Gertie, like most turkeys, was being raised in a barn stall for Thanksgiving dinner, when one night she had an accident that would change the course of her life forever.
Oct 3, 2018 3:51 PM By: Elisia Seeber

There’s at least one turkey that won’t be gobbled up this Thanksgiving, and that turkey’s name is Gertie.

Gertie, like most turkeys, was being raised in a barn stall for Thanksgiving dinner, when one night she had an accident that would change the course of her life forever. 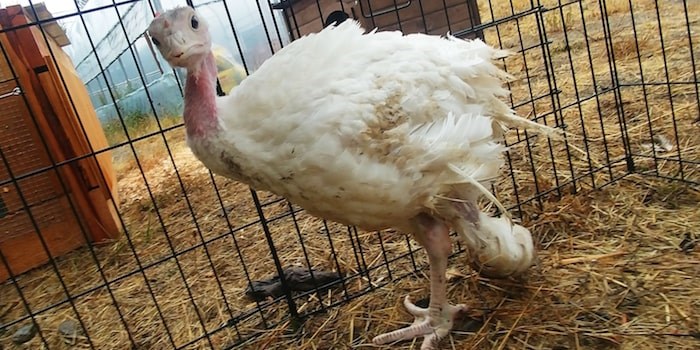 Gertie’s leg was severed in a farming accident. – Michelle Singleton

“At some point one evening Gertie jumped up on a hay rack in the stall and fell, but her leg got stuck,” Michelle Singleton, from Home for Hooves Farm Sanctuary on Vancouver Island, says.

“She hung there all night and was found in the morning by a girl that boards her horse at the same farm Gertie was being raised.”

Gertie’s leg was severed and she suffered a compound fracture in the accident. Her leg died due to lack of blood flow and had to be amputated.

“The girl’s family tried to split and cast her leg but there was too much damage,” Singleton says.

The family brought Gertie to the sanctuary, where she is now recovering – without the fear of becoming dinner.

“Gertie came to us because she would have likely died due to cramped conditions and difficulty obtaining food and water due to her mobility issues,” Singleton says. 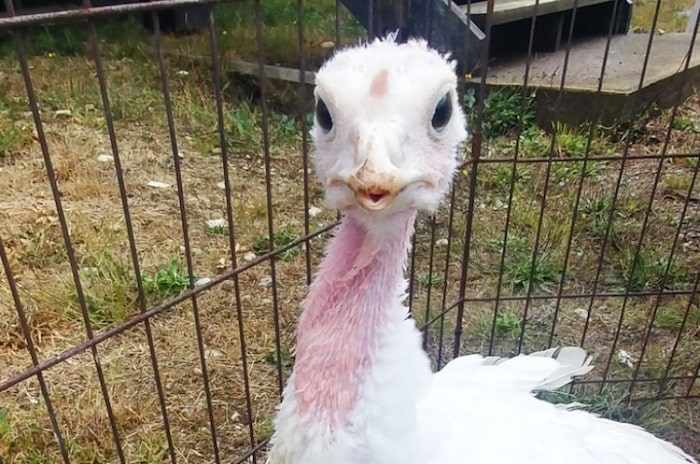 Gertie’s leg was severed in a farming accident. – Michelle Singleton

“She is currently able to hop around on one leg but she soon won't be able to do this because she is a breed of turkey that was bred to grow quickly for meat production, so, she will get big fast. Even with two legs these turkeys eventually have mobility issues due to their large size.”

Because of this issue, Singleton started looking at options to help Gertie walk again.

“Gertie, currently has a friend, Henry, which is a Cornish cross chicken, with the same problem, bred for meat and grows so big they have mobility issues,” Singleton says.

She is currently purchasing a chair for Henry from Chicken Therapy Chairs in Australia, which will cost about $100 to $150.

The chairs were “designed to assist the recovery of rescued battery hens who had sustained injuries” according to the website.

But Gertie will need something a bit different.

“Gertie has been seen by a fellow that is a certified orthotist and he is going to try and make a prosthetic for her.

“Her leg has only been healed for about three weeks, so she still needs time for the wound to heal in order to prevent pressure sores.

“For now we change the bandage weekly to ensure the leg is protected so it can heal properly.”

This week, part proceeds from a vegan Thanksgiving dinner will go towards buying the prosthetic leg for Gertie.

The event, ‘A Very Vegan Thanksgiving,’ is a pop up dinner at 4236 Main St. on Friday, October 5, that aims "to redefine tradition and how we give thanks: by keeping animals in our hearts only, and off our plates.”

Gertie’s story pulled at the heartstrings of so many vegans, the event has now sold out.

Event organizer Zoe Peled, from The Vegan Project, says she met Gertie on a recent trip to the sanctuary and knew she had to help.

“I was there in relation to another animal, a very special chicken, but Gertie really struck me. I’ve always had a particular affinity for turkeys,” Peled says.

“[Gertie] is not only a survivor of the animal agricultural industries but she is a survivor with one leg who will have a prosthetic soon and that is just a whole other level of strength and resilience.

She said Gertie’s situation was unique and they wanted to help with the costs of her medical needs and the needs of the other animals at the sanctuary.

“It was a perfect fit to do a Thanksgiving event with a turkey involved but in a very different way to what we have accepted as tradition up until this point,” Peled says.

Some of Vancouver’s top vegan chefs are working together to offer event guests a four-course-meal, with new takes and creative twists on holiday favourites.  The dinner features chefs Alina Bobby from The Juice Truck, Dee Dimla from MeeT, and Karen McAthy from Blue Heron Creamery.

“We have several projects on the go so I am incredibly thankful to have this group help with fundraising for Gertie's new leg.”

And that’s how Gertie came to be, possibly, the luckiest turkey in B.C.