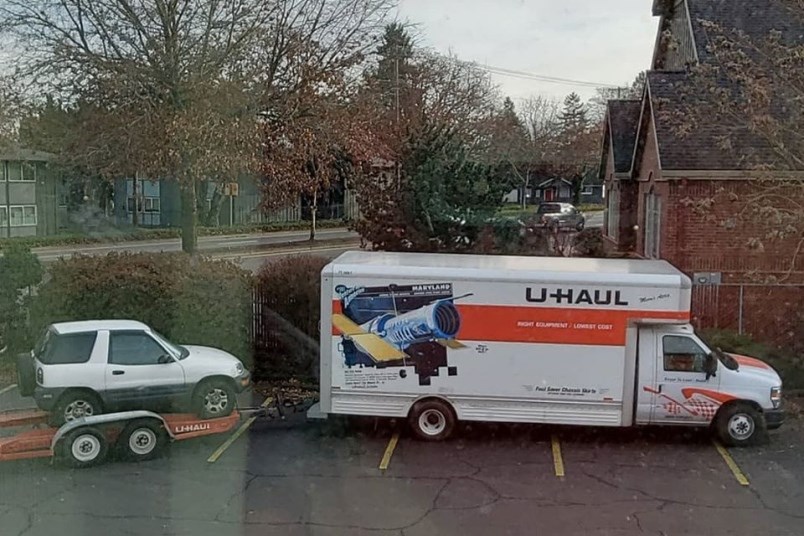 The U-Haul truck and trailer which was stolen from the Travelodge parking lot in Richmond in the early hours of Saturday. Facebook photo

The stolen U-Haul truck containing a Debbie and Terry Russell's lifetime possessions has been found in Vancouver.

According to police, the truck – which was stolen from the Travelodge parking lot in north Richmond in the early hours of Saturday – was recovered Monday morning in Willow Street, close to Oak Street and 41st Avenue.

And, police added that some of the contents of the truck appear to be intact, although it’s not clear as yet what has been recovered.

The truck and its remaining contents are currently under forensic examination.

The 20-foot truck and trailer went missing from behind the Travelodge on St. Edward’s Drive – close to Bridgeport and No. 4 roads – sometime around 3 a.m. on Saturday.

Around $40,000 worth of possessions – including old family pictures, years of photographic work, furniture, important papers, clothes – were in the truck.

Also being stored in the stolen truck were Terry’s drum sets, from his time as a drummer in Vancouver punk band Slow, which was active in the ‘80s and had a reunion tour in late 2017.

The couple moved to Los Angeles for a year to start a new band, before heading back to Canada recently. They had planned to put their possessions into storage on Saturday.

The Toyota RAV4 on a trailer attached to the truck was also stolen, but was later recovered by police close to the hotel.

“After living in California for a year and being broke and wanting to rebuild our lives, we came back to Canada with all our life's possessions in a rental U-Haul,” Debbie wrote on her Facebook page.

“We stayed at the Travelodge, only to find out the next day, it was stolen, not towed, from the parking lot sometime during the night."

“We feel badly for this family, as this is not the way someone should be starting their New Year,” said Cpl. Gabor Egri of the Richmond RCMP.