Laurie Embree, 70, is arrested for violating Trans Mountain’s court injunction at the Westridge Marine Terminal on June 19 Photograph By KELVIN GAWLEY Senior citizens must be deterred from interfering with the expansion of the Trans Mountain pipeline
0
Jul 31, 2018 2:31 PM By: Kelvin Gawley 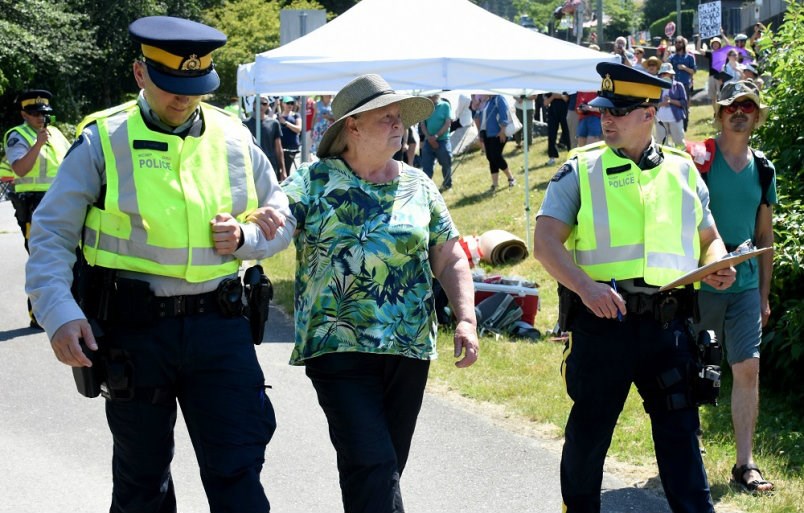 Senior citizens must be deterred from interfering with the expansion of the Trans Mountain pipeline, according to a Crown lawyer who successfully argued for two women over the age of 65 to be jailed for violating an injunction protecting Kinder Morgan’s work in Burnaby.

Embree, a 70-year-old grandmother from 108 Mile Ranch, will spend the next seven days in jail for refusing to get off the road leading to the company’s Westridge marine terminal on June 19.

Constance Lasheras of Langley, who was one of eight people arrested at the Trans Mountain tank farm on June 30, was also sentenced to seven days in jail, but will serve her term intermittently to allow her to continue working with a non-profit supporting families of children with fetal alcohol syndrome. Lasheras was identified as being older than 65 in court.

Embree was the first protester to be arrested after Affleck approved a beefed-up injunction at the beginning of June.

Prosecutors have been seeking increasingly more hours of community service and higher fines – up to $5,000 – for violators, as they try to increase deterrence.

“The older population of otherwise good standing in the community, without a criminal record is the population that must be deterred,” Rattan said, prompting laughter from the gallery filled with supporters of the protesters.

Embree said she accepted the facts presented at trial, but asked to make a statement.

“I have live my 70 years by abiding the law. Please allow me to explain why I have now chosen to break one,” Embree told the court.

“If we look back on our history, there have been many times when our laws have supported injustices,” she said, citing slavery in the U.S., child labour in the U.K. and Canadian residential schools. “I truly believe that when we have laws that support injustice, it is the duty of all good men and women to stand up and challenge those laws.”

Embree says she wants the full 7 day jail sentence to send a message that resistance will continue no matter that consequence pic.twitter.com/hDmjC6DGiQ