After being diagnosed with ALS, a terminal illness, Dennis Compton didn't think he'd be able to continue his Valentine's Day tradition with his wife, but his daughter made it possible...
0
Feb 19, 2020 5:20 PM By: Elisia Seeber 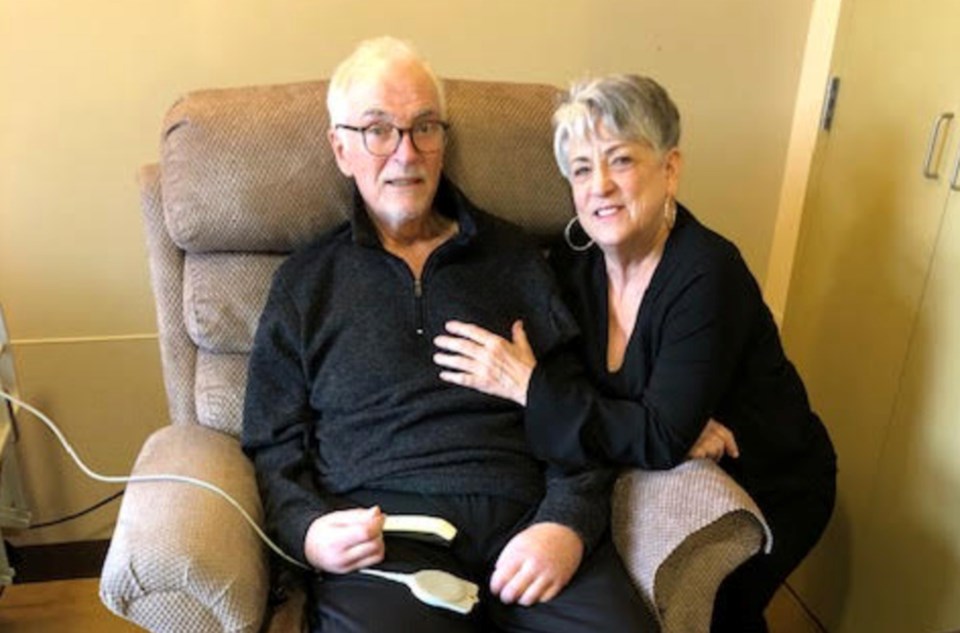 Dennis and Janet Compton have been together for 42 years. Photo: Lauren Compton

An emotional video of a Metro Vancouver couple spending what could be their last Valentine’s Day together has been shared on social media to help spread awareness about ALS, a terminal illness that slowly paralyzes the body.

Dennis Compton is a romantic at heart and without fail he has always bought the love of his life, Janet, flowers on Valentine’s Day throughout their 39-year marriage.

After being diagnosed with Amyotrophic Lateral Sclerosis (ALS) in May last year, the tradition seemed an impossible task earlier this month.

The disease gradually paralyzes people because the brain is no longer able to communicate with the muscles of the body that we are typically able to move at will, states ALS Canada.

“Over time, as the muscles of the body break down, someone living with ALS will lose the ability to walk, talk, eat, swallow, and eventually breathe.”

Dennis was in Mexico in March last year when he suddenly lost the ability to move his foot, and after three months of tests, the 71-year-old was diagnosed with the disease, which has no cure.

Dennis is no longer able to get around on his own, so his daughter Lauren decided to set up a special day for her parents and captured it all on video. The tear-jerking clip shows Dennis being picked up from Laurel Place Hospice by Lauren and taken to surprise his wife with flowers for Valentine’s Day.

“I just wanted to make a video of them so my mum would have something to remember,” Compton told Vancouver Is Awesome.

“He will be passing away sometime this year, probably in the next few months, so it was their last Valentine’s Day together.”

For many viewers, the passionate video is also a reminder that true love does exist.

“I think it just really tugged on peoples’ heartstrings because they could really see the love between my parents,” Lauren said.

“My parents have a beautiful love story. A lot of the time people don’t stay together in this day and age as long as they have and unfortunately, they are being separated by a terminal illness.

“A lot of women commented after seeing it that it was ‘love that some people spend years searching for’ — and it’s so true.

“They still love each other so unconditionally.”

Lauren said her parents met in a bar in English Bay 42 years ago, and in June they’ll celebrate their 40th Wedding Anniversary.

“My dad is actually fighting really hard to stay alive until then,” she said.

As well as wanting to share the love story of her parents, Lauren hoped the video would shine a light on what life is like for someone living with ALS.

“I just want people to know a little bit more about ALS and if the video helps people to do a Google search or ask, ‘what is ALS?’ and gets them thinking — that’s all that matters,” she said.

“Sometimes people don’t understand what people are going through unless you can actually physically see and feel the emotions of grief and love.

“It just gives people a different perspective on life."

She said the family had also created a Gofundme campaign for her father to be able to give back to the ALS Society of B.C., which has helped him so much over the past year. The campaign raised $24,000 and was donated on Giving Tuesday and doubled to $48,000 toward the cause.

Approximately 80 per cent of people with ALS die within two to five years of being diagnosed. ALS Canada works to improve the lives of people affected by ALS through support, advocacy and investment in research for a future without ALS.