If you're reading this in the Lower Mainland there's no doubt you've already heard the news that disruptive media property Vancity Buzz has gone national, launching newsrooms in Montreal and Toronto and absorbing their existing Vancouver and Calgary
Jun 1, 2016 8:48 PM By: Bob Kronbauer

If you're reading this in the Lower Mainland there's no doubt you've already heard the news that disruptive media property Vancity Buzz has gone national, launching newsrooms in Montreal and Toronto and absorbing their existing Vancouver and Calgary websites into one large network. Daily Hive is the name and as of today the "Vancity Buzz" brand has effectively vanished and turned into a section called Daily Hive Vancouver.

The Financial Post published this article about their expansion and there's certainly a buzz around the fact that they're expanding and also why they underwent such a bold name change. After 8+ years they not only built up a massive following but also general recognition for their brand. If you're under 50 and you live here you know of them and likely visit their site weekly if not daily.

Every person I've talked to in the media today (from journalists to broadcasters to branding/marketing executives and other editors) found it odd that they'd throw the baby out with the bathwater in such a manner. Does "brand evolution" and the fact that bees who "buzz" live in a larger "hive" make a good business case for giving up something they've worked incredibly hard to build up over almost a decade? Not if you ask most people who work in media, or branding. I have decades of experience in both fields, and I have a theory I'd like to test on you...

BuzzFeed Canada launched less than a year ago. Similar in scope to what Vancity Buzz was doing but on a national level, they deliver quick hits of media (and sometimes actual news) aimed at millennials who aren't picking up a newspaper every morning and who aren't going to wait for traditional media to catch up with their reading habits. Before BuzzFeed came north the American media giant applied for a trademark in Canada in January of 2013. If you've ever been through the process of getting a trademark approved you know it's arduous and it takes years to finalize, after many steps. In this case theirs was finally approved for official registration on April 5th. That's less than two months ago. 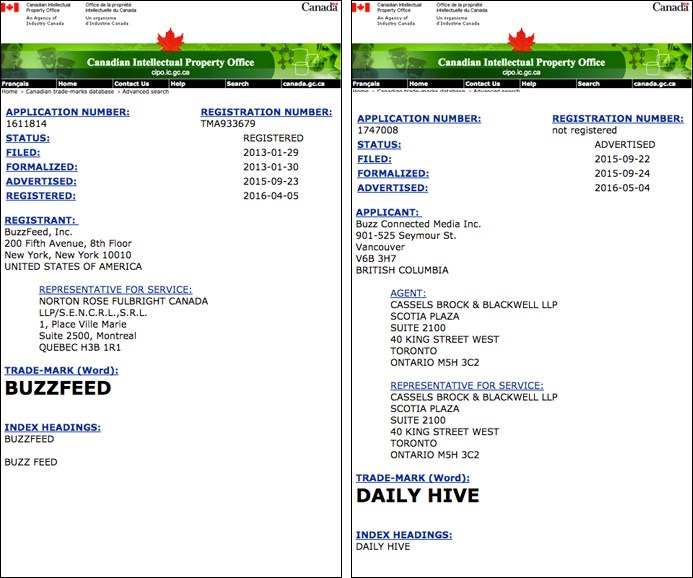 Buzz Connected Media (the founders of the now-defunct Vancity Buzz), applied for a trademark for "Daily Hive" roughly eight months ago. It makes sense that a big move like this would involve major planning over the span of at least a year, as everything has to be carefully considered and calculated. They certainly knew that not only would the two media properties instantly become direct competitors but they'd look similar to the average reader. They also knew that their respective Canadian trademark registrations (Daily Hive is here and Buzzfeed Canada is here) are both filed under Classification 35: "Advertising, marketing, promotional, business administration, office functions". My theory is that they recognized that "Canada Buzz", "Canadian Buzz" or anything that treaded near the name "BuzzFeed Canada" would be a legal risk they didn't want to take. So in the end it may not be a case of throwing the baby out with the bathwater but making sure social services doesn't come in and try to take baby away. It was a shrewd business move if you ask me. 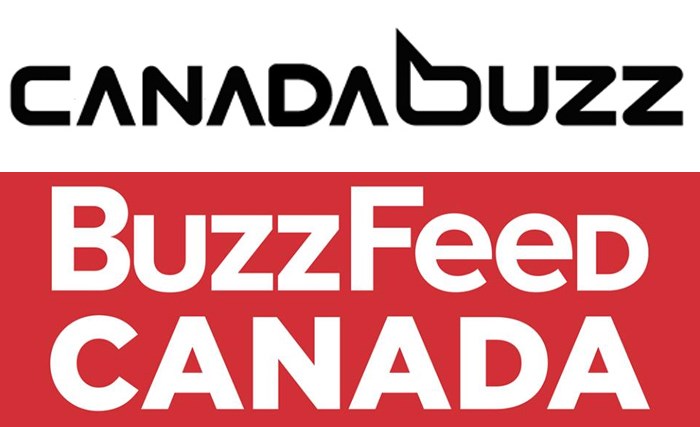 For illustrative purposes only. “Canada Buzz” does not exist.

If anybody is going to build a national online network in Canada it's Buzz Connected Media, and there's no doubt it will be a success. I reached out to their Editor-In-Chief Farhan Mohamed with a congratulatory note this morning, letting him know about our trials and tribulations of trying to go national with "Is Awesome" (if you've been following this Workshop series you know we haven't been able to scale successfully, and have essentially given up trying). I asked if he might answer some questions before I published this piece but he hasn't got back to me yet. When (if) he does I'll amend it to include his thoughts.

This is part of an ongoing series where I'm taking you behind the scenes of our organization as well as looking at other publications in Vancouver. As the founder of V.I.A. with 20 years experience in online publishing, I'm lifting the veil to give you a better understanding of the business of it. Read more:

- Here's what the Sponsored Content on our site supports

- The Tyee does not want to be categorized with Vancity Buzz

- V.I.A.'s editor has been bullied online for years, by adults

- V.I.A. got tangled up in a frivolous lawsuit with the mayor, and it was hilarious