Rendering of part of the VAG building envisioned for Larwill Park. Photo via VAG Several new art galleries have opened in B.C.
0
Jan 16, 2018 1:45 PM By: V.I.A. 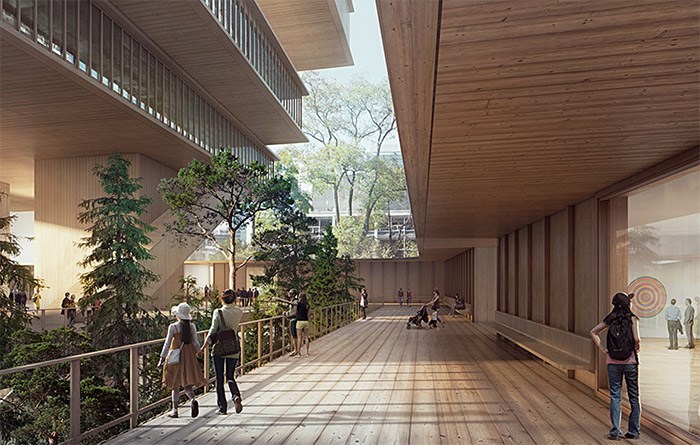 Rendering of part of the VAG building envisioned for Larwill Park. Photo via VAG

Several new art galleries have opened in B.C. in the last couple of years, but, with $150 million in government support yet to materialize, progress on the long-proposed expanded Vancouver Art Gallery (VAG) remains largely in limbo.

Aritzia Inc. founder and CEO Brian Hill and his wife, Andrea Hill, are the newest private benefactors keen to see a large new art gallery in downtown Vancouver. They have agreed to donate $5 million to help VAG build a 310,000-square-foot, $300 million wooden building on the southern two-thirds of the block bounded by Cambie, Dunsmuir, Beatty and Georgia streets. The VAG is also aiming to raise $50 million for an operational endowment fund.

“We want to contribute to this campaign to make both our art gallery and the city of Vancouver a better place to live and visit,” Andrea Hill told Business in Vancouver.

Together with a new $1.5 million commitment from BMO Financial Group and a new $1 million pledge from TD Bank Financial Group, the VAG has raised $40 million in private donations.

That is a fraction of the $150 million in private donations that it aims to raise – a total that does not impress B.C.’s minister of tourism, arts and culture, Lisa Beare.

“The B.C. government is encouraging the VAG to demonstrate greater private donation support,” she said. “The current funding request must be considered within the context of other pressing government priorities across all sectors, with the aim of making life more affordable for British Columbians. These priorities include taking action to increase affordable housing, addressing the Lower Mainland’s rapid transit infrastructure and creating affordable child care for B.C. families.”

Back in 2015, when VAG unveiled architectural renderings from Swiss architecture firm Herzog & de Meuron and local partners Perkins+Will, executives told Business in Vancouver that the VAG’s board would contribute $23 million, including at least $100,000 from each of the VAG’s 20 trustees. That was the extent of private fundraising at the time.

In the interim, several new art galleries have opened, thereby siphoning off some private capital that could have been sent the VAG’s way.

There is also the 25,000-square-foot, $20 million Polygon Gallery, which opened in November in a new venue at Lonsdale Quay that overlooks Burrard Inlet and the Vancouver skyline through floor-to-ceiling windows.

Private philanthropy in the arts sector but outside of those galleries came from Polygon Homes chairman Michael Audain, who in late 2016 donated $2 million to support expansion at the Art Gallery of Greater Victoria (AGGV); and Vancouver real-estate marketer Bob Rennie, who donated $12 million worth of art to the National Gallery of Canada in May.

“We would like to support an initiative that has a strong chance of being realized, and we’re not interested in making a pledge and sitting there with funds committed for a long time if it is not a strong ability to bring the project off,” Audain told BIV.

He has not yet pledged money to the VAG expansion, and he said that while he supports the concept, he believes that the AGGV expansion has a better chance of moving ahead in the short term than does the VAG’s.

The B.C. government kicked off the VAG’s fundraising efforts in 2008 with a $50 million contribution. Vancouver city council in 2013 then agreed to give the VAG a 99-year lease on its desired site, which is known as Larwill Park, even though it houses a parking lot. That site was valued at $100 million at the time.

The city’s plan was to keep the northern third of Larwill Park and find a developer interested in building an office tower on that land.

The VAG’s $350 million budget to build its new gallery and have an endowment fund was first floated about eight years ago and has not been increased to account for inflation.

B.C.’s NDP government will be largely responsible for whether the project goes ahead because of the new process that the federal Liberal government instituted for infrastructure funding after coming to power in 2015.

Ottawa has promised to invest $186 billion across the country over 12 years, and it has rejected having a “top-down” approach, said Brook Simpson, press secretary to Minister of Infrastructure and Communities Amarjeet Sohi.

Instead, provinces are allocated varying amounts of money to spend on all infrastructure projects. The provinces are then expected to prioritize projects and make funding requests from Ottawa, based on local priorities.

“What we need, in this case, is for the province to prioritize [the VAG expansion] for funding consideration,” Simpson said. “Then we would look at a funding request that way. We have not received a formal application for the project from the provincial government, which is the necessary step in order for that work [of considering federal funding] to take place.”•