Unlike other murals around the city, those in the Granville tunnel have an expiration date of about a year when the walls are painted over for new murals.
0
Dec 28, 2018 7:00 PM By: Kathryn Tindale

A dozen artists got the chance to have their murals decorate the walls of the pedestrian tunnel connecting Vancouver’s Granville Look Park for a year. Photo Dan Toulgoet

Stephanie Brook, a third-year economics student at UBC, began the street art gallery project two years ago as a way to promote local artists and increase the visibility of street art in Vancouver.

Unlike other murals around the city, those in the Granville Street tunnel have an expiration date of about a year when the walls are painted over for new murals.

Brook selects the artists who can paint whatever they want on the three by two metre wall space allotted to them. Out of the dozen artists commissioned for this year’s project, 10 have completed their murals so far.

“It’s kind of an experiment to see how artists like having their work up for just a year at a time, and it gives a lot more artists the chance to do something like this. Whereas if they were more permanent, it would just give the six to 12 artists their chance and no one else,” Brook said.

Third-year UBC student and artist Gorka Fraeters Irigoien has painted murals in the tunnel two years in and said the project brings life and colour to a grey city. 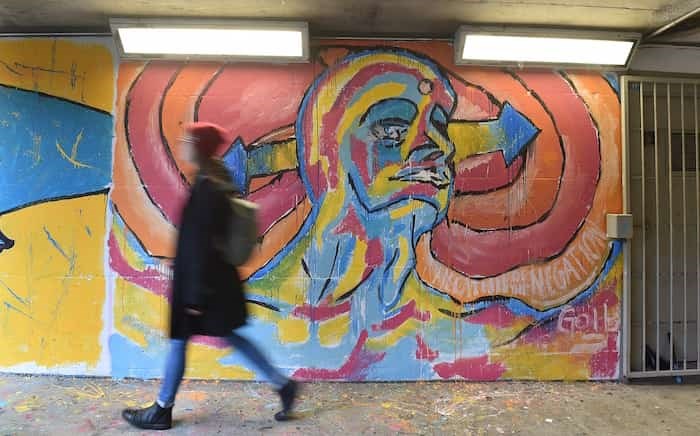 “When the first installment occurred, I was sort of sad that it wouldn’t be a permanent mural. Once I understood the beauty of this changing mural project, I was just happy and felt very fortunate that I was able to leave my mark in that way,” he said.

Irigoien’s mural is located near the west entrance of the tunnel with bright swirling colours to create the image of a person. He describes his recent mural as a representation of Hegel’s dialectic. “It has an upwards looking, transcendent, colourful figure whose self-consciousness explodes into his surrounding environment, only to re-enter his mind.”

Brook had the opportunity to pursue her interest in street art when an assignment in her microeconomics policy course challenged students to interact with the municipal government and public policy to initiate change in the city.

The initial idea was for a drop-in public art space for any artist to express themselves. After a month of phone calls, Brook presented her idea to Vancouver’s Graffiti Management Program. The project developed over time into a street art gallery to feature a different group of artists each year.

Artist Faba Rodea, who signs her work Cielito Lindo, moved to Canada three months ago and painted her first mural in the Granville Street tunnel this year. Her piece is also near the western entrance, next to Irigoien’s mural.

Rodea expressed her gratitude towards Brook as well as the other artists. “They make it their job to teach through art and take art elsewhere,” she said.

Rodea describes her mural as a symbol of continuous movement, with a large paper boat and a kite flying in the background. Transformation is represented with a butterfly known to migrate from Canada to Mexico annually. All of this comes from the breath of an abstract girl painted blue to represent multiculturalism with the addition of lyrics from a traditional Mexican song —“Cielito Lindo”— the inspiration for her signature.

The murals will change in late 2019. Brook hopes to expand the project to more locations and will consider incorporating a theme for next year.