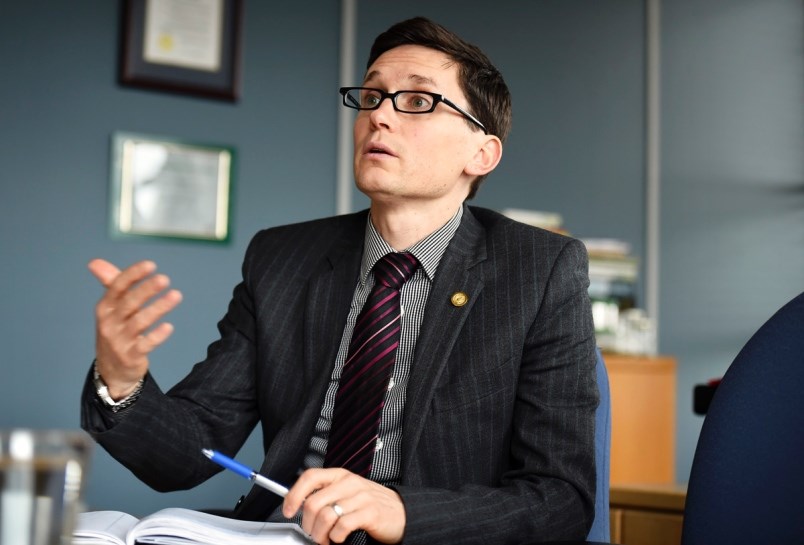 After 11 years with the city — five of those as city manager — Johnston told city council in a private meeting Tuesday that he will work his last day in January 2021.

In a memo to staff obtained by Glacier Media, Johnston expressed his gratitude to his colleagues and said the job has been the most rewarding of his career. But he also cited the toll the position has taken on his family.

“I’m so grateful to have had the opportunity to lead such an amazing organization, with so many creative and passionate people, all working to make the community better,” he said.

“At the same time, succeeding in this role has taken my full attention, and has required sacrifices for me and my family. My daughters are growing up fast and they have generously supported my work with the city, but now it’s time to prioritize them.”

Johnston became city manager in March 2016 after serving in an acting role while the city searched for a replacement for Penny Ballem, whose contract was not renewed by the administration of former mayor Gregor Robertson.

When he was appointed, Robertson said Johnston had demonstrated outstanding leadership at both the local and international level and had helped drive innovation across the organization.

Johnston, who is in his mid-40s, became deputy city manager in 2009, a position he accepted after leaving Chicago where he was then-mayor Richard Daley’s chief environmental officer.

He worked under Ballem and became staff’s point person on steering “the greenest action plan” and took a leadership role in the city’s campaign to stop the Kinder Morgan pipeline project.

“Council believes that he has the right skill set and vision to help take Vancouver to the next level as we tackle our affordability challenges and make Vancouver an even better place to live in,” Robertson said in appointing Johnston to lead the organization.

Four years later, the city is still an expensive place to live, the overdose death crisis is showing no signs of abating and homelessness persists, all issues heightened by the pandemic.

Johnston acknowledged those concerns in his memo, along with the historic and ongoing racism, rising poverty and equality in Vancouver, but said he had “the utmost confidence in the incredible passion and professionalism of the city staff and your ability to tackle all of these challenges.”

Under Johnston’s leadership, the city developed many firsts for a municipality in Canada, including rolling out the empty homes tax — which has generated tens of millions of dollars to invest in affordable housing — and becoming Canada’s first city of reconciliation, which has led to stronger ties with the Musqueam, Squamish and Tsleil-Waututh nations.

Johnston also pointed to carbon emission reductions, the addition of separated bike lanes, new childcare projects being built on parking garages, upgrades to the Burrard Bridge, the replacement of the Evelyn Saller Centre and Roddan Lodge in the Downtown Eastside and developing the Arbutus Greenway as other achievements he helped steer with colleagues.

But Johnston leaves the city during an unprecedented period in its recent history as it faces a revenue shortfall of $124 million in its 2020 operating budget and $219 million in the 2019-2022 capital plan.

Since the pandemic was declared in March, the city has laid off more than 1,500 workers, closed city facilities, cut back on services and ordered pay cuts to senior staff across the organization, which operates with a $1.6 billion budget

Council will begin budget talks in December, a time that has typically tested the leadership and patience of senior staff, including Johnston, who has worked with two mayors — Robertson and Kennedy Stewart — and two diverse councils in his career at the city.

Coun. Adriane Carr has worked with Ballem and Johnston in her time on council. She described the meeting Tuesday where Johnston broke the news as very emotional and that she will miss his passion for the job.

"My own personal feeling is that he has been an amazing person to work with, with his grasp especially on every issue at the city," Carr said after the meeting.

She said Johnston was very supportive of staff, which made for good morale across the organization. Asked about how his leadership was different from Ballem, Carr described it as "night and day."

"She ruled with an iron fist, and he had a much softer touch," she said.

Over the past two decades, Vancouver has only had three city managers — Judy Rogers from 1999 to 2008, followed by Ballem from 2008 to 2016 and then Johnston, whose interim replacement has not been named.

The job is a well-paid one, with Johnston earning $362,852 last year, according to the city’s statement of financial information for 2019.

Johnston, a dual citizen of the U.S. and Canada who has lived in Colorado, New York, Ohio and Illinois, did not announce his next move in his memo but is expected to keep a keen eye on the U.S. election in November: Johnston is a Democrat, with him and his wife doing some door-knocking for the Obama campaign in 2008.

His announcement comes after a year in which park board general manager Malcolm Bromley retired, fire chief Darrell Reid moved to a management job in Alberta and managing director of homelessness Abigail Bond became executive director of the Housing Secretariat in Toronto.

The city was expected to issue a news release Tuesday afternoon with more details about Johnston’s departure.