Vancouver’s annual Street Store will once again bring a little Christmas cheer to the city’s Downtown Eastside after members of the public and sponsors stepped up with $15,000 in donations.
0
Dec 4, 2019 11:32 AM By: Jessica Kerr

Vancouver’s annual Street Store will once again bring a little Christmas cheer to the city’s Downtown Eastside after members of the public and sponsors stepped up with $15,000 in donations. 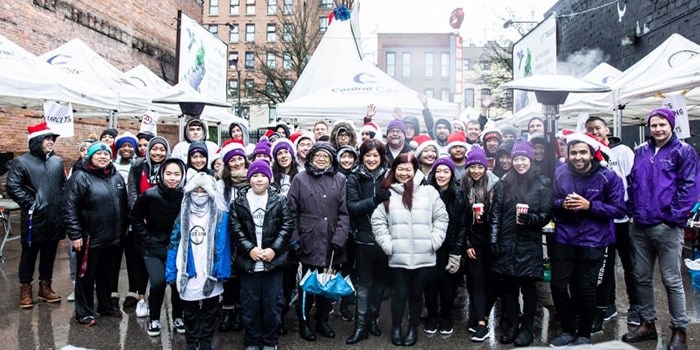 The Vancouver Street Store has been bringing Christmas cheer to Vancouver’s Downtown Eastside since 2014. Photo submitted

Last month, organizers issued a plea for donations after a significant increase in costs threatened to shelve the event, which has become a holiday tradition for many Downtown Eastside residents. The event costs are usually covered by organizer Christina Wong and sponsors.

More than 60 donors came forward to help, with one anonymous donor contributing $7,500.

The Street Store has been a part of Christmas in the neighbourhood since 2014.

“The Street Store provides a safe space for people to choose what they want and need, instead of being given what people think they need,” Wong said last month. “It’s like shopping. When we enter a store, we choose what we like. Nobody runs up to us and says, ‘Buy this, here’s what you need.’”

The Street Store is set up like traditional shops, with departments set up in different tents and volunteers acting as sales assistants. But at the Street Store everything is free.

Wong launched the initiative with a single tent after being inspired by a man she met while handing out care packages in the Downtown Eastside.

“He politely declined by care package and emphasized that what he actually needed was a haircut for an interview the following day,” she said. “This taught me the importance of dignity and choice.”

Last year, Wong co-founded Employ to Empower, a registered charity that supports people living in the Downtown Eastside by providing access to development and entrepreneurial resources, such as affordable microloans and business mentorship, with the goal of having a long-term impact of their personal and economic well-being.

The Street Store has opened every Christmas without fail since 2014. Since then more than 200 volunteers have helped distribute more than 40,0000 clothing donations to more than 5,000 residents.

While the fundraising push is over, the Street Store is still looking for help, including: