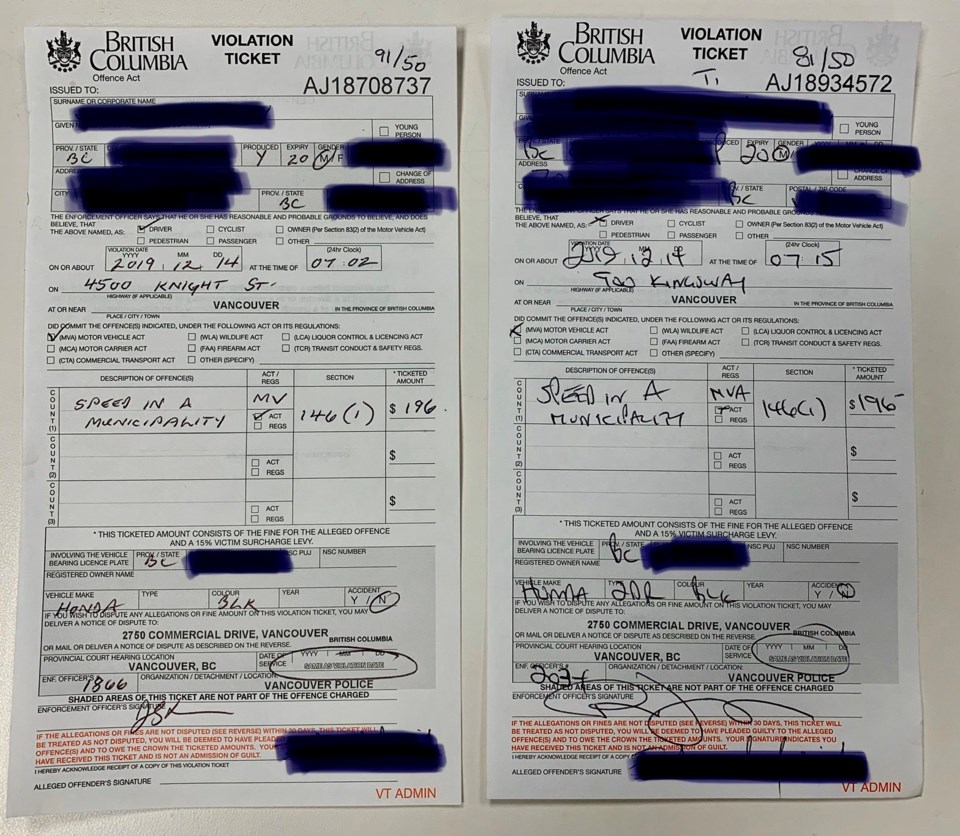 Two citations for the same car and driver within 13 minutes of each other. Photo: @baldguy1363 (Mark Christensen)/Twitter

The driver of a black Honda made short work of racking up some serious ICBC penalty points and fines Saturday morning when they were caught speeding twice in 13 minutes in Vancouver.

The first ticket was issued at 7:02 a.m. at 4500 Knight Street, then, just 13 minutes later at 7:15 a.m., the same car and driver are pulled over for the same infraction of "speed in a municipality" at 900 Kingsway. Looks like they probably continued north on Knight before turning left onto Kingsway - the two citation locations are about 1.4 kilometres apart.

"Ladies and Gentlemen, just because you received a speeding ticket at 1 location, doesn’t mean you can’t get a 2nd one 13 mins later at another location! $396.00 and 6 points!" points out Christensen.

Driver caught speeding immediately after being given a warning by RCMP
Nov 1, 2019 5:06 PM

This Metro Vancouver driver's dashboard is some next level distracted driving
Nov 13, 2019 10:00 AM

Police nab speeder going 93 km/h over limit on Metro Vancouver highway
Aug 2, 2019 7:39 AM
Comments
We welcome your feedback and encourage you to share your thoughts. We ask that you be respectful of others and their points of view, refrain from personal attacks and stay on topic. To learn about our commenting policies and how we moderate, please read our Community Guidelines.