Seismic engineers and psychologists from UBC teamed up with a visual artist to create an image of a Vancouver elementary school after a major earthquake.
0
Dec 3, 2019 5:38 PM By: Elana Shepert 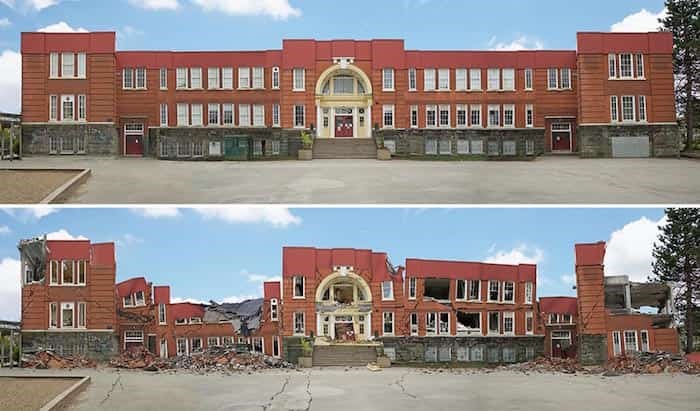 They say that a picture is worth a thousand words, and a new study finds that visuals may be a more effective way to encourage behaviour.

Seismic engineers and psychologists from UBC teamed up with a visual artist to create an image of a Vancouver elementary school after a major earthquake. Following this, the team tested whether the image would be more effective than statistics in helping people appreciate the risk posed by a major earthquake.

Iris Lok, a UBC PhD student in social psychology and the study’s lead author, describes how her thesis advisor, Dr. Elizabeth Dunn, was inspired to raise awareness due to her son enrolling in kindergarten.

Lok notes that, "the government typically provides abstract, quantitative information such as statistics," but that people tend to base their decisions on gut feelings.

The team selected a high-risk school that is due for a seismic upgrade, and the engineers envisioned what the school would look like after an earthquake. From here, the visual artist created a vivid image of what the school would look like based on the best available science. Finally, they tested people to see whether the image was more likely to incite action or the the statistics being used by the government.

After seeing the image, Lok notes that, "77.3 per cent of participants signed the petition. This was in contrast to the 68 per cent who signed after being shown only statistics."

The findings were published in the journal Collabra: Psychology, on Friday at the Behavioural Insights in Canada conference in Vancouver.