Vancouver's homeless say they're 'scared of dying' during extreme cold

Organizations in Downtown Vancouver are doing everything they can to ensure people are staying dry and warm — exceeding capacity at their shelters and handing out as many warm clothing items as possible.
Jan 14, 2020 6:58 PM By: Elisia Seeber 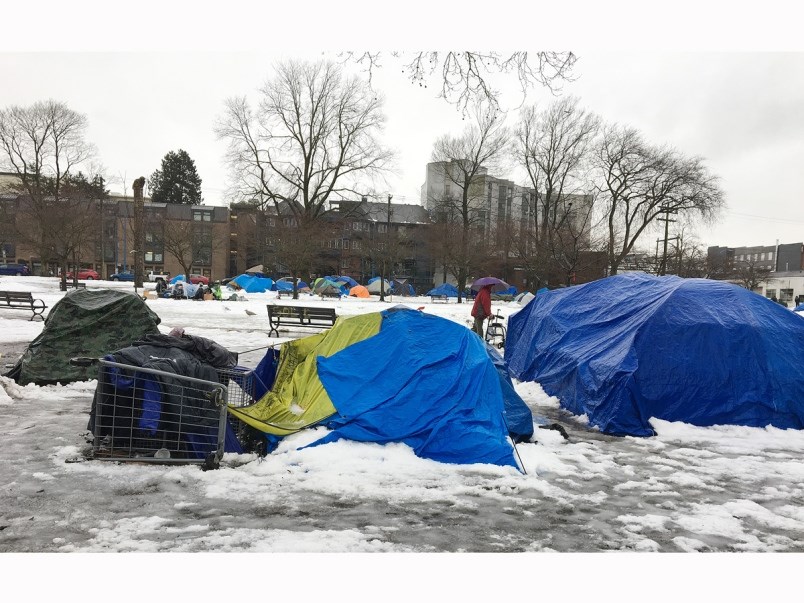 Vancouver Park Board approved installing a temporary warming station near Oppenheimer Park aimed at helping those living in the park. Photo: Dan Toulgoet

As Vancouver continues to shiver through a cold snap, organizations say people experiencing homelessness are telling them they’re “scared of getting sick or dying.”

A snowfall warning is currently in place across Metro Vancouver and Environment Canada warns temperatures will continue to feel like -10 with wind chill into Wednesday.

The City of Vancouver has opened extra shelters and warming centres, with an extreme weather alert being extended through January 15. The city said warming centres had opened at Powell Street Getaway, Overdose Prevention Society, Britannia Community Centre and Vancouver Aquatic Centre, and welcomed about 600 people in total over the past two nights. The centres offer hot drinks and a safe space for anyone who needs it, including people who have pets and carts.

PLEASE SHARE: Warming centres in #Vancouver are open - all are welcome and people can bring their carts and pets. People with their own bedding may choose to sleep over, and hot drinks and snacks are available. EWR shelters are also open. See details in the tables below: pic.twitter.com/F4hycoQC27

Organizations in Downtown Vancouver are doing everything they can to ensure people are staying dry and warm — exceeding capacity at their shelters and handing out as many warm clothing items as possible to people in need.

“We’ve heard from people who are homeless right now that they are really scared of getting sick or dying,” Allen told Vancouver Is Awesome.

“For them, staying warm and dry can be nearly impossible but also staying healthy is even harder, and we’ve seen health dangers ranging from getting hypothermia to a risk of pneumonia as temperatures are plummeting below freezing.

“This kind of extreme weather that we’ve had, it’s really the worst of the worst that we get in Vancouver. It can be a life or death emergency.”

In the City of Vancouver’s latest Homeless Count in March last year, 2,223 people identified as homeless. Up to 614 people were living on the street and 1,609 people were in sheltered locations, including emergency shelters, detox centres, safe houses and hospitals, with no fixed address.

Allen said UGM was continuing to offer emergency shelter for people, with up to 72 beds, and were making extra spaces and stretching capacity when possible.

Marianne Hicks, director of administration at The Salvation Army Vancouver Harbour Light on the Downtown Eastside, said their shelters had also been at 100 per cent capacity or over during the past week.

“We have six shelters that total about 246 beds but many of our shelters will keep putting down extra mats, if they have room, to make sure we aren’t turning folks away,” she said.

Hicks said demand was high for socks, toques, gloves and hand warmers for guests in the shelters and for people attending community meals.

“Socks in particular, because if you don’t have boots to keep your feet dry, once your shoes and your socks get wet it’s very difficult to keep warm,” she said.

Hicks said the Salvation Army was seeing increased numbers of people in need of a warm place to stay across B.C. and their facilities were opening extreme weather response shelters.

While UGM is grateful the City of Vancouver has stepped up its extreme whether response this year, Allen said a lot more needed to be done in other parts of Metro Vancouver and the Fraser Valley.

She said this was the first winter blast that UGM had dispatched two rescue vehicle mobile missions around Metro Vancouver and the Fraser Valley to provide desperately needed survival gear, hand out lists of emergency response shelters and to offer people rides back to shelters.

“They’re going out four to five times a week in the region distributing things like socks, gloves, winter boots, sleeping bags and emergency blankets to about 40 people each day,” she said.

“We know there are hundreds of people who just don’t have a place to go.

“People are already facing so many barriers when they’re homeless and on top of that when the cold weather hits there’s just an incredible amount of risk that they’re not used to.”

Both organizations urged that their most important goal was ensuring they could help as many people stay safe, healthy and warm during these extremely cold temperatures.

If their shelters reach capacity people are referred to other emergency shelters and are offered bus tickets or lifts to the locations, so they don’t have to travel too far in the cold.

Both charities encouraged the community to do what they could to help, even if it was just asking someone if they were ok or helping to connect people with emergency shelters.

“Talk to people in the community, check-in, and approach people kindly and safely and make sure they’re doing alright and they have somewhere safe and warm to be,” said Hicks.

How you can help:

Both UGM and The Salvation Army are calling for donations to continue helping people survive the extreme temperatures.

UGM needs more items to hand out across Metro Vancouver and the Fraser Valley. They’re calling for more waterproof shell jackets and base layers (in bigger sizes to allow for layering), sleeping bags, tents, emergency blankets and boots.

The Salvation Army is asking for warm socks, toques, gloves, hand warmers and any other winter clothing items.

Alternatively, you can make online donations to UGM or Harbour Light.