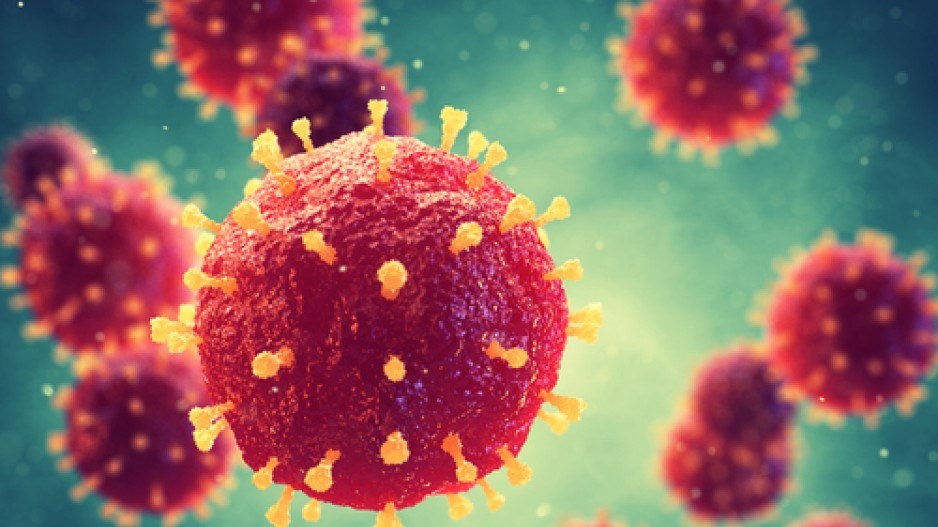 The 2019-nCoV virus started in Wuhan, China, and is believed to have been passed to a human being from an animal. Photo: Nobeastsofierce/Shutterstock

With the latest count being 18 people dead and more than 600 people sickened as a result of the new coronavirus awkwardly named 2019-nCoV, Vancouver International Airport (YVR) is working closely with Health Canada to try to quarantine anyone passing through the airport who has the disease.

Health Canada has not yet provided the airport with temperature-screening terminals that show thermal read-outs of passengers as they walk down corridors. The disease is infectious in that it can pass person to person, and some symptoms include fever and respiratory congestion.

Vancouver Airport Authority CEO Craig Richmond told Business in Vancouver on January 23 that Health Canada provided those terminals on a temporary basis in 2003 when a virus known as SARS spread rapidly around the world as a pandemic, killing approximately 800 people and infecting around 8,000 people.

Richmond was the airport’s vice-president of operations during that 2003 crisis.

“We are prepared to take any steps for public health that Health Canada directs us to do,” he said.

No one from Health Canada responded to BIV’s inquiry on when and if those terminals will be provided.

Canada's Chief Public Health Officer Theresa Tam, however, on a January 23 conference call said that she did not believe that temperature-reading scanners would be particularly effective at reducing the spread of the disease. She believes the best course of action is to focus on people who have recently been from Wuhan, China, where the outbreak originated.

Indeed, there is some doubt in the medical community about how effective those terminals will be in catching everyone who is infected with the disease.

Emergency physician Michael Curry, who is also a clinical associate professor at the University of British Columbia, told BIV that people are likely spreading 2019-nCoV before they have developed symptoms, such as fever. The result is that they may well pass through the airport undetected even if the temperature-screening terminals were used, he said.

This was not Tam's rationale, however. She said she thought people who have 2019-nCoV but are not yet symptomatic do not pose an immediate risk of transmitting the disease.

Richmond confirmed that Health Canada has positioned quarantine officers at YVR although he did not know exactly how many, nor if Health Canada personnel would locate any other professionals at the airport.

Health Canada has yet to clarify to BIV how many quarantine officers it has positioned at YVR.

“We have a team that is in daily contact, as you might imagine – hourly contact, with Health Canada,” Richmond said. “That team is multi-dimensional, and actually borrows on our experience in the past with similar experiences. Whatever comes out from the government of Canada, we will follow.”

So far, in addition to positioning the quarantine officers, Health Canada has added educational signage and had the airport authority add a question for travellers to answer as they go through customs and use automated kiosks.

That new question is whether the traveller has been to Wuhan.

Travellers who have been to Wuhan, and those who are feeling feverish, are then sent to see quarantine officers for an inspection.

The 2019-nCoV started to appear at the end of December, and it has quickly spread. On January 21, when the first case in the U.S. was discovered, BIV reported that the death toll was a mere three people, with about 200 people identified as being infected in countries including China (the mainland and the Hong Kong special administrative region), Taiwan, Thailand, Vietnam, Singapore, South Korea, Japan and the U.S.

The infection rate on January 21 was double what it was on January 20, and with the rate tripling in the following two days, there are fears that the disease’s spread is just starting to ramp up.

While health officials say that the world today is far more prepared for a new infectious virus than it was in 2003, it remains unclear whether technological advances will be sufficient to control the spread of the disease in the near term.

One irony, which could be viewed as a silver lining, is that Curry said that when viruses are particularly lethal, they tend to fade out quickly.

“Probably what led to [SARS’] more-or-less elimination from the world is that it made people too sick to spread the virus, so the virus actually burned out with what we think was a relatively low number of infections,” he said.

“Ironically, the less severe a virus is, the more likely people are to spread it.”