Mayor Kennedy Stewart acknowledged Thursday in his “state of the city” address that the city continues to lag behind in its goal to build more rental housing for lower to middle-income people.
0
Nov 8, 2019 1:41 PM By: Mike Howell 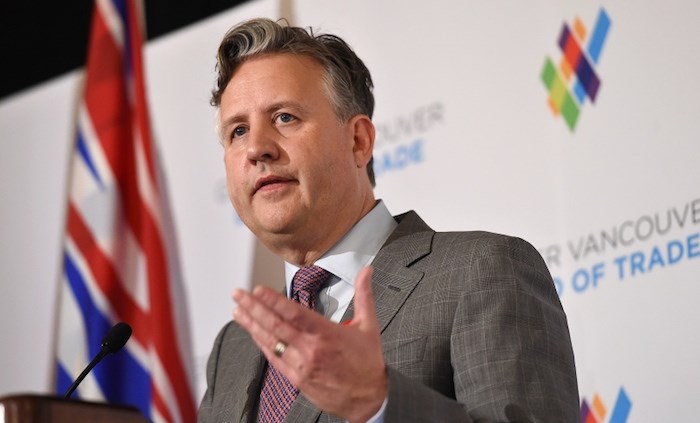 Mayor Kennedy Stewart delivered his ‘state of the city’ address Thursday to the Greater Vancouver Board of Trade. Photo by Dan Toulgoet/Vancouver Courier

Mayor Kennedy Stewart acknowledged Thursday in his “state of the city” address to the Greater Vancouver Board of Trade that the city continues to lag behind in its goal to build more rental housing for lower to middle-income people.

“Frankly speaking, we’re behind all our targets when it comes to providing workforce housing,” he told a business crowd at the Fairmont Hotel Vancouver on West Georgia Street.

The mayor was referring to the income band of households who earn $30,000 to $80,000 per year. His conclusion about missed targets was based on city data collected for the first three quarters of this year.

The city was closest to hitting its target for those earning $15,000 or less per year per household.

That’s why the city will continue to promote its incentive programs for developers to attract the necessary investment to build more purpose-built rental homes, Stewart said.

But the mayor acknowledged not all purpose-built rentals are affordable to all renters, who comprise more than 50 per cent of Vancouver residents.

Stewart delivered his speech a few hours after the City of Vancouver released statistics saying 2,897 units of housing were approved in the first three quarters of 2019.

Those numbers included 649 purpose-built rentals, which is only 32 per cent of the city’s annual target. The majority of those 649 units — 64 per cent — were approved under rental incentive programs for developers.

Other approvals included 601 townhouse units, 364 laneway houses and 529 social and supportive housing units. Overall, more than half of all 2,897 units were two and three bedrooms.

As he has stated repeatedly since he was elected, Stewart stressed the importance of lobbying the provincial and federal governments to obtain funding to advance housing projects in Vancouver.

He pointed to the $184 million the federal government announced in August towards the construction of 1,100 rental homes targeted to singles and families earning between $30,000 and $80,000 annually.

He also praised the city’s partnership with the provincial government, but didn’t refer to any specific projects, although the Courier reported in March that B.C. Housing said 2,450 units of affordable rentals were in the works in Vancouver.

Stewart said he would have more to announce in the coming weeks about funding from the B.C. government for projects in Vancouver.

While housing was a major focus of the mayor’s speech, he talked about two other topics he said voters wanted him to focus on in his four-year term: extending the yet-to-be constructed Broadway subway to the University of B.C., and combatting the overdose death crisis.

On the subway extension: “I don’t understand for the life of me why this line isn’t going all the way to UBC”

On the opioid crisis, and creating his emergency task force on overdoses: “Thanks to a lot of work from those who I think are the heroes of our city, the death rate has stabilized. But it still hasn’t begun to drop.”

Stewart, who ran as an independent candidate, was elected last fall and sworn in Nov. 5, 2018. He leads a mixed council of political parties, with no one party with a majority.

The Courier polled nine councillors last week about their first year in office, with seven choosing to answer a question that asked them to rate the performance of the mayor.

All were generally supportive of Stewart’s leadership, although COPE Coun. Jean Swanson said she was disappointed “he doesn’t put more effort into non-market housing instead of relying on the market and private developers.”

NPA Coun. Colleen Hardwick didn’t respond to the question, but commented generally on whether the new council — with Stewart at the helm — had made progress in its first year.

“A year ago, Vancouverites voted for change, and in my opinion that change has not been achieved,” Hardwick said.

“The plans that had been put in place under the Vision Vancouver regime decade continue to be executed by staff. For this reason, I find where we are a year into the term somewhat discouraging.”

The last time — and first time — the mayor spoke to a board of trade audience was in April. That speech, too, was focused mainly on housing, with Stewart telling the crowd “what we have to stop doing is using the word ‘affordable.’ I think that [word] makes people angry.”

“We’ve been trying to dampen that down in council and not to say, ‘We just built a whole bunch of affordable housing,’” he said at the time.

“We’ll just say, ‘No, we’ve just built a whole bunch of market rental housing, and that’s good.’ That’s a good thing. Take ownership and say this is important because it is for a certain group of people we need for the economy [to thrive] in this city.”

The city says nearly 50 per cent will serve households earning less than $80,000 per year. Two thirds will be available for renters, with 40 per cent with two or three bedrooms. Much of it is expected to be built by the private sector.