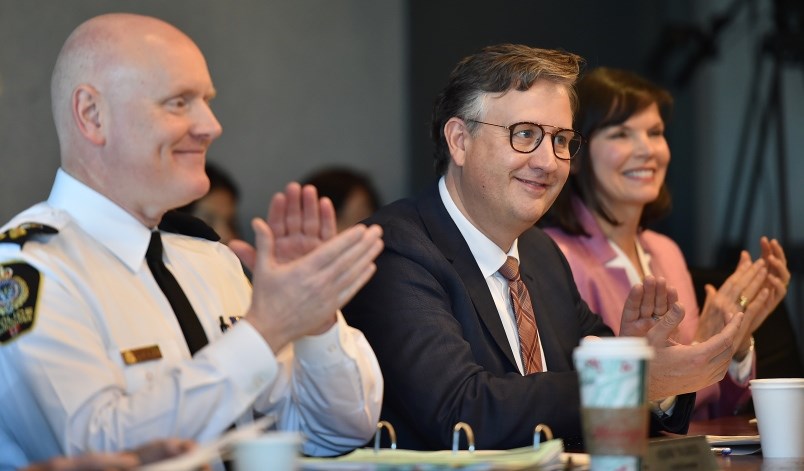 Stewart said he is preparing a submission for the committee that will request the controversial practice come to an end in Vancouver, where police data continues to show an overrepresentation of street checks conducted on Indigenous and Black people.

“I still stand by the unanimous vote at council [in July 2020] that street checks should be banned,” the mayor told Glacier Media in a recent interview.

Stewart, however, did not articulate that position when a VPD street check audit report went before the Vancouver Police Board Feb. 18. Stewart doubles as chairperson of the board, whose eight members are appointed by the provincial and city government.

The board has the authority to stop the practice but a memo attached to the audit report from the board’s governance committee said the checks remain “an important public safety tool.”

“My role [at police board] is the chair,” said the mayor, when asked why he didn’t renew his call at the meeting to ban checks.

“I can ask questions but I can’t vote or make motions, so I try to respect that as chair and just run the meeting. So I was just really listening to what the board’s response was to the report.”

Board member Rachel Roy, who has questioned the need for street checks, was ill and absent from the meeting. Roy told Glacier Media in a later interview that she was disappointed to have missed an opportunity to publicly discuss the audit.

In September 2020, Roy requested the board — not the department — collect feedback over the next three months from community groups and those people who continue to be stopped by police.

The purpose of her request was to hear from the public in advance of the audit report.

“What I want to see is a formal public discussion about the new street check policy and how it’s actually impacting racialized communities, and how we can improve the dialogue between the department and affected communities,” said Roy at the time, before the board voted 4-2 to defer her motion to its governance committee.

In an interview last week, Roy said she will follow up with her concerns at a future meeting. The next public board meeting is scheduled for April 15.

“This issue is not going away anytime soon, if I have something to say about it,” she said.

Vancouver police data for the period Jan. 15 to Dec. 31, 2020 shows officers conducted 75 street checks involving 87 people across all four policing districts, including 20 on Indigenous people and two on Black people.

Police said the statistics showed a 94 per cent decrease over the previous year — a drop attributed to new province-wide policing standards implemented in January 2020 in combination with the simultaneous adoption of a VPD policy on street checks.

The continuation of the practice has been criticized by the Union of B.C. Indian Chiefs, the B.C. Civil Liberties Association, the WISH Drop-in Centre Society and Hogan’s Alley Society.

The human rights groups said in a statement Feb. 17 that the VPD’s audit report “normalizes” street checks and noted the data continues to show the practice disproportionately targets Indigenous and Black communities.

The board agreed at its Feb. 18 meeting that it would invite the groups and others to discuss the audit report.

Other people police checked last year included 49 Caucasians, seven South Asians, seven Asians, one Middle Eastern and one Hispanic. Of the 87 people, 68 were men and 19 female.

Police said 87 per cent of the people checked were a suspect in “an average of 19.5 different criminal investigations prior to the street check.”

Police say they use street checks to make enquiries into “reasonable and legitimate” public safety concerns such as suspicious activity, crime prevention or intelligence gathering.

Eleven of the checks on Indigenous people last year stemmed from an officer’s concern about a person’s well-being or safety, according to the audit report.

Meanwhile, the legislature’s “Special Committee on Reforming the Police Act” announced Monday that it is accepting submissions from the public until April 30, 2021.

Written, audio and video submissions will be accepted, with some people and organizations invited to present to the committee at a later date. All hearings will be conducted by video teleconference.

Part of the committee’s role will be to examine the extent of systemic racism within police agencies. The committee has said a reformed Act should ensure consistency with the United Nations Declaration on the Rights of Indigenous Peoples.

Doug Routley, MLA for Nanaimo-North Cowichan, is the chairperson of the 10-member committee, which includes former Surrey RCMP district commander Garry Begg, who is the MLA for Surrey-Guildford.