Ten temporary modular housing sites built in Vancouver to house people who were previously homeless generated 1,380 police calls over the first eight months of this year.
Sep 21, 2019 11:17 AM By: Mike Howell

Ten temporary modular housing sites built in Vancouver to house people who were previously homeless generated 1,380 police calls over the first eight months of this year. 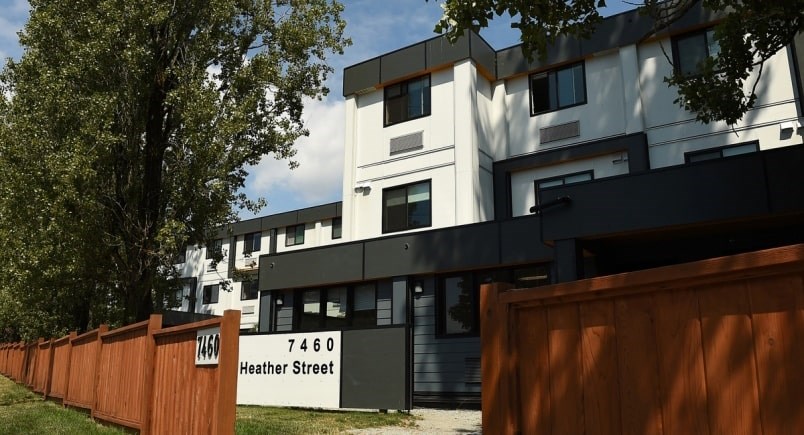 The B.C. government released a report Tuesday touting the success of temporary modular housing buildings in Vancouver and Surrey. Pictured is the Reiderman Residences in Marpole. Photo Dan Toulgoet

Statistics obtained from the Vancouver Police Department show most of the calls – 233 – were related to missing person files, with 108 alone coming from the New Beginnings complex at 5077 and 5095 Heather St.

The same site, which has two buildings with a total of 98 homes, was responsible for generating the most overall calls – 240 from January to August – by one complex.

Across all 10 sites, calls for disturbances (130), which could mean people arguing or someone playing loud music, and requests to remove unwanted persons (144) who show up to a residence were other calls at the top of the list.

A total of 77 calls involved checking on the well-being of a person.

Police responded to New Beginnings for disturbance calls (19), unwanted persons (10), domestic disputes in progress (10), to assist paramedics and firefighters (nine) and check on the well-being of a person (eight).

Police also answered 25 “assist Mental Health Act” calls related to the property. That type of call typically comes as a request from a doctor or health care worker to help return a person to hospital for treatment, said Sgt. Aaron Roed, a VPD media relations officer.

“Wherever they may be [in the city],” said Roed, who didn’t have a breakdown available of the percentage of calls generated by tenants, management, neighbours or people in the area of the complex on Heather Street.

New Beginnings is located on property owned by three local nations – the Musqueam, Squamish and Tsleil-Waututh – and the Canada Lands Company. The land used to be home to the RCMP’s B.C. headquarters.

Priority of tenancy in the two buildings is given to homeless Indigenous people, who make up 40 per cent of Vancouver’s homeless population. One building is strictly for women and the other is co-ed.

Kevin Eaton, the society’s director of housing operations, said staff filed the 108 missing person reports as a standard practice when tenants haven’t been seen for 72 hours.

“It’s not necessarily that they’re indeed missing,” said Eaton, noting the complex is far removed from neighbourhoods where tenants used to reside.

“This isn’t their typical community, their neighbourhood. So a lot of our folks are sort of migrating back to where they were originally from – whether that’s the East Side, the Downtown Eastside. They’ll go meander into those areas for a week or two weeks, and then eventually make their way back to their homes.”

Eaton said nothing untoward happened to the missing tenants in the 108 cases. He said having staff file missing person reports to police provides an extra measure of caution for tenants.

Eaton described disturbance calls as tenants squabbling over something, or a person playing loud music. He said the type of police calls tell him the housing is working for tenants.

“The shift in change in our folks, in their mentalities and where their particular walk is leading them has definitely been uplifted,” Eaton said.

Roed noted the statistics for all buildings capture the calls to the addresses of the sites, but don’t account for calls about incidents that may have occurred one block from a property involving tenants.

The fewest number of calls for police service – nine calls in eight months this year – was to the Reiderman Residences at 7460 and 7430 Heather St.

The calls were related to threats (two), disturbances (two) and individual cases involving a weapon, theft, fraud, property and to check on the well-being of a person.

The two-building site in Marpole was the first of the 10 modular housing complexes to be built and opened in Vancouver under a provincial government-funded $88-million program that began two years ago.

The project generated the most pushback of all the sites from neighbours and Vancouver residents, who held protests outside the property and at city hall, drafted a petition to stop its construction and launched unsuccessful court action.

There were other groups, including students and church members, who supported the construction of the complex, which could be in place for three to five years.

Overall, the statistics show a low number of calls for serious crimes at the 10 properties, although a “home invasion” was reported in March at Aneki Housing for Women at 525 Powell St. and a sexual assault in April at Sarah Ross House at 4480 Kaslo St.

Six calls to the 10 sites were related to drugs.

Other types of calls at the 10 sites included reports of suspicious circumstances and persons, warrants, mischief, suicidal persons, sudden deaths and a next of kin notification.

Though the statistics cover January to August of this year, not all buildings were open or fully tenanted at the beginning of the year, including Nora Hendrix Place at 258 Union St., which opened in March.

Police statistics for 2018 show a total of 307 calls dispatched to eight of the sites, with Aneki Housing for Women and Chartrand Place at 1131 Franklin St. totaling 79 calls each.

Most of the calls at Aneki in 2018 were for disturbances (12) and missing person reports (seven). At Chartrand Place, disturbances (15) and unwanted persons (11) were most common. 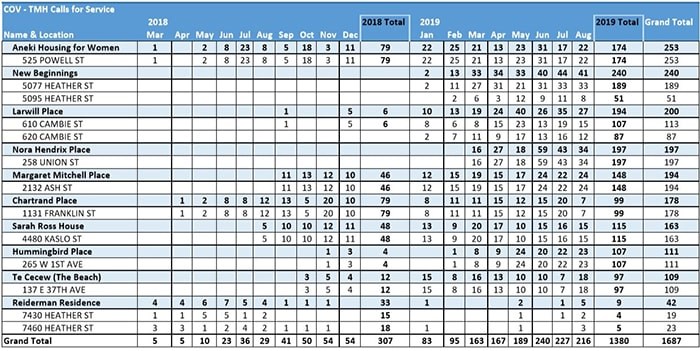 The city has said 80 per cent of the 605 tenants living at the 10 properties were previously homeless. Others were at risk of losing housing or living in precarious housing situations, the city has said.

At each building, non-profit operators offer access to health and social services, as well as life skills training for tenants, some of whom are living with mental illness, a drug addiction, or both.

At least two meals a day are also provided.

Boyle said the police statistics obtained by the Courier line up with the anecdotal reports she’s heard from operators and tenants of modular housing buildings.

“When people who are homeless – and  living a very survival-based life – have a chance to move inside and aren’t needing to rely on small criminal acts just to survive and keep themselves safe, then those crime numbers go down,” she said.

“I’m glad to see it, of course, and I hope it helps residents in neighbourhoods feel reassured and more comfortable with more of this housing moving into our neighbourhoods.”

Added Boyle: “As we know from countless studies, housing is an important step in helping people put their lives back together.”

The B.C. government released a report Sept. 10 that concluded temporary modular housing in Vancouver and Surrey was improving quality of life for tenants and reducing their use of emergency services.

The report said the findings were based on a voluntary tenant survey, with a 41 per cent response rate across the seven buildings. Three staff from each building was interviewed.

Participants in the survey in Vancouver included tenants and staff of the Reiderman Residences, Sarah Ross House, Chartrand Place and Aneki Housing for Women.