More than 119 people that were previously camping in Oppenheimer Park have accepted the city’s housing offer, the City of Vancouver said in a statement.
0
Aug 24, 2019 11:10 AM By: Jessica Kerr

More than 119 people that were previously camping in Oppenheimer Park have accepted the city’s housing offer, the City of Vancouver said in a statement.

“The city plans to work with approximately 30 additional people in the park to accept offers for the remaining homes today,” the city said. 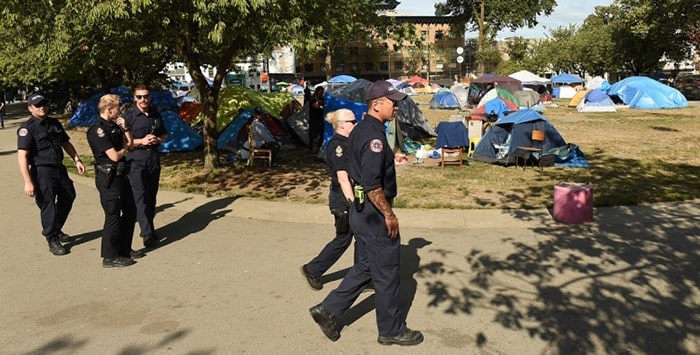 Vancouver Park Board general manager Malcolm Bromley issued an order Monday morning to those living in tents in Oppenheimer Park. They must be out by 6 p.m. on Aug. 21. Photo: Dan Toulgoet

“A number of shelter spaces are also available for anyone else still sleeping in the park.”

The statement also says that the park board has not yet issued “any direction to staff to seek an injunction” to remove the rest of the campers out of the park.

The order for campers to vacate the park was issued by Vancouver Park Board general manager Malcolm Bromley Monday morning with a deadline of 6 p.m. on Wednesday, Aug. 21, saying the encampment contravenes a park board bylaw preventing anyone from setting up a tent, shelter or building in a city park. 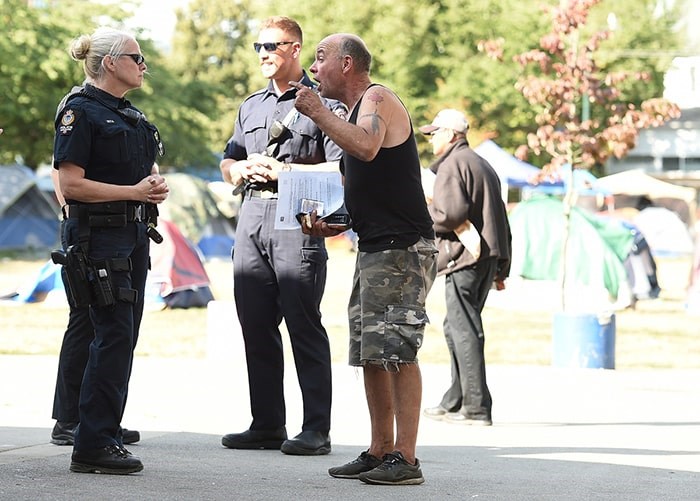 The Vancouver Police Department assisted park board staff Monday morning as campers at Oppenheimer Park were told they have to re-located into housing offered by the city or BC Housing by Wednesday night. Photo: Dan Toulgoet

The tent city has been in place in varying degrees and sizes since 2014 but has grown significantly in recent months — peaking at more than 140 people and 200 structures earlier this week.