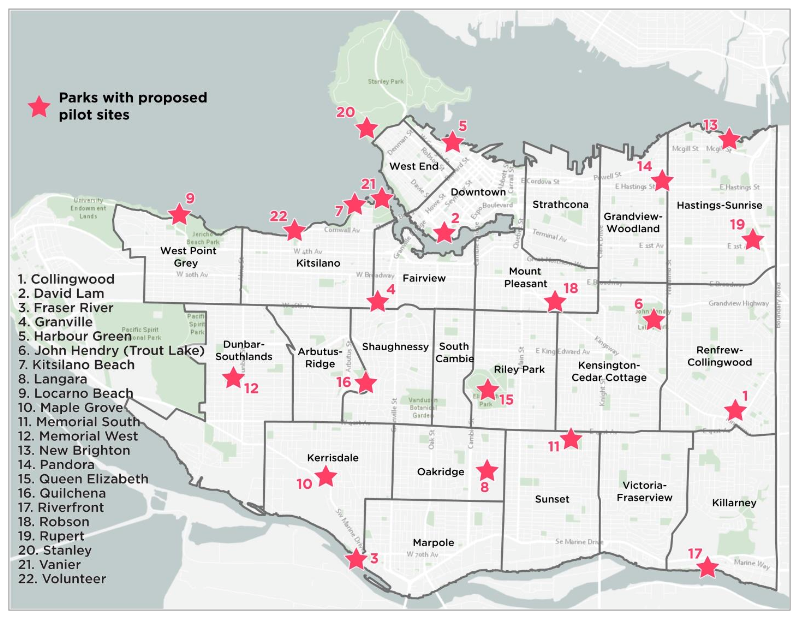 Vancouver park board staff has proposed 22 park sites in the city for a three-month trial to allow legal consumption of alcohol. Image courtesy Vancouver park board
A revised plan by the park board to allow people to legally drink alcohol in parks has expanded from 10 to 22 sites across the city and now includes David Lam Park in Yaletown and an area at Kitsilano Beach.

A staff report that goes before park commissioners Monday lists each park but warns a trial this summer may be delayed because of an ongoing tangle with the provincial government over jurisdiction.

The board needs to ensure the provincial government amends the B.C. Liquor Control and Licensing Act — as it has signaled it would — to give the board authority to allow the trial.

However, staff has been informed the current B.C. legislature agenda is full “and there is no ability to process the required changes to the Act in time for a pilot [program] this summer,” the report said.

In the interim, staff has proposed commissioners submit a request to the Lieutenant Governor-in-Council to make a regulation authorizing the public consumption of alcohol in Vancouver parks.

“It is anticipated that this regulation could be made in early August to support the pilot, however all authority will continue to rest with the province until the legislative changes are made,” the report said.

“This means the board will not have the ability to amend bylaws directly to address any potential issues that may arise during the pilot, as the B.C. cabinet would need to amend the regulation if required.”

The report added: “This could significantly impact the timeliness of any response to an identified risk, potentially increasing the risk to the public in Vancouver in the meantime, and may also pose an additional burden on the province.”

That said, staff recommends commissioners approve the revised plan until it clears up legal concerns with the province, with a possible launch of mid-August for the trial.

The 22 proposed sites call for legal drinking on portions of the green space, with detailed maps attached to the staff report posted on the park board’s website.

• Locarno Beach (northeast treed and grass area, but not beach)

• New Brighton (three areas — west side, excluding hillside and dog park; north and south side of pool outside fence)

• Quilchena (section south of the path)

The new staff report is one commissioners requested earlier this month because some believed the initial proposal for 10 legal sites wasn’t sufficient and would ultimately turn the parks into public beer gardens.

Comm. Dave Demers asked that all of the city’s 23 neighbourhoods be considered and that staff explore the option of tying the consumption of alcohol to a meal.

Comm. John Coupar also requested some of the concessions at the parks be allowed to sell off-sales, as long as alcohol was consumed on site.

Staff settled on 22 parks, but none are located in Strathcona, where that neighbourhood’s biggest park — Strathcona Park — is currently home to the city’s largest homeless encampment.

Staff rejected the request to tie consumption of alcohol to food.

“Both the [Vancouver Police Department] and park rangers suggest that while having food locations nearby and accessible is advisable, making it mandatory would be unenforceable,” the report said.

Selling alcohol at concessions was also rejected because staff said applying for liquor licences is a lengthy process. In addition, such a move would require modifications to concessions for secure storage of alcohol, which couldn’t be completed in time for launch of the trial.

Staff’s choice of David Lam Park could receive some pushback from residents who continue to complain about crime and disorder in Yaletown and the surrounding area.

Vancouver police announced earlier this month that it deployed more officers to the neighbourhood because of residents’ concerns related to drug use and problems associated to temporary housing for homeless people.

Commissioners have made it clear in previous meetings and in interviews with Glacier Media that the purpose of the three-month trial is for people to legally and responsibly consume a drink with friends or family in a park — not to hold parties.

While illegal drinking is commonplace at parks and beaches, the move by the park board encourages those afraid to break the law to have a drink and enjoy the outdoors during the pandemic.

The commissioners’ counterparts at city hall are simultaneously working on a plan to allow legal drinking in select public spaces such as plazas.

Commissioners and city council have both been warned by Dr. Patricia Daly, the chief medical health officer for Vancouver Coastal Health, about the consequences of allowing legal drinking.

That includes increased harms to people’s health, more alcohol-related hospitalizations and the inability for park board staff to adequately monitor a trial that would challenge physical distancing measures during the pandemic.

Though the VPD is on record of supporting a trial, the staff report outlines concerns from officers, including public safety, underage drinkers, overconsumption, public urination and other disturbance calls related to alcohol.

“Regarding the expansion of the pilot to 22 sites, VPD indicated that they do not have the resources to continually check on these locations and the monitoring will primarily fall back up the park board staff,” the report said.

“Staff will work collaboratively with both the VPD and rangers during the pilot process to identify challenges and opportunities. In the event that the pilot causes a significant increase of park ranger calls for service, existing ranger resources will need to be pulled away from other services deemed lower in priority.”

The issue of rangers’ workload was mentioned last week during the board’s debate over revising a bylaw that allows a homeless person to sleep in a park overnight.

Commissioners heard July 13 that 85 per cent of rangers’ work is related to monitoring and managing homeless shelter activity in parks. The board says it employs 35 rangers, with only four considered full-time.

The trial, if it goes ahead, is expected to last until Thanksgiving Day long weekend in October. The board meets Monday at 6:30 p.m. to discuss the staff report.