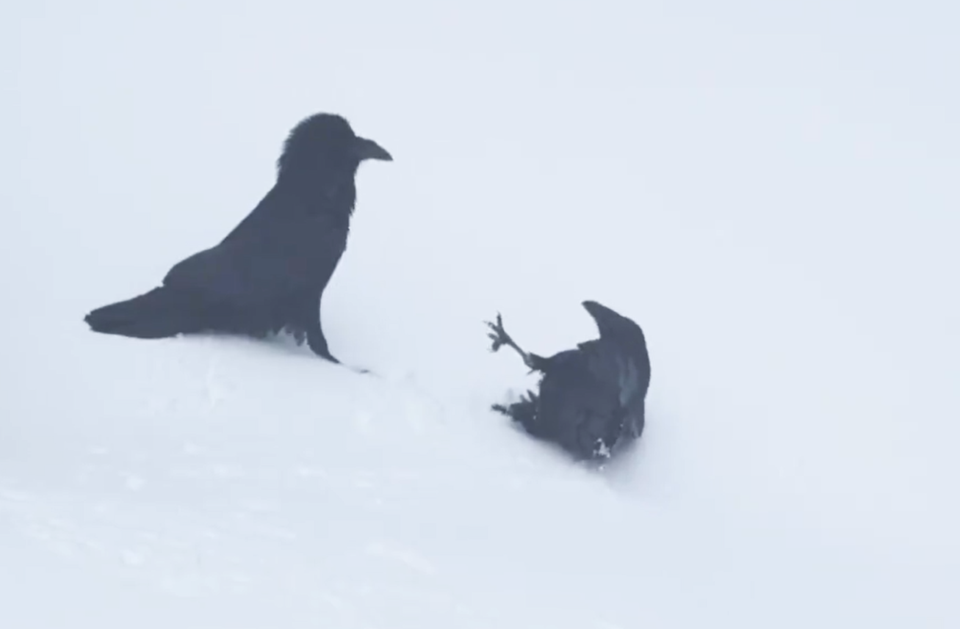 A pair of ravens play in the snow on Mt. Seymour.June Hunter

June Hunter knows raven calls well, and that's why when she heard some unusual calls last week she had to go investigate.

The photographer was snowshoeing around Mt. Seymour. As she was returning to the car she heard the strange calls coming through the foggy forest.

"So I'm walking down and then below the bank I saw a group of six ravens," she tells Vancouver Is Awesome.

Hunter, who specializes in Corvidae photography (so crows, ravens, Stellar's jays), recognized that the birds were actually playing in the snow, like you might expect a puppy to do.

"With these ones, I could see these two in particular were having this little game," she says, describing the video she got of the playful ravens.

They were poking their heads into the snow, diving in and rolling around.

"It just makes me so happy when I see them," she says. "When I see them playing it's like this extra joy to see."

She was excited to share the clip with others, hoping it would bring a smile to people.

"Things are pretty stressful now, people need a break," she says. "It made me feel so happy."

Because she specializes in Corvidae, her followers are often fans of ravens, and the clip took off.

The video, which she posted across platforms, has millions of views she says, but she isn't sure exactly how many. A company that licenses viral videos even called her, but she decided to just leave the clip as is.

"I didn't do that, I thought I'd just let it run its course and spread its raven joy throughout the universe," she says.

It wasn't the first time she caught ravens being playful in the snow, a couple years ago she came across a pair making a snowball (yes there's a video of that, too).

Hunter has actually been taking photos of crows and their cousins for 15 years, writing about them as well. She started off focusing on crows and ravens because their black feathers looked good against the backdrop of Vancouver, "like punctuation in the landscape."

"The thing is, crows and ravens, there's something special about them," she says. "They're a gateway to the rest of the natural world; try to capture that in my photographs."

The Corvidae family are known for their intelligence, and Hunter says they have a sense of humour as well, noting a young crow near her house likes to hang upside down from a wire and taunt an adult crow below.

She adds that she's "a crazy crow lady now" and has named some of the local groups around her neighbourhood (there are Marvin and Mavis, the Walkers and White Wing, among others). The trick is paying attention, she adds, since crows often have odd or interesting behaviour, if you watch closely.

"If crows aren't cheering me up it's time to go up into the mountains and get a dose of raven therapy," she adds.

It's something she hopes connects with others when they watch the video.

"I'm just very happy the video has spread far and wide," Hunter says. "My ultimate goal is people will see the ravens, will see how amazing they are, and ultimately feel connected to the natural world."

And she thinks watching them play is a great way to make that connection.

"Even though genetically and evolutionarily they're completely different from us, the more you watch them the more kinship you feel with them," she says.