All police departments in the province must adopt and comply with new standards regarding the practice of checking and stopping citizens
Jan 21, 2020 2:45 PM By: Mike Howell 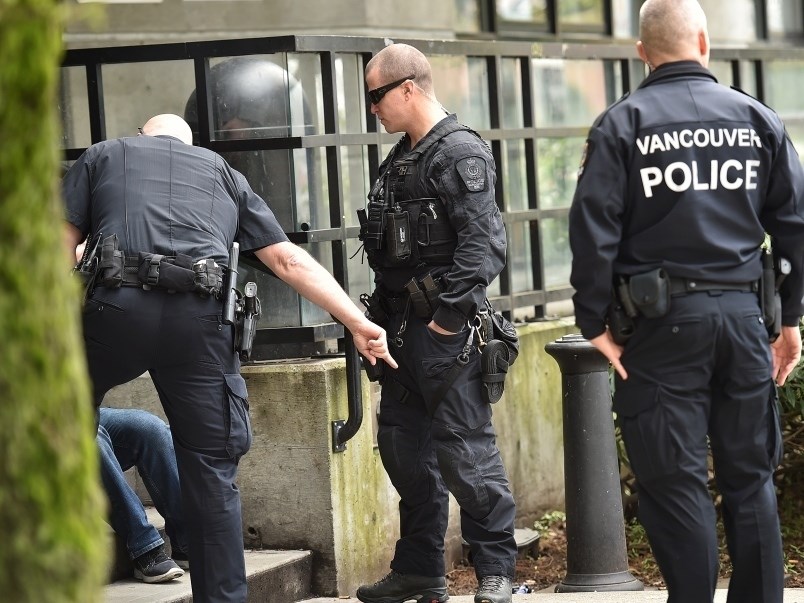 The Vancouver Police Department now has a street check policy in place based on new province-wide standards that came into effect this month. Photo Dan Toulgoet

The Vancouver Police Department has a new policy in place for how its officers conduct street checks and makes it clear that no person can be stopped randomly or solely because of their race.

The policy came into effect Jan. 7 to meet the B.C. government’s Jan. 15 deadline for all police departments in the province to adopt and comply with new standards regarding the practice of checking and stopping citizens.

In Vancouver’s case, the government requires a police board to have written policy in place for officers that is consistent with the Canadian Charter of Rights and Freedoms for citizens.

The new policy was posted Tuesday on the Vancouver Police Board’s website in advance of the board’s first public meeting of 2020 on Thursday.

While the new policy outlines guidelines for officers, a report from the police department emphasizes the continued need for street checks, which police say have been key to solving crimes, including homicides.

The report cited an example from Dec. 3, 2019 in Kitsilano when officers spotted a male looking into vehicles at 5 a.m.

Officers saw him approach a residence. When police asked the male if he lived at the place, he said “no” and fled. Police arrested him shortly after and learned he had a warrant for breach of probation.

The male, who was armed with bear spray, was a suspect in 25 criminal incidents, most of which were tied to property crime, the report said.

It is such an investigation that could be hampered by the new provincial policing standards related to street checks, said the report, which didn’t elaborate specifically on the reasons for concern.

“It is these types of suspicious behaviours [e.g., looking into vehicles, etc.] that police officers regularly observe and proactively investigate, and the new standard on police stops would potentially affect this type of investigation,” the report said.

“Nonetheless, there have been concerns about the practice of street checks in Nova Scotia, Quebec, Ontario, Saskatchewan, Alberta, B.C. and the United States. It is these concerns that the standard and the VPD policy seeks to address.”

That data prompted the B.C. Civil Liberties Association and the Union of B.C. Indian Chiefs to lodge complaints with the Office of the Police Complaint Commissioner.

The organizations said the data created “a strong suggestion” that street checks were being conducted in a discriminatory matter, which Police Chief Adam Palmer flatly denied.

“I’m a strong believer that our officers are doing a great job every day out there and street checks are used very judiciously in this city,” Palmer told reporters in September 2018.

Palmer’s denial was supported by his department’s review of the data.

The department, however, recommended the board adopt six recommendations to ensure the public has “complete confidence” that the practice is not discriminatory towards a particular group of people.

The recommendations, which were adopted last fall, included additional training for officers, releasing street check data annually and assigning an officer to improve communication with the Indigenous community.

Another recommendation was formalizing the department’s street check standards into policy — which the board did Jan. 7 in approving the new policy — so that it adheres with new provincial standards.

Discussion around that review led to the board hiring an independent consultant to conduct a study of the Vancouver police’s practice of street checks.

That report is expected to go before the board next month.

The provincial policing standards document for street checks recognized that many people stopped by a police officer feel compelled to remain and answer questions, regardless of the circumstances.

“This is especially the case when the person stopped is vulnerable, relies on public space to live, is Indigenous or racialized,” said the document, which accompanies the VPD report and policy.

“Informing a person that their participation is voluntary may not be sufficient on its own and additional steps may need to be taken to ensure the person does not feel compelled to cooperate.”

Meghan McDermott, acting policy director at the B.C. Civil Liberties Association, said the organization wouldn’t comment on the VPD’s new policy until Thursday when it issues a news release.

Thursday’s police board meeting begins at 1 p.m. at the Cambie Street precinct of the police department. The board will also hold an in-camera meeting that day to discuss why police mistakenly arrested and handcuffed an Indigenous man and his 12-year-old granddaughter at a downtown branch of BMO.