An arbutus tree in Kitsilano has become the centre of a dispute between the City of Vancouver and a long-time resident.
0
Aug 30, 2019 4:30 PM By: Vancouver Courier

An arbutus tree in Kitsilano has become the centre of a dispute between the City of Vancouver and a long-time resident. 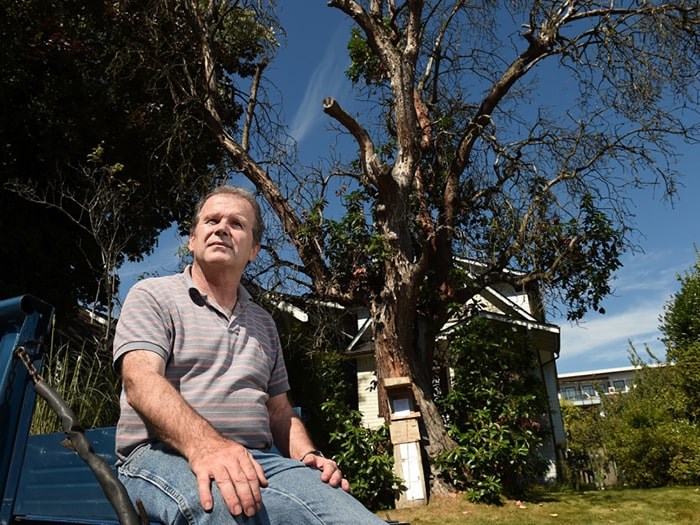 Marcus Kennedy says the 100-year-old arbutus tree in the front yard of his Kitsilano home is worth saving. Photo Dan Toulgoet

On Aug. 19, Marcus Kennedy came home to find a letter on his front porch, giving him five days’ notice that the city was planning to remove the large and — according to the notice — 85 per cent dead arbutus tree that straddles his front yard’s property line on West Fifth.

“What I would have expected from the City of Vancouver is a letter to prune and trim the 100-year-old Arbutus,” Kennedy told the Courier in an email. “Not to clear cut it and grind the stump.”

“Imagine if you were a senior or a family on vacation, how would you feel returning home to 100-year-old stump after the CoV cut your tree?” he said.

Kennedy says he’s taken care of the tree for the last 36 years and says various “experts” have estimated the tree’s age to be 100 years. He says the arbutus can and should be saved. The city, on the other hand, is worried about whether the tree poses a safety risk. The determination as to whether the tree is on private or public land will decide who gets final say on the matter.

Kennedy said that on Aug. 23, a city of Vancouver employee came to his house and said there would be “no consideration about saving the tree” if it is determined the tree is on city land. “He said they have expedited a survey to be done ASAP to see where 51 per cent of the tree lies and will clear cut the tree ASAP if it is not 51 per cent on my side of the property line.”

While awaiting the survey, which should be completed next week, Kennedy hired the services of Arbutus Tree Service to give him an estimate on saving the tree ($1,653.75). He also organized a neighbourhood petition to save the tree, which now has more than 90 signatures.

“In these modern times with a very high level of tree protection and conservation, the dead wood branches can be cut and the main trunk and live branches can be saved and there will be no hazard remaining,” Kennedy wrote in an email to the park board and city.

The stance is backed by arborist Norm Oberson, who inspected the tree on Monday for the Arbutus Tree Service estimate.

“A lot of the Arbutus trees are dying,” Oberson told the Courier. “It’s been going around for the last 10, 15 years. But they do come back. They regenerate themselves.” 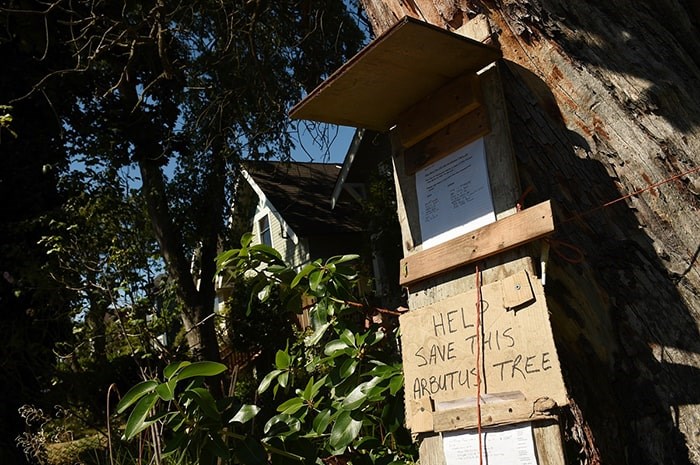 A petition to save the tree has collected more than 90 signatures so far. Photo Dan Toulgoet

Arbutus trees often die from fungal infection, but it’s not always easy to determine. A City of Nanaimo document on the diseases affecting arbutus trees found that “the arbutus population has been declining at an alarming rate for the past several years, but there is no clear answer to the exact cause of arbutus death.”

No one disputes that much of the wood on the tree in question is dead but, according to Oberson, this does not necessarily mean the tree has to be removed. He points to the new growth shoots around the base of the tree as a sign of recovery and says that pruning certain deadwood branches would be enough to ensure the tree could carry on its growing without posing a health and safety risk to passersby.

Diane Henry, who lives up the road and walks past the tree almost daily, said she understands how “tricky” the situation is.

“Every tree is precious in the neighbourhood,” said Henry, adding, “[But] as much as I love arbutus trees, I have to admit that looks dead.”

In the meantime, the city is waiting on the results of its survey, which should come back next week. City arborist Amit Gandha said in a phone call with the Courier that even if it is determined the tree stands mostly on public land, the city will first have a discussion with Kennedy about the fate of the tree.