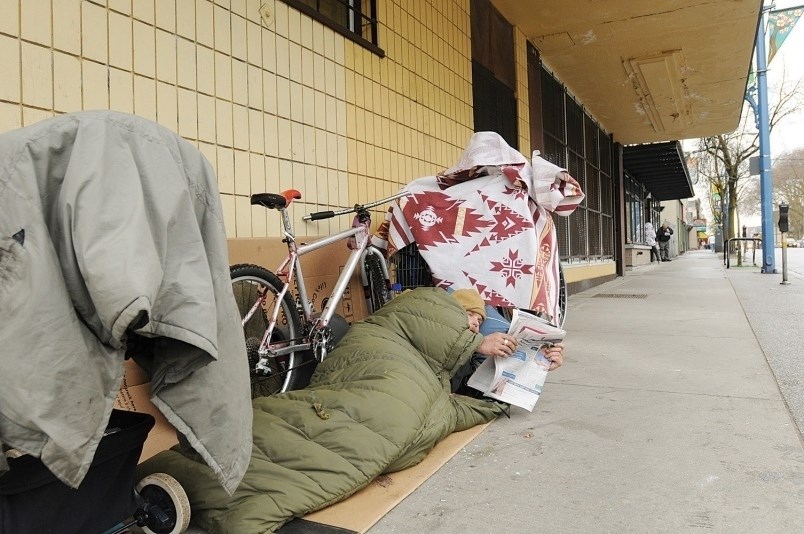 A report released Wednesday on a Metro Vancouver homeless count in March revealed a slight dip in population in Vancouver. File photo Dan Toulgoet
A homeless count conducted across the region in March has revealed that Vancouver saw a slight drop in the number of people living without a home — 2,095, compared to 2,223 counted in March 2019.

A report released by the B.C. Non-Profit Housing Association Wednesday showed that 1,548 people lived in some form of shelter at the time of the count and 547 resided on the street.

The count was conducted over 24 hours on March 3 and 4.

Vancouver made up the bulk of the homeless population counted in the region, with a total of 3,634 people spread across 11 municipalities. Volunteers counted 644 homeless people in Surrey, 209 in Langley, 124 in Burnaby and 123 in New Westminster.

In Vancouver, which participates in the Metro counts, the city has organized its own count each year for the last decade, with 2,223 people counted in a record-setting exercise last year.

While 128 fewer people counted in Vancouver this year is welcomed by Coun. Jean Swanson, she believes a count today would reveal the homeless population has grown since March.

Swanson pointed to the effect the COVID-19 pandemic has had on the city, with physical distancing measures keeping some of the most vulnerable residents from shelter.

The pandemic was declared the week after the homeless count.

“What COVID did was it revealed there’s a lot more homeless people than what was counted,” she said, noting operators of single-room-occupancy hotels began restricting visitors to adhere to physical distancing measures.

“That meant people couldn’t sleep in a room with their friends, so they were out on the street. So I think the homelessness has gone up.”

Shelters were also thinned out to prevent the transmission of the disease, while the long-running Oppenheimer Park homeless encampment was cleared, only to have camps subsequently pop up in a parking lot at CRAB park, followed by the massive tent city that now exists at Strathcona Park.

Swanson fears homelessness will only increase as long as welfare rates remain low and there are no rent controls on private single-room-occupancy hotels, where rents are hiked when a person moves out, or is evicted.

The eventual halt to the Canada Emergency Response Benefit for people out of work and a lifting in September of the provincial ban on evictions are other factors she cited in her concerns.

Swanson cautioned — as the report does — that the count doesn’t capture all homeless people in the city or across the region. As she has done for years in her role as an advocate and now a politician, she implored senior governments to fund and build more housing.

Mayor Kennedy Stewart pointed his frustration with the homelessness crisis at the federal government, which he said has yet to respond to his call for more modular housing and the purchase and refurbishment of single-room-occupancy hotels.

The strategy also promised to improve the availability and quality of housing and ensure at least 25 per cent of the funds went to projects for women, girls and their families.

“The maddening thing is the money is there. It’s just stuck in the bureaucracy.”

Stewart said he has a phone call scheduled this week with federal Finance Minister Bill Morneau to discuss the money. He also planned to stress the urgency for housing in a letter to Prime Minister Justin Trudeau.

“Either give us the 300 units, or tell us we’re not going to get them,” he said. “So if the federal government is not serious about this emergency COVID-based modular housing, then we’re going to have to look at other avenues.”

Stewart agreed with Swanson that a count today would reveal a higher number of homeless in Vancouver. He said investments from the provincial government in modular housing and the purchase of three hotels for permanent housing have helped “hold the line” on the city’s homeless population.

But, he said, the crisis may get to a point where the city has to take on some of the responsibility of senior governments when it comes to housing — a move he doesn’t believe would go over well with taxpayers.

For example, he said, if the city footed the estimated $60 million bill for 300 units of temporary modular housing, that would roughly equate to a 10 per cent property tax increase.

“If the federal government never invests here, then that’s a discussion we’ll have to have, and it will be a tough one. Property taxes were not really imagined in terms of providing capital for projects — not at this level.”

Simpson also pointed to the federal government for more help.

“We know the need for more supportive housing is urgent, which is why we’re continuing to build more homes across the province, and asking the federal government to step up and contribute capital dollars to support further acquisitions, modular housing and other long-term solutions,” Simpson said.

Since the pandemic was declared, he added, the provincial government, B.C. Housing, the City of Vancouver, Vancouver Coastal Health and non-profit agencies have secured almost 700 spaces in Vancouver for temporary accommodation.

“These facilities not only provide people immediate shelter and the ability to physically distance, many provide wraparound supports to help protect people’s health and safety,” Simpson said.

This year’s regional count introduced a question in the survey to capture a person’s racial identity. The question was added to better understand how racialized groups are impacted by homelessness.

A total of 98 people identified as Black, representing six per cent of a racialized group that represents only 1.2 per cent of the general population in the region. South Asian and Latin American people both represented three per cent of the homeless people surveyed.