There's a black market for cheese in Vancouver. Here's what you should know about it.

A look at the seedy world of cheese theft in Vancouver, and the things that you should know when you're approached by someone offering to sell you a discounted block of it
Sep 6, 2018 2:41 PM By: Bob Kronbauer 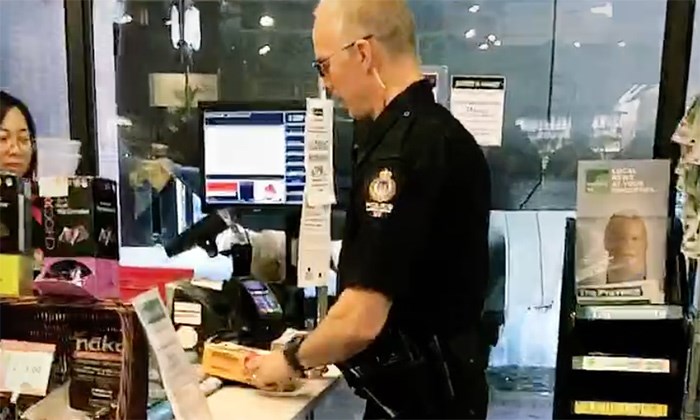 Kurtis Kolt shot a video of stolen cheese being returned by a VPD officer. Screengrab

Have you ever been approached by a stranger in a seedy Vancouver bar offering to sell you a cheap block of cheese? It turns out the city has a longstanding cheese black market, and the dairy product is in fact one of the most popular items that gets shoplifted in Vancouver.

Jason Robillard of the VPD tells us that others include batteries, razor blades and vitamins. Mostly because they’re easily concealed and are easy to offload for quick cash.

There’s no VPD policy specific to returning stolen cheese once it’s been recovered, however they always try to identify where it came from so that the cheeselifter can be charged.

Robillard says “If we can’t find the owners and it’s gonna go bad, the officers make a decision to make proper notes then dispose of it for health reasons.”

Sometimes it gets returned to the store that it came from, though what happens from that point varies.

Recently, a video surfaced on social media of a Vancouver police officer seemingly returning stolen cheese to a cashier at the Nesters Market in Gastown.

Shot on Tuesday afternoon by sommelier and wine writer Kurtis Kolt and posted to his Instagram Story, it shows an officer sliding a large block of what looks to be aged cheddar across the counter to a cashier.

Kolt tells us that “It seemed like it wasn’t the first time it had happened,” in that store. For the record, the sommelier also suggests pairing a BC Riesling with stolen cheese. He adds that over the years he’s seen people getting chased out of other stores for stealing cheese.

“But this was the first time I’ve seen the cheese come back.”

“Typically to put it back on the shelves would not be the best; it’s likely destroyed most of the time” says Robillard.

There are several scenarios in which it could be returned to shelves. One is if the thief were to conceal it in a bag and get nabbed inside the store.

And where does the cheese go that gets away? The black cheese market, of course.

Step into a seedy watering hole in the DTES after dark and there’s a fairly good chance chance you’ll be presented with a block at some point. Offered at a heavy discount by someone who probably doesn’t look like an authorized cheese vendor, it can be tempting.

However you’re going to want to turn that bargain away, because there’s a thing called “possession of stolen property”. It’s a crime.

If you buy hot cheese and the VPD nabs you for it, and you say you didn’t know it was stolen, that’s no defense; there’s a thing called “willful blindness”. Also a crime.

If you’re buying cheese in a bar from some random person, for super cheap, you should probably assume that it’s not on the level.

It’s also likely it’s been down somebody’s pants at some point in time, so there’s that.