In addition to voting for the mayor and council, school board trustees and park board commissioners on Oct. 20, voters will also be asked to weigh in on whether or not the city should borrow money to complete a number of projects.
0
Oct 9, 2018 7:15 AM By: Jessica Kerr

Every four years, Vancouverites vote on who we want to make decisions about how the city runs, but the electorate also gets to call a few of the shots.

In addition to voting for the mayor and council, school board trustees and park board commissioners on Oct. 20, voters will also be asked to weigh in on whether or not the city should borrow money to complete a number of projects — from upgrades to streets and bridges, traffic signals and technology to maintaining and renovating parks, community centres and fire halls. 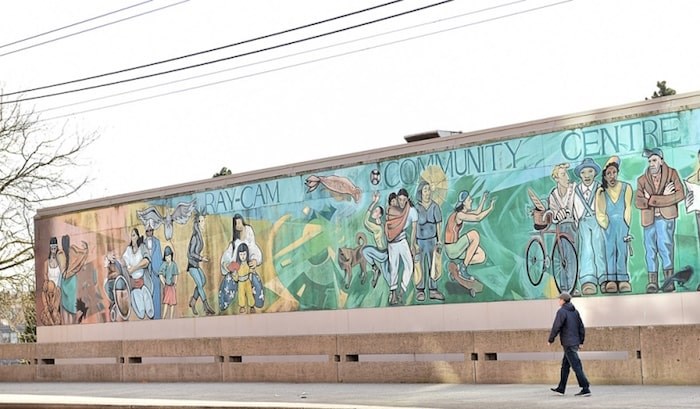 The planned renewal of Ray-Cam Co-Operative Centre is just one of the many projects that’s part of the 2019-2022 capital plan. Photo Dan Toulgoet

Every four years, city council approves a capital plan. Council approved the 2019-2022 plan back in July. It includes $2.8 billion in projects — $1.3 billion for building new assets and $1.5 billion to renovate or maintain existing assets.

“It’s quite a large plan and we fund it in a number of ways,” said Patrice Impey, Vancouver’s chief financial officer.

More than $1 billion of the plan is funded through existing reserve funds.

“That revenue that we take in and we put aside in a reserve and then that’s available for us to fund the capital,” Impey said.

About $600 million of the $2.8 billion is “in kind” from development contributions — for example, a developer building a condo also includes something for the city, like a daycare centre.

The city will take on debt to fund the remaining approximately $500 million.

A portion of that debt, about $200 million, is for utilities. Under the Vancouver Charter, council has the ability to borrow money to fund water and sewer projects.

“What appears on the ballot is only the debt that’s required to have authority from the electorate,” Impey said.

This time around that’s about $300 million for a myriad of projects — including repairs and structural work on Granville Bridge; major maintenance, replacement and enhancement of traffic signals and street lighting; and replacement or renewal of community centres, including Marpole-Oakridge, Britannia, Ray-Cam and West End.

In all, voters will be asked to answer yes or no to three capital plan questions on this year’s ballot for projects totalling $300 million.

Check out the questions ahead of time at vancouver.ca/your-government/capital-plan-borrowing.aspx.

To be approved, each question needs a 50 per cent majority plus one. Impey said that over the last five elections support for the capital plan borrowing questions has ranged from 50 per cent up to 75 per cent.

“When we determine how to use debt and when to use debt as a funding source, again it’s a small percentage of the overall $2.8 billion, but we really do a lot of work to make sure that we have our debt at a manageable level and we measure that really by our debt rating,” Impey said, noting that the city currently has a triple A credit rating from both Moodys and S&P.

She also said the city usually takes on debt over a 10-year period.