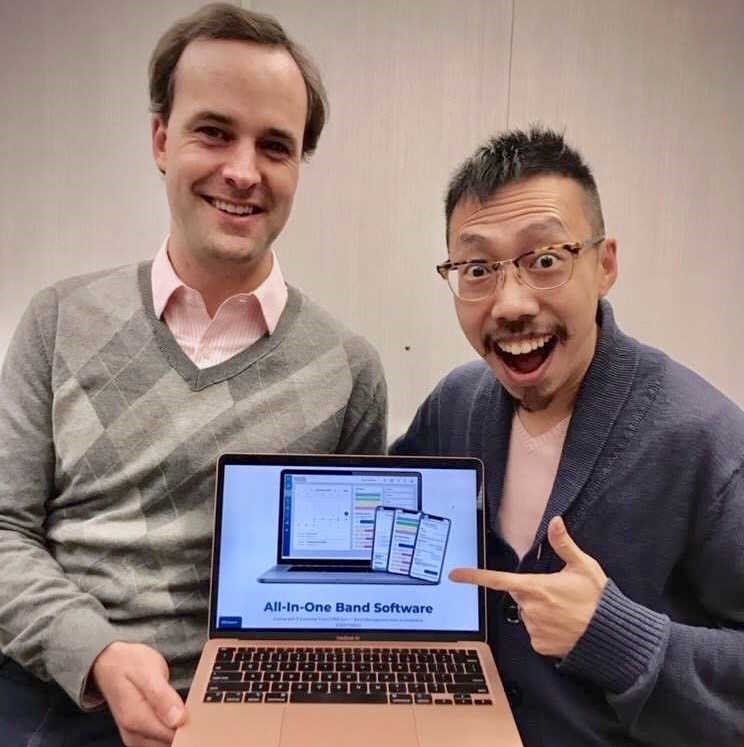 Reuben Avery (left) and Eric Tsang (right) are excited to be launching Back on Stage.Eric Tsang

While wedding bands and app developers may not sound like a common crossover, that's part of the reason Eric Tsang and Reuben Avery built a new app.

Called Back on Stage, the app aims to take on a bunch of the paperwork and administrative work musicians have to deal with. With 10 years of wedding band experience and none in software development, it may seem odd that musicians are behind the app, but Tsang says it's their experience as musicians and managers of a popular event band that inspired them.

"We love what we do on stage," he says. "But there's so much we hate, that’s mostly the business stuff."

An app wasn't initially what they set out to build, at first they were developing a system to better deal with managing the Phonix, their wedding band which has seen significant success (Tsang started off playing baritone saxophone). They manage a studio and associated businesses.

"At first we were thinking let's build something to help just us," Tsang says. "As we were building we thought it could help others."

He notes that musicians aren't usually known for their business acumen and a system that helps manage client requests, invoicing, finding gig musicians and other administrative details would be popular amongst the working musician population.

"For musicians, what we love to do...we sign up to play, to get on stage," Tsang explains. "Back on Stage handles everything that’s not on stage."

For band leaders it's a place to find musicians, organize and share sheet music with performers and make sure administrative details are in place. For musicians it's a place to get gigs and properly invoice those who hired them, something Tsang says many are not great at.

"There’s so many cool things that a musician would get geeky about with this app," he says.

Tsang notes that when they started out in the wedding band business 10 years ago they knew nothing then; they were just a bunch of recent grads from a music program. This time, while the musicians designed the app, they did get some help.

"We got a programmer to help us with the ones and zeroes," he explains.

The project picked up speed when the pandemic arrived.

"COVID kinda helped, it gave us a lot of time," he says, noting there wasn't much need for musicians at big events.

They launched it late last year and have already picked up some international interest.

"We have a lot of participating bands down in the States and in Australia we have a couple agencies that have signed up for us," he says, adding that a South African agency has just joined as well.

Locally there are bands involved, too; Tsang notes a bunch were beta testers.

With the pandemic situation changing, he says the hope is as the economy and personal business plans evolve, they'll become part of the new way to run bands. Beyond that they're looking at creating a way for event planners to join as well.