Athena, whose last name has been withheld, encourages anyone who is homeless to reach out and talk to service providers, counsellors, doctors or even their dog.
Apr 11, 2018 8:22 AM By: John Kurucz 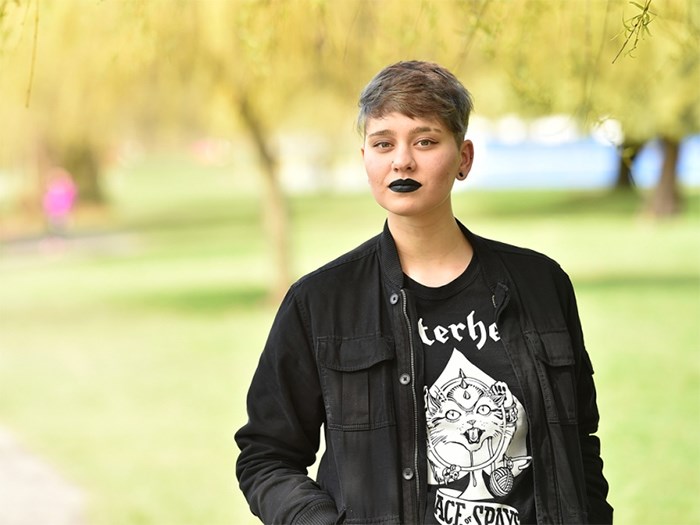 Athena, whose last name has been withheld, encourages anyone who is homeless to reach out and talk to service providers, counsellors, doctors or even their dog. Photograph By DAN TOULGOET

Homeless for the better part of the last year, Athena turned the corner not through couch surfing, dumpster diving or worse.

“It doesn’t matter if it’s with a doctor, counsellor, or even your dog, as weird as that sounds,” said Athena, whose identity has been withheld. “Vocalizing your situation is the most important part that you can do.”

Getting young people to talk is the central goal behind this week’s Metro Vancouver Youth Homeless Count. Having kicked off April 4 and running until April 12, the count aims to collect stories similar to Athena’s.

School counsellors, drop-in centre workers and other community centre employees are tasked with identifying, and then listening to the stories of those across the region between the ages of 13 and 24. The count is a separate, but complementary, piece to the regional homeless count Mero Vancouver does every three years. A youth component has been added this year specifically because service providers have seen gaps in the number of youth who identify as homeless every three years.

The 2017 regional homeless count found 378 youth under 25, including 199 children under 19. Young people accounted for 16 per cent of the homeless population in 2017 compared with 20 per cent three years earlier. They were the only age group where the count results showed a decrease.

Those numbers didn’t jive with what was seen in drop-in centres, gyms and shelters.

“The youth are definitely part of this hidden homeless population, so the point in time and methodology that’s used for the reginal counts is not particularly good at capturing that,” Metro Vancouver spokesperson Greg Valou told the Courier. “What we’ve heard from the community is that the numbers are much higher than what’s reflected in the regional count. That’s anecdotal, so now we want to see if we can get the data that backs that up and paints a more realistic picture.”

Asked to be referred to by the pronoun “they,” Athena’s reality is a reflection of what Copas alludes to and offers few details to the Courier during an interview. Athena is 20 and grew up in Surrey, but prefers to not delve into their upbringing or what happened in the years prior to being homeless.

Athena spent a year in Vancouver shelters before recently finding stable housing. They are now in post-secondary pursuing a career in social work.

“Being homeless is a crappy situation all around, but it does give you access to resources that you might not have had before,” Athena said. “You need to talk to people, you need to be open to talk to people. Some people aren’t there yet, which is totally fine.”

Anonymous surveys and magnet events — gatherings where free food and transit passes are doled out — are planned throughout the nine-day count to draw youth in and get them to talk.

The count is being conducted by the BC Non-Profit Housing Association and findings will be released at some point this summer. The final report will be shared with all levels of government and those in sectors specific to reversing homelessness.

“We really want to understand some of the true pathways in and out [of homelessness],” said Lorraine Copas, chair of the Metro Vancouver Homelessness Partnering Strategy community advisory board. “We’ll often see them dealing with challenging circumstances in their home and sometimes it’s just a case of escaping these situations and that means being on the street.”