Vancouverites set record in walking, biking and transit use in 2019 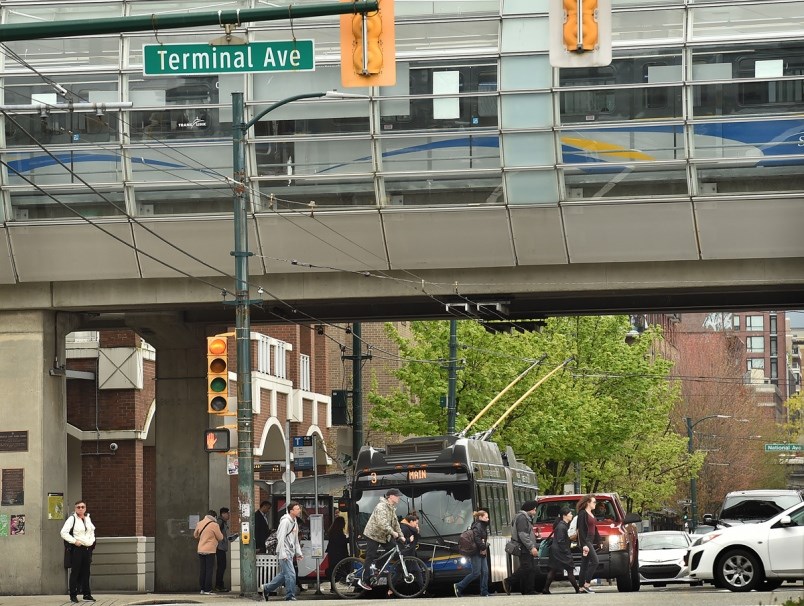 Vancouverites set a record in 2019 for walking, biking and transit use but the pandemic has had a negative effect on some of those transportation modes. File photo Dan Toulgoet
Vancouver saw the biggest increase ever last year in people choosing to walk, cycle or use transit to get around the city.

That was information Paul Storer, the city’s director of transportation, shared with city council Tuesday in what was a bit of a good news-bad news story when factoring in the effect the pandemic has recently had on how people get around Vancouver.

“This has thrown a big shock into our transportation system,” Storer said of the COVID-19 pandemic declared in March.

“We saw a big drop in trips and we also saw a bit of a shift away from sustainable modes. We saw transit ridership drop by about 80 per cent.”

March through April and May saw decreases in all non-automobile mode use in Vancouver, with car trips climbing to 49 per cent compared to the average of 47 per cent recorded in 2019, according to data Storer used in his presentation to council.

That trend was confirmed in a recent survey by the Greater Vancouver Board of Trade that found 36 per cent of Vancouverites planned to drive more because of concerns related to physical distancing.

City data indicated 19 per cent of former transit commuters were now driving. Another 27 per cent said they did not plan to board a bus or SkyTrain until they can get vaccinated against COVID-19.

“Prior to COVID, we were seeing pretty consistent and good sustainable mode share,” said Storer, noting data also indicated some people want to bike or walk more, but didn’t say what was preventing the shift.

“That’s really where the opportunity is, and where we’re really well positioned in COVID with a well-developed active transportation network to help provide people options to walk or bike more.”

The push now is to continue the trend the city has seen with increases in walking, biking and transit that was first tracked in 2013.

Last year, the three modes of transportation accounted for 54.1 per cent of all trips recorded over one day of the week by 2,653 participants in a city survey conducted last fall.

Storer shared that information via a PowerPoint summary of the survey.

The increase in using various modes of transportation in 2019 eclipsed the previous year’s number of 52.8 per cent, and continues a steady upward trend since 2013 of people choosing to get around the city without a car.

Automobile use dropped from 52.5 per cent of trips taken by residents in 2013 to 45.9 per cent last year, the survey said.

Transit ridership increased by one per cent since 2013 and walking by almost two per cent, although that mode dipped slightly in 2019. Cycling saw the biggest gains, doubling the number of bike trips taken by residents from 4.4 per cent in 2013 to 8.8 per cent last year.

“Cycling is a big story here,” said Storer, who attributed the increase largely to the city’s build-up of cycling infrastructure, which includes separated and painted bike lanes, as well as a bike share program.

The surveys, conducted since 2013, typically involve a couple thousand people.

Participants are encouraged to be part of the survey each year so travel behaviour can be tracked from year to year. In the 2018 survey, participants lived in nine “transportation zones” across the city and recorded a personal trip diary on a weekday.

More than 2,000 participants had access to a private vehicle.

Meanwhile, a recent move by city council requested staff reallocate 11 per cent of the city’s streets to become more people-focused, including increasing opportunities for more changes to accommodate cyclists and pedestrians.

That 11 per cent of road space is equivalent to the size of 30 B.C. Place Stadiums.

The pandemic and the need for physical distancing between people also saw the park board recently designate a lane in Stanley Park for cyclists.