Plan could make driving, parking more expensive, and includes a proposal for mobility or 'transport' pricing for drivers in the city's downtown core
Oct 28, 2020 10:26 AM By: Mike Howell 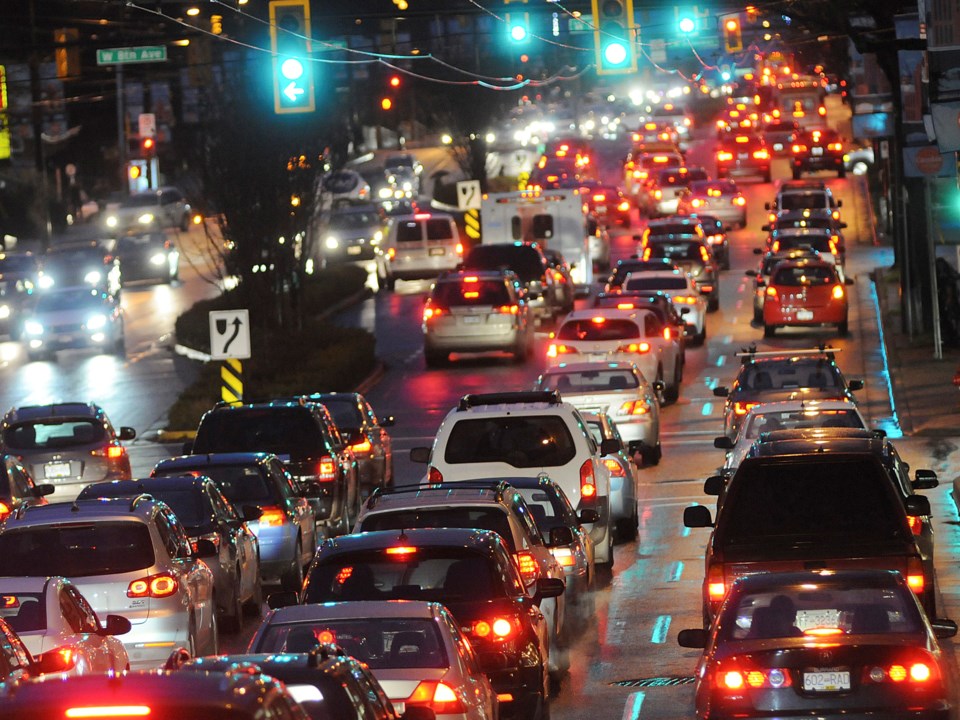 Road pricing and charging new vehicle owners a fee based on carbon intensity of vehicle are among measures proposed in Vancouver’s climate emergency plan. File photo Dan Toulgoet
The city’s proposed “climate emergency action plan” that goes before city council next week for adoption is estimated to cost $500 million, if implemented over the next five years.

Funds would come from existing and future capital plans, new fees and charges from climate emergency measures such as pricing drivers for trips downtown and contributions from senior levels of government and other partners.

The recommended shifts outlined in the 371-page report to reduce carbon pollution in Vancouver rely heavily on buy-in from businesses and residents at a considerable cost.

“The resident and business investments in solutions, such as electric vehicles and heat pumps, that occur between 2021 and 2030 in response to the climate emergency action plan and [the provincial government’s climate plan] CleanBC are estimated at $1.27 billion,” the report said.

“Those investments, in turn, generate savings estimated at $2.25 billion over the life of the investments, for a net resident and business savings of $980 million.”

The plan emphasizes numerous non-financial benefits in addition to the $980 million in savings, including “continuing to grow Vancouver’s green economy as workers and businesses develop their skills and supply chains for zero emissions mobility and buildings.”

In addition, the report said, a move to a less polluted city would improve residents’ health through reduced pollution and noise, encourage more active lifestyles and reduce “climate adaptation costs the city faces from climate change impacts, such as storm flooding, extreme heat, and wildfire smoke.”

Measures expected to get pushback from residents are those aimed at making driving and parking more expensive while building up infrastructure to promote more trips by walking, cycling and riding transit.

Staff proposes a transport pricing strategy for drivers using the metro core by 2025, if not sooner, and to implement a city-wide residential parking permit fee system in combination with drivers of new vehicles charged on the carbon intensity of their vehicle.

“The initial step will only apply to new vehicles with a higher purchase. price,” said the report, anticipating the threshold to be $40,000 to $50,000. “This approach will focus the policy on households that are purchasing new higher-end vehicles, where there is already a wider range of electric vehicles available on the market.”

The surcharge would not apply to households with older vehicles or households looking to purchase a lower-cost vehicle, where electric vehicles are still limited in availability.

“For residents who already own a gas or diesel vehicle, the more they can leave it at home, the better, but there is no expectation that they replace it sooner than needed,” the report said. “When that time does come, we want them to seriously consider electric options, depending on their needs and budget.”

Transport pricing would see a portion of vehicle trips in the metro core area taxed with a fee “to account for and improve carbon emissions, air quality, noise, safety, congestion and the use of public space,” the report said.

Staff’s argument for pricing vehicle trips is that it can encourage people to choose a sustainable mode of transportation or shift departure times, routes or destinations.

That, in turn, frees up road space for other transportation and public uses, while enabling more reliable travel times and managing congestion for those without immediately available alternatives to driving.

While transport pricing is itself “a game-changing action,” the report added, it does not stand on its own and, to be successful, relies on other sustainable mobility solutions to be accessible before it comes into effect.

“For example, priority bus routes will ensure that connections to the metro core are further strengthened in the first iteration, and these will be complemented by the addition of the Broadway Subway, where half its ridership is expected to replace vehicle trips originating outside the city,” the report said.

The recommendations to curb vehicle use is part of a wider plan to cut carbon pollution in Vancouver, including efforts to limit pollution from existing commercial buildings and detached homes, beginning in 2025.

Staff also wants energy and emissions reporting by large commercial and multi-family building and detached homeowners by 2023, and look at owners getting access to “favourable financing and third-party investment in deep emissions retrofits by enabling long-term and secure repayment of this investment as part of property tax collection.”

Coun. Christine Boyle has promoted the plan in social media posts and in a video which features celebrated environmentalist, David Suzuki, who said it “tackles our largest emission source head-on by accelerating the transition away from natural gas heating.”

“Serious climate action means transforming how we heat our buildings,” Suzuki said. “Second, it advances transportation and road pricing, so we stop giving cars a free ride. And it invests in making buses faster and more reliable, and making walking and rolling safer and easier.”

Boyle issued a news release Wednesday, saying "residents across the city will be watching, young people especially will be watching. Last year we committed to act on the climate emergency. This report gives Vancouver's mayor and council a clear opportunity to put their words into action."