On the "Day of Action Against Racism" in Vancouver, vandals have defaced the Chinatown Lions for a second time.
May 29, 2020 6:46 PM By: Elana Shepert 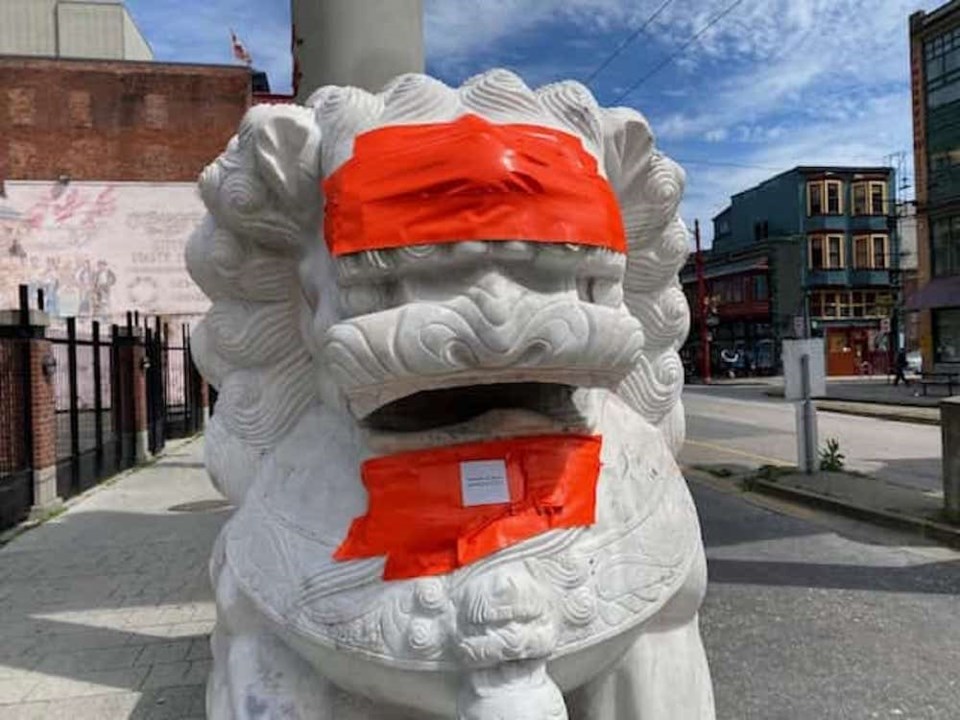 The City states that Vancouver Police are investigating the incident. Photo: City of Vancouver / Twitter

The City of Vancouver says that vandals have defaced both lions at the foot of the Millennium Gate in Vancouver's Chinatown with racist graffiti for a second time this week.

On Friday afternoon, the City Tweeted about the incident and stated that it is working with the Chinatown community to identify steps it can take to address the issue.

"We are extremely disheartened to share the news that yet again the Chinatown Lions have been defaced with racist graffiti," writes the City in a post.

"Goodbye Graffiti have begun work to remove the graffiti and we are exploring ways of coating the lions to prevent this happening again."

Vancouver Police are investigating the incident.

On May 19, vandals defaced both lions at the foot of the Millennium Gate in Vancouver's Chinatown with racist graffiti.

Mayor Kennedy Stewart announced yesterday that May 19 would be a Day of Action Against Racism.

Stewart issued a multi-lingual proclamation declaring that Friday, May 29 will be a Day of Action Against Racism and that, "as a City of Reconciliation, Vancouver is committed to addressing racism and hate."

Since the COVID-19 pandemic was declared, there has been a significant increase in the number of anti-Asian racist and xenophobic incidents. Last week, Vancouver Police Department (VPD) announced that 77 hate crimes and incidents have been reported to them in 2020, compared to 51 in the same period last year.

"Everyone has a right to live without fear of violence or discrimination. Yet we are hearing disturbing stories of a rise in anti-Asian racist behaviour since the beginning of the COVID-19 pandemic," says Horgan.

Anyone who experiences or witnesses racism or a hate crime can report it to the police, or to an organization such as the BC Human Rights Commission. VPD is working to reduce barriers that may prevent reporting, including developing a system that will allow victims to report non-emergency incidents in Cantonese and Mandarin.