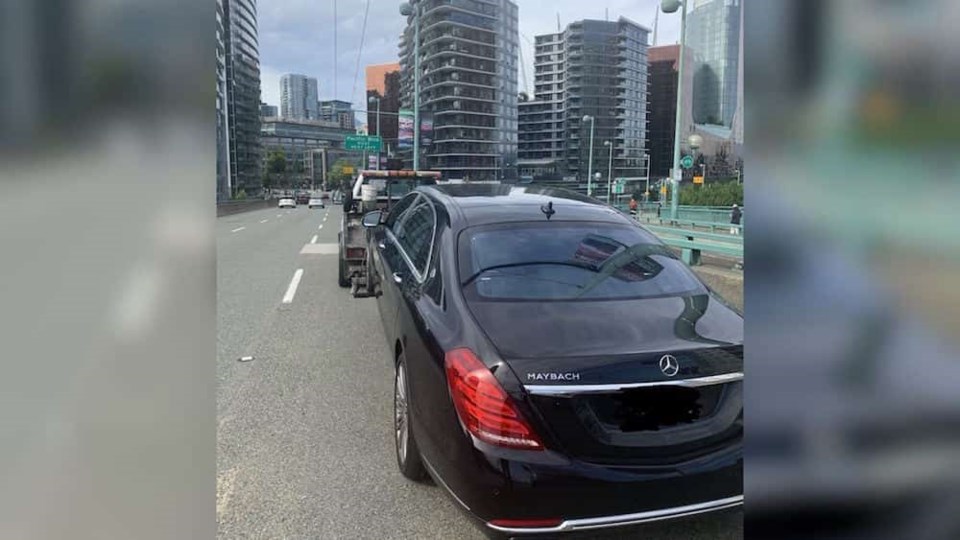 There may be fewer cars on the road due to the COVID-19 pandemic, but drivers should note that the VPD Traffic Unit is still active on Vancouver's Streets.

On May 29, Vancouver Police Sgt Mark Christensen tweeted an image of a Mercedes-Maybach being towed on the Cambie Street Bridge. He said the car was going 100 km/hr, which is double the 50 km/hr speed limit. And while he notes that this isn't an uncommon incident, he adds that the driver was a Learner with a supervisor. What's more, the car did not have the required "L" on the back.

The Motor Vehicle Act defines excessive speeding as going over 40 km/hr above the speed limit. Doing so comes with a hefty $368 fine in addition to a seven-day vehicle impound. In addition, the driver was slapped with a $109 fine for the missing "L".

In May, VPD Traffic Enforcement warned leadfoots that they were doubling down on efforts this week to target excessive speeders and other forms of dangerous behaviour as part of Canada Road Safety Week.

As people start to return to the roads, police say that they are dedicated to increasing road safety with targeted enforcement of unsafe behaviour. They also note that less traffic on the roads due to COVID-19 is not an excuse for speeding, racing or stunt driving.

On Thursday, May 7, Christensen posted a photo of three vehicles being towed for excessive speeding. He reports that three tow trucks were used to take away the vehicles that were excessively speeding in a residential area. One was clocked speeding at 98 km/hr, a second at 100 km/hr, and a third at 107 km/hr.

Christensen previously shared an image to his Twitter account of a Porsche being towed on the Granville Street Bridge. The driver was doing 93 km/hr in a 30 km/hr zone, which would also be considered excessive speeding.

In May 2019, the Government of British Columbia announced that it was cracking down on dangerous driving with a new automatic ticketing system in the summer. However, the system was slowly rolled out over time, with the first five activated in July 2019.

Since B.C. activated its first five automated speed enforcement cameras at the end of July 2019, the government notes that the program has issued more than 20,000 speeding tickets. According to a release, "The fastest ticketed vehicle clocked 174 km/h at a location where the posted speed limit is 80 km/h."

Now, Mike Farnworth, Minister of Public Safety and Solicitor General, has confirmed that automated speed enforcement equipment is now in place at all 35 planned Intersection Safety Camera (ISC) program sites and operating at 34 of them, on a 24/7 basis. Have a look at an interactive map of where they are located.