Want To 'Do' Something Interesting, Vancouver?

In May this year, the Economist called Vancouver a “mind-numbingly boring” city and later, a freelance writer at HuffPost BC agreed (http://huff.to/1Irf0JT). Interesting Vancouver is changing all of that with DoShops.

What the heck are DoShops anyway?

DoShops are a gathering of the curious where people get to explore, discover, and learn hands-on demonstrations from past and current IV speakers about their interesting passions. The inaugural DoShop opened on July 25th to explore the wonders of piñata-making with Meaghan Kennedy (@yourpinata) at MakerLabs. 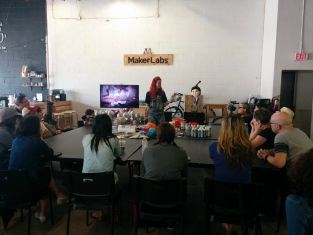 It was a sight to see: 15 adults and 1 child sat around the table, listening to Meaghan as she explained her process in making piñatas. She even provided everyone with instructions on how they could make their own piñatas at home. Paints, glitter, and fun fur piled in the center of the large table, the weight of it caving the table inwards. Though Meaghan was explaining the process, I could see the attendees’ eyes straying to the pre-made piñata forms behind her (if they were to make them from scratch, the DoShop would have taken all day).

Eyes lit up as Meaghan announced what they would be making for the inaugural DoShop...unicorns. 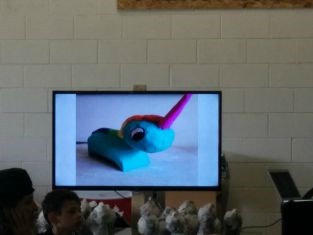 When told to choose their own piñata forms, chairs scraped against the concrete floor as everyone raced to grab the blank canvases. Meaghan took the attendees through the process of adding horns, hooves, and ears to their base piñata forms.

The additions dried in front of fans as everyone anticipated the best part: decorating your piñata.

A flurry of movements had people grabbing fun fur and glitter, squeezing paint onto paper plates and overturned coffee lids. Their brows furrowed with focused fervour, everyone painted their forms every colour of the rainbow ranging from My Little Pony to even a Ziggy Stardust unicorn. Everyone came away from the DoShop with a piñata that revealed something about their personality. 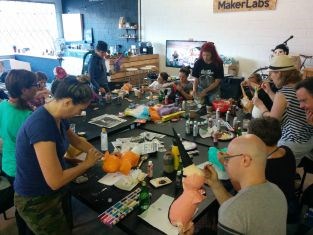 The table, once clean, was now a sea of glitter, flour and water paste, and paint. The queue for the glue gun grew as everyone wanted to add more accessories to their piñata. Laughter and raucous talk roared over the music.

At the start of the DoShop, people walked in with their morning coffees, quiet and reserved but open to an experience. By the end of the DoShop, contact information was exchanged and everyone left with a fun piece of happiness they could smash.

Even Meaghan commented on the experience, saying that “...everyone made such unique unicorns even though they all started from the same shape! People became more engaged as they went on...Perhaps unicorns are truly magical.” 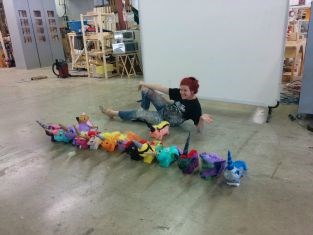 A general feeling of creativity started off the day and by the end of it, I’m sure everyone was happy they were able to ‘do’ something interesting that Saturday.

I guess Vancouver isn’t so ‘boring’ after all. 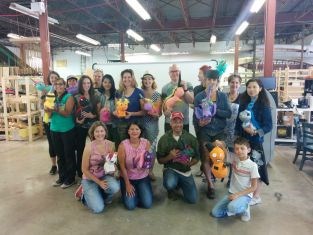 Some comments from the inaugural DoShop attendees:

“What a fun thing to do!  Meghan was great...enthusiastic, fun and encouraging.  the lunch was really good including a yummy beer! Looking forward to your coming events!”

“I had a great time at the piñata-making workshop. Meaghan was a superfun workshop facilitator, the space was perfect. it was a deal considering the load of fun, food and beverages we got for $30 (plus a kick ass piñata!). Overall 10 out of 10.”