A Ladner wheelchair user says he’s fed up and wants to raise awareness about the lack of bus stops in the community where transit is willing to pick up disabled passengers.
0
Oct 12, 2019 4:08 PM By: Sandor Gyarmati

He’s getting tired of spending a fortune on cabs to get around because a bus won’t pick him up.

Longtime Ladner resident Ritchie Brennick, who began using a wheelchair two year ago, says he’s fed up and wants to raise awareness about the lack of bus stops in the community where transit is willing to pick up disabled passengers. 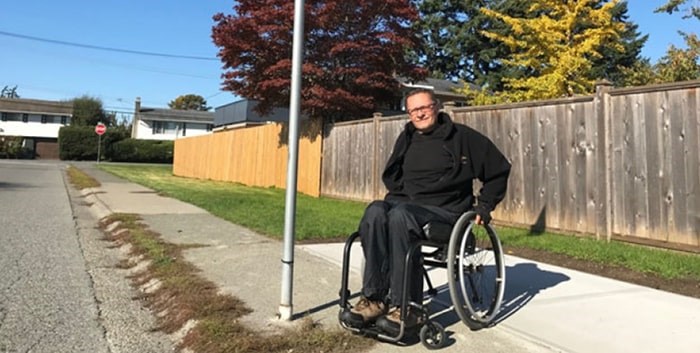 Ritchie Brennick wants to raise awareness about the lack of bus stops in Ladner where transit is willing to pick up the disabled. Photograph By Sandor Gyarmati

Waiting at a bus stop on 46A Street near his Port Guichon home leaves him frustrated when a shuttle will slow down but drive by, leaving him to wheel himself through the streets to a local store or take a cab to get out of town for an appointment.

“Right around the corner, there’s three bus stops and I don’t get picked up at any of them. From what I can gather, the nearest stop they’ll pick me up is two miles away. I went through a winter being stuck inside,” he said.

Saying HandyDART is problematic because the service is not always available around his schedule of appointments, Brennick said there shouldn’t be any problems for disabled people to take public transit.

He also said there shouldn’t be any problem lowering a lift at his neighbourhood stop because one community shuttle bus driver did just that when she saw him waiting.

“They’re equipped with ramps and have wheelchair accessibility. She explained why they normally wouldn’t stop for me and that’s because it wasn’t designated for handicapped people who can’t walk, but she was able to take me, though. I’ve been on a million buses in Vancouver and have no issues there, they pick me up everywhere.”

TransLink told the Optimist that every bus in its fleet is accessible and can carry two wheelchairs or mobility aids. Not all bus stops are accessible, however, so passengers may want to use the Trip Planner tool or call to find the nearest accessible bus stop to their starting point or destination.

As far as accessible bus stop upgrades near Brennick, TransLink notes that an eastbound stop and a westbound stop were recently completed on 45th Avenue in Ladner, and are waiting the proper signage to indicate they’re wheelchair accessible.

TransLink says it has developed, through consultations with stakeholders, its Access Transit Strategy to work towards a transit system that is as accessible as possible for everyone.

A TransLink spokesperson explained bus stops are owned and maintained by the municipalities in the region. The majority of bus stops in Metro Vancouver are wheelchair accessible.

Although TransLink is not responsible for municipal bus stops, the transit authority works with municipalities to make improvements.

TransLink has programs like the Transit Related Road Improvement Program and the Walking Infrastructure to Transit Fund, which looks at how to improve access to stops and convenience for customers, the spokesperson explained.

“As per TransLink's guidelines, an accessible transit stop requires a raised curb and a three-metre wide surface for buses to be able to pick up passengers using a wheelchair,” Lan stated. “The city has been active in providing these upgrades in conjunction with our Neighbourhood Roads Improvement Program. We also have responded based on resident requests to install accessible stops where required.”