At one point, the man said he couldn’t breathe after an officer appeared to be leaning on his neck or upper back. Witnesses are heard on the video telling police to get off his neck.
Aug 12, 2020 1:37 PM By: Mike Howell 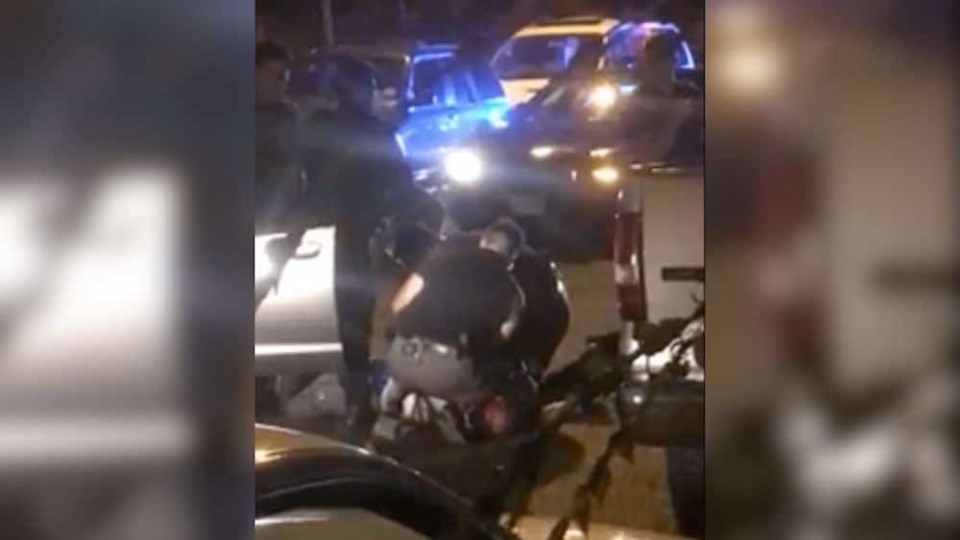 At one point, the man said he couldn’t breathe after an officer appeared to be leaning on his neck or upper back. Witnesses are heard on the video telling police to get off his neck. Photo: Screengrab from video courtesy of Andrew Louzi.

A witness to a police arrest in East Vancouver Tuesday night says officers knocked a cyclist to the ground in their unmarked police car before punching him and firing a Taser at him in an incident that left Andrew Louzi shocked at the level of force used.

Louzi shot video of some of the incident on his phone and said the cyclist was riding along East Sixth Avenue, near North Grandview Highway and Woodland Drive, when officers struck him from behind with their car.

“It’s just a completely unnecessary response to someone who I could almost guarantee was not posing a threat to anybody, and did not deserve that sort of treatment from police,” said Louzi, who along with his roommate obtained officers’ badge numbers and plans to file a complaint with the Vancouver Police Department and Office of the Police Complaint Commissioner.

Louzi was walking home with his roommate around midnight when he noticed the unmarked police car, with its headlights off, going north on Woodland Drive. Then he saw a cyclist ride past the car and continue along Woodland, turning onto East Sixth Avenue.

“That’s when the [officers] turned the lights on and started tailgating the cyclist, which we thought was kind of strange,” said Louzi, who works in the digital media department for Glacier Media.

Louzi said the police car kept speeding up and slowing down, making contact with the cyclist until hitting him with enough force to knock him off his bike. He came to a rest beside the police car, he said.

“Police immediately got out of the car and started throwing punches at the cyclist, who wasn’t resisting at all,” he said, noting the man then tried to stand up and was pushed inside the open driver’s side of the police car.

The video shows police punching the man and yelling at him to get out of the car. An officer arrives and fires a Taser at the man, who is eventually taken to the ground and handcuffed.

At one point, the man said he couldn’t breathe after an officer appeared to be leaning on his neck or upper back. Witnesses are heard on the video telling police to get off his neck.

“I thought you guys were going to kill me,” the cyclist said moments later as he lay with a bloody face in the street waiting for paramedics to arrive.

Sgt. Aaron Roed, a VPD media relations officer, said officers were attempting to stop the man for a bylaw infraction —riding a bike on a sidewalk with no helmet. Roed said officers identified themselves as police and told the man to stop.

He said the cyclist ignored their commands and tried to flee from police.

“The cyclist was stopped a short distance later, at which time he began to fight with officers,” Roed said in an email to Glacier Media. “During the arrest of the accused male, he punched the officer in the face multiple times and jumped into the driver’s seat of the police vehicle. The man tried to steal the police car and revved the engine in an attempt to get away. After a struggle, he was taken into custody.”

Upon learning of the police’s version of the incident, Louzi said there were some obvious gaps in what the department chose to release to media, including the man being struck with the police car and later trying to steal it.

“You can see in the video he’s completely in self-defence mode, being non-violent and gets pushed into the car — he’s not trying to get into the car,” he said.

Louzi reiterated the action police took to stop someone for riding a bike on a sidewalk without a helmet was a complete overreaction, and only escalated the incident.

Roed said the department continues to investigate the incident.