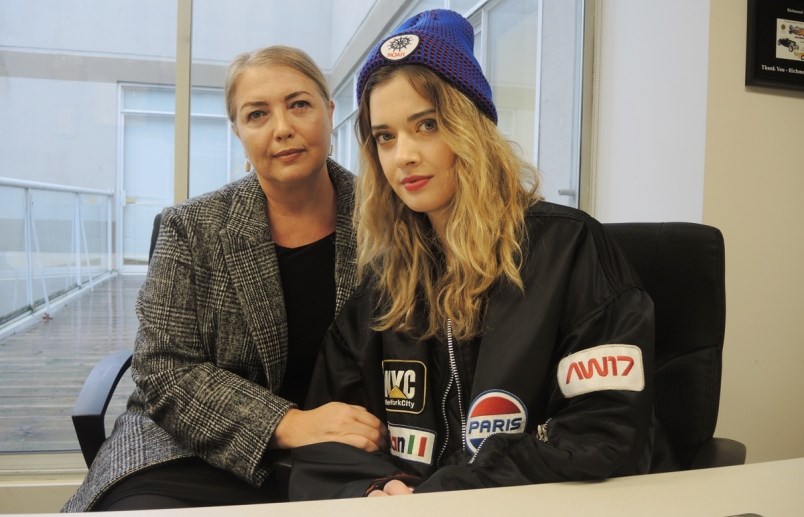 Kamilla Fa, with her mother, Mila Vagabova. Fa was subjected to 90 minutes of intense questioning, despite declaring the winnings from Vegas and the cash being wrapped in official casino tape. Photo by Alan Campbell/Richmond News

A Richmond resident is hitting out at the Canadian Border Services Agency for being “interrogated” after returning on a flight from Las Vegas.

Kamilla Fa says she was subjected to 90 minutes of humiliating questioning in a private room at YVR because she declared around $14,000 of winnings gifted to her from her Chinese national boyfriend, who she met up with in Las Vegas.

After arriving at the airport around midnight on Monday, Fa, 32, claims various female border guards refused to believe how she got the money, despite it being wrapped in casino tape and in a casino envelope.

And, according to Fa – a well-travelled, self-employed graphic designer - the guards refused to believe she even had a boyfriend, before confiscating her phone.

All the while, her mother, Mila Vagabova, was outside waiting to pick her up and had no idea what was going on inside.

“They continuously asked me where the money came from; they didn’t believe my response. They said I was lying to them,” Fa, a Canadian citizen, told the Richmond News.

“They were trying to catch me lying and told me many times to my face that I was liar. They demanded I tell them the truth. I filled out a declaration form truthfully. I wasn’t hiding anything.

“They actually refused to believe my boyfriend existed and they wanted proof. They wanted his full name, they wanted to find him in their system, they wanted to know if he came to Canada before. He’s not Canadian and he doesn’t live in Canada.”

Fa, who “felt scared” during the grilling, said the guards continued to pressure her and demanded to know where her boyfriend of three months got his money to gamble with.

The guards also struggled, added Fa, to accept she had previously met her boyfriend in China, while travelling and studying Chinese.

“I tried to give them as much as I could, but they still weren’t satisfied and they then confiscated my phone and asked me to unlock it.

“They took it away and spent quite a bit of time looking through my phone, looking at pictures and contacts. But there’s no photos of (Fa and her boyfriend) and it’s a new phone; there’s not much on there.

“They again told me I was lying and that I don’t have a boyfriend. I was feeling scared. They went through everything, including my underwear. They said they were looking for evidence of criminal activity.”

At around 1:30 a.m., the border guards gave Fa her phone back, apparently along with a departing sarcastic remark.

“They still said I was lying. As I left, one of them said, ‘hopefully this boyfriend sticks around,’” said Fa, who filed a complaint with the CBSA on Tuesday.

“My work is not 9 to 5. I don’t have an office job. I have a different lifestyle and I don’t always live in Vancouver with steady employment.

“I have clients that are not in Canada. I think it was a problem because I’ve been to China many times over the years. They even asked me why I had Chinese friends. I told them I like the culture.

“It was shocking to me to get asked so many personal questions. I know it’s difficult for some border guards to understand what I do. It’s not normal. But it’s not illegal.”

Vagabova was upset not knowing what happened to her daughter and even angrier after hearing how she was treated.

“She would have had an easier time if she told a false story. She told the truth and they didn’t like it,” said Vagabova.

“I think she has been judged by people with very limited life experience and some very narrow-minded people who have their own ideas about how people should be living their lives.

“There are billions of dollars getting funneled through money-laundering in B.C. and they come after my daughter with $14,000 of winnings from Vegas?

“She has money and can travel, that is not a crime. She is a Canadian citizen and shouldn’t be treated like this.”

Despite the experience, Fa said she will not be deterred from the traveling she has to do.

“I have business interests in China and will be going back there. I’m not going to change my plans, as I’m not doing anything illegal. This is my life choice,” she said.

The News contacted CBSA on Thursday afternoon for comment. About two hours later, Fa received a call from a CBSA supervisor at YVR, apparently apologizing for her treatment.

According to Fa, the supervisor said the guards should have simply accepted the declaration form and passed it onto FINTRAC.

She was told that the guards didn’t have the right to take her phone away and they shouldn’t have kept her in for questioning for so long.

“They have abused their power,” said Vagabova. “They didn’t follow protocol.”

The News has yet to receive comment from the CBSA, although it has acknowledged our request.