9 hour continual shot of salmon a first in the world

Vancouver's own Salt, Fresh & Field Media released an incredible video with TELUS Optik yesterday. The Salmon Return - A Day Underwater, shown in its entirety below, is a 9-hour-long continually shot video sequence of coho and chinook salmon spawning on the Quinsam River on Vancouver Island. No editing was done to it, and it is absolutely mesmerizing.

Shot from sunset to sundown, the video's producer Chad Brealey (who is coincidentally my very good friend/mentor who took me hunting and whom I wrote about earlier this week) shared some insight on the process today. They think that this is possibly the longest length anybody has ever shot a continual HD sequence underwater, and technically it's not as simple as putting a camera below the surface. They had to get super creative not just in the concept (which is in line with the whole "slow TV" movement you may have heard of) but in the execution. They factored in an external recorder running from what had to be waterproof, capturing all of the data. They also had to solve the problem of battery life, and they did it by running a generator for the duration, hard wiring a power source to the camera. Lighting was another challenge, and the day that they shot in November of last year was pretty much the only window during that time frame that it was bright enough to make something happen. Any number of things could have brought production to its knees, for instance a log coming down the river - as they tend to do - and taking out the camera. Luckily for us the stars aligned and we get to witness an uninterrupted day of salmon spawning in British Columbia. Cozy up to this Youtube clip, and if you've got TELUS Optik TV watch out for 2 and 4 hour versions of it on there.

Below is the Nikon D800 in aquatic housing that they used for the shoot. To get more of an inside look at the technical side of the shoot have a look at Director of Photography Eiko Jones' blog post on his site! 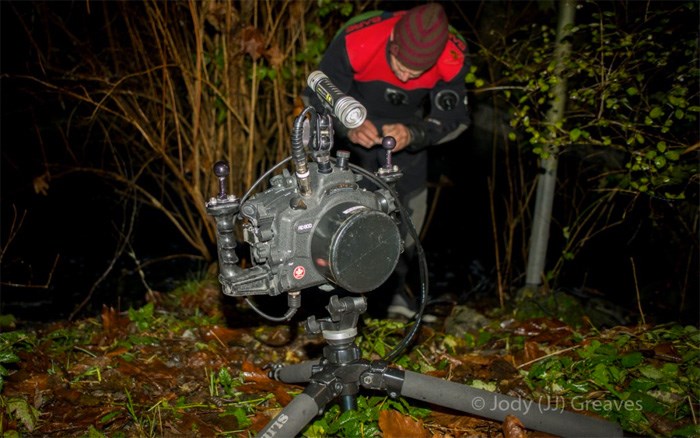