Cetaceans at The Vancouver Aquarium. Photo Dan Toulgoet VANCOUVER - British Columbia's Appeal Court has ruled in favour of a filmmaker whose documentary criticized the Vancouver Aquarium's practice of keeping beluga whales and dolphins in captivity.
The Canadian Press
Nov 15, 2017 5:36 PM 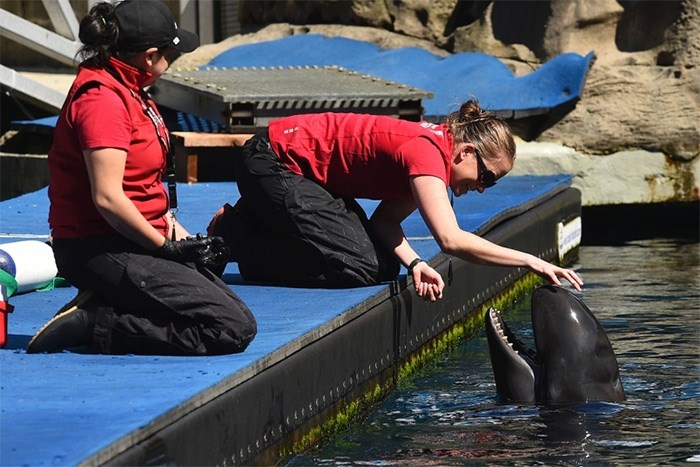 VANCOUVER - British Columbia's Appeal Court has ruled in favour of a filmmaker whose documentary criticized the Vancouver Aquarium's practice of keeping beluga whales and dolphins in captivity.

It said Wednesday that a lower court judge erred in ordering the filmmaker to remove 15 segments of his documentary that the aquarium claimed could cause the facility irreparable harm.

Justice Elizabeth Bennett said a B.C. Supreme Court judge accepted, "without any further analysis," an affidavit by the aquarium's chief financial officer and senior vice-president of business who said the derogatory use of copyrighted material could cause harm that would be impossible to calculate or repair.

"There was not a shred of evidence in support of that conclusion," Bennett said in a written ruling, adding the affidavit did not mention any damage pertaining to loss of donations, attendance or other factors.

The aquarium filed a lawsuit against filmmaker Gary Charbonneau in March 2016, alleging copyright infringement and breach of contract. A month later, it was granted an injunction to remove disputed content from the one-hour documentary called "Vancouver Aquarium Uncovered," which YouTube refused to remove at the request of the facility.

Bennett said aspects of the documentary that are highly critical come from clips of public hearings where aquarium officials have spoken and of their public positions and budgets, juxtaposed with interviews of experts and former and current park board members, "all critical of the aquarium."

"The film is about a public dialogue and debate on the issue of whether cetaceans should be kept in captivity," said Bennett, who wrote the first part of the decision on behalf of a three-judge panel.

Justice Mary E. Saunders said the aquarium failed to establish why the film would cause irreparable harm as she highlighted freedom of expression.

"That freedom of expression affects not just the parties to this litigation but also the larger community whose interests are engaged by the application," she wrote.

Charbonneau called the lawsuit a bullying tactic, saying he aimed to expose the truth about the facility's captivity practices.

Charbonneau said he would insert about five minutes of material that he had to edit out of the online film.

The aquarium said it is disappointed in the ruling and has not yet decided whether it will move forward with its copyright lawsuit filed in 2016.

The facility provides a safe haven for marine mammals, including rescued whales and dolphins, it said in the statement.

However, Charbonneau said in 50 years, the aquarium has only rescued one false killer whale and three porpoises, two of which died there, while one was released.

An aquarium spokeswoman said no one from the facility was available for an interview about its programs, but that a Pacific white-sided dolphin has been rescued.

The aquarium argued Charbonneau used copyrighted material from its website and blog without permission, but the written decision did not mention its use as such, focusing instead on the charter right to freedom of expression.

Animal Justice, along with the B.C. Civil Liberties Association, were interveners in the case.

Monique Pongracic-Speier, a lawyer representing the civil liberties association, said the decision recognized freedom of expression requires the most stringent protection when a court is considering whether to grant an injunction pending a trial.

The Vancouver Park Board voted in May to stop new whales, dolphins and porpoises being brought to city parks. The aquarium's false killer whale, a harbour porpoise and a Pacific white-sided dolphin will be allowed to stay at the facility in Stanley Park, but they can't be used in shows.