Have you ever spent weeks seeking permission from the government to travel across the globe during a pandemic to be with your significant other?
Jul 3, 2020 2:36 PM By: Lindsay William-Ross 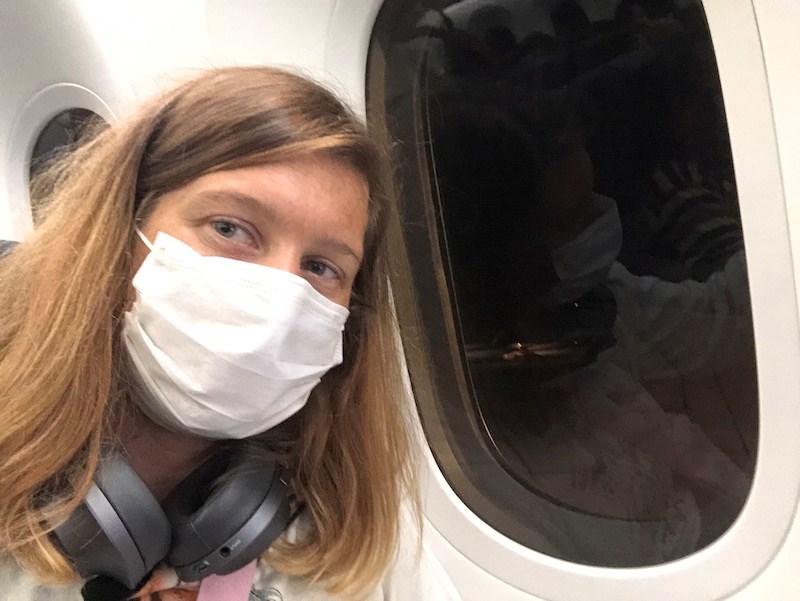 Cassie De Colling on one of the three flights she took to travel from Melbourne, Australia to Vancouver, Canada at the end of April 2020. Photo courtesy Cassie De Colling

Have you ever spent weeks seeking permission from the government to leave your country to travel across the globe during a pandemic to be reunited with your significant other? Australian filmmaker Cassie De Colling never thought she'd do anything for love, but she did do that.

De Colling, 34, who has spent the last few years working in a variety of international locations, had been in lockdown in Melbourne, Australia this spring when she launched the lengthy and complicated journey to fly to Vancouver during the COVID-19 crisis in order to be with her boyfriend, Canadian Chris Harris.

As a means of communicating with her mother back in Australia and Harris in Vancouver, De Cooling did what comes naturally to her - she documented the process of flying to Vancouver via video snippets she sent to them, as well as posted to her social media accounts.

Then, however, she realized she could turn her experience into a short 10-minute film. De Cooling tells V.I.A. that she was struck with the idea to share her story more broadly as she embarked on the first airport leg of the multi-day trip.

"When I arrived at the airport in Melbourne I was blown away as to how dead it was - that's when I thought holy shit this moment in time is never going to happen again," says De Colling.

Of course, getting to the airport, ticket in hand, wasn't an easy feat.

De Colling says the process actually began quite some time before her first flight took off, as Australians were not permitted to leave the country, period.

"I needed to apply for an exemption to travel which I did so on the grounds of compassionate cause," explains De Colling, adding that she went to some atypical lengths to plead her case: "To prove my relationship I made a private Facebook page and had my friends comment on how they know Chris and I. I printed this wall of testimonials and sent it to the Australian Border Force."

It took three weeks for De Colling to receive permission to travel. She found a set of flights that would take her from Melbourne to Sydney to Tokyo to Vancouver. But even with the tickets and the Working Holiday Visa, it wasn't a guarantee she'd be let into Canada, and it wasn't looking like smooth sailing ahead.

"One of the things I wasn't able to do was get any form of travel insurance," says De Colling. "I called about 10 places and no one could grant me anything."

Despite the first leg of her 45-hour route going well, things got a little dicey in Sydney.

"At Sydney airport, the airline hostess ripped up my boarding pass as they didn't think I would be able to get into Canada on a Working Holiday Visa. It took a lot of time and convincing them to let me fly," says De Colling. But that wasn't all.

"Then when I went to clear customs in Australia they had a glitch with something on my paperwork and I had to fill in a bunch of forms twice so that was really stressful." 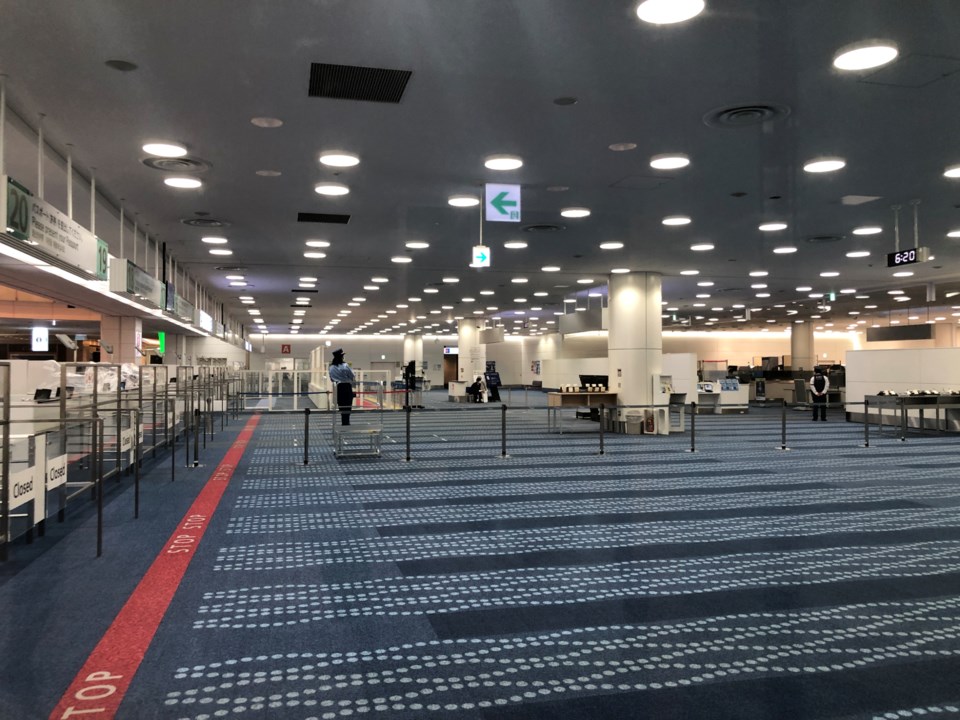 But she continued to make it, portion by portion, documenting each step, like the shockingly empty airport terminals and boards showing heaps of cancelled flights, along the way.

Once she landed at YVR in Vancouver, De Colling says the border officials "were surprisingly welcoming."

She was required to fill in her 14-day self-isolation plan along with contact information for the period, and then was free to go.

And of course, Harris was there to welcome her.

While the video De Colling made ends with her safe arrival in Vancouver, as it turns out, the filmmaker is opting to keep the city as her home base for now.

De Colling says she adhered to the 14-day self-isolation requirement, but at no time was she contacted by anyone for a follow-up or check-in.

"The first time I went outside [in Vancouver] was so bizarre, seeing people in the parks blew my mind. It was very different to Australia where the only allowed social activity was going for a walk with one other person," says De Colling.

Her first outing in Vancouver? She and Harris took a skateboard ride along False Creek to Kitsilano.

Things still feel not quite the same for De Colling when it comes to living in Vancouver during COVID-19 and how it had been up until late April when she was in Australia. 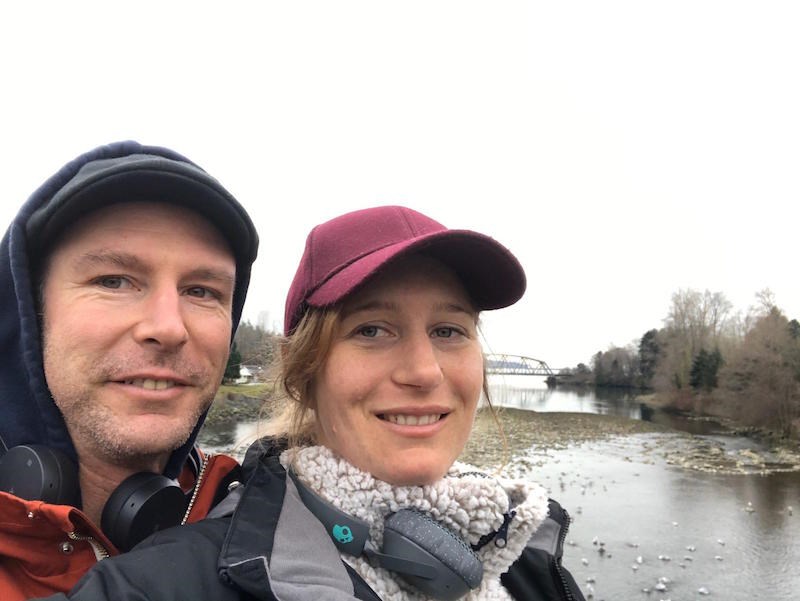 "Australia is being much more strict and careful. They have a fraction of the numbers than Canada. In Australia, there were advertising campaigns across print, radio, and TV  to call-out people disobeying the restriction rules. Recently Melbourne had an outbreak of 37 new cases and as a reaction, the local government is enforcing isolation of post/zip code with anyone who breaks this is up for $5000 fine," explains De Cooling.

"Here in Vancouver, it feels very different. People are allowed to gather, people are going camping, bars are starting to open. It was and still is quite a shock for me to see a large group of people together," adds the ex-pat.

Though the trip itself was a physical ordeal, for De Colling the concerns about the trip were more personal.

"The biggest battle for me wasn't the flying it was deciding whether to go or not. My network is in Australia and I felt like if I had stayed it would be easier for me to get up and working again, whereas here I am only starting to get to know people in my industry."

But love is, after all, universal. And there are a lot of people living far from their partners who have wondered how they would keep making it work. De Colling is hoping her experience of crossing the oceans amidst all the red tape and COVID-19 will strike a chord.

"I feel like this is something long-distance couples can relate to so I wanted to capture that story."