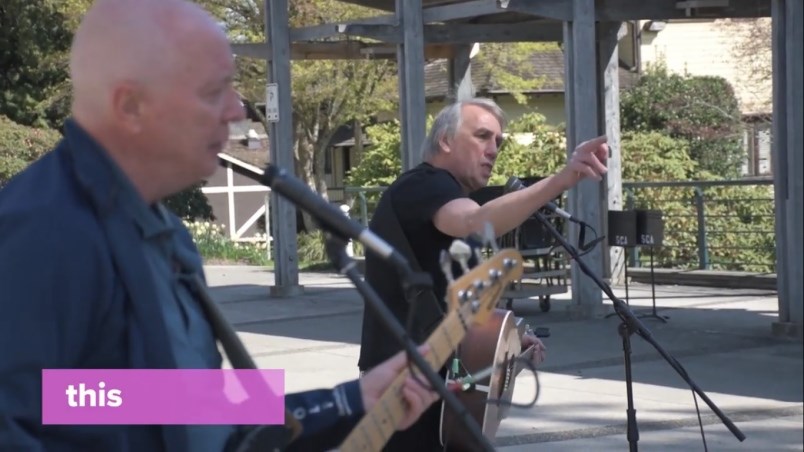 Mayor Mike Hurley (left) and Joe Keithley perform their song, We're All in This Together, at Deer Lake Park. The song is intended to be an anthem for the community during the COVID-19 pandemic. PHOTO BY CITY OF BURNABY/YOUTUBE

A song performed by a pair of Burnaby politicians, billed as a community anthem during the COVID-19 pandemic, is now digitally available for sale, with proceeds going to the food bank.

Burnaby Mayor Mike Hurley and Coun. Joe Keithley – a.k.a. D.O.A. frontman Joey Shithead – teamed up recently to compose their new song, We’re All in This Together. Last week, the city released a video of the two playing the song in Deer Lake Park with a safe two metres between them.

Now, the song is available for download on iTunes, with all proceeds going toward the Greater Vancouver Food Bank. The move comes after the duo’s performance saw a strong performance on social media – the video has been seen more than 33,000 times in five days, according to the city.

“It’s great to see that this song resonates with people,” said Hurley in a news release. “This is a time when we find out what we’re made of, and I think people share the feeling that we need to come together and support each other.”

The city described the song as a “salute to the resilience and perseverance of residents during the COVID-19 crisis and a rallying call.” It was largely written by Keithley, who performed lead vocals and guitar, while Hurley played the bass and sang backup vocals.

"In this time of crisis it's really crucial that we support our neighbours, and the Greater Vancouver Food Bank does such a great job at supporting those in need,” said Keithley. “So I'm really happy that the proceeds from the We're All in This Together single goes to support the food bank.”