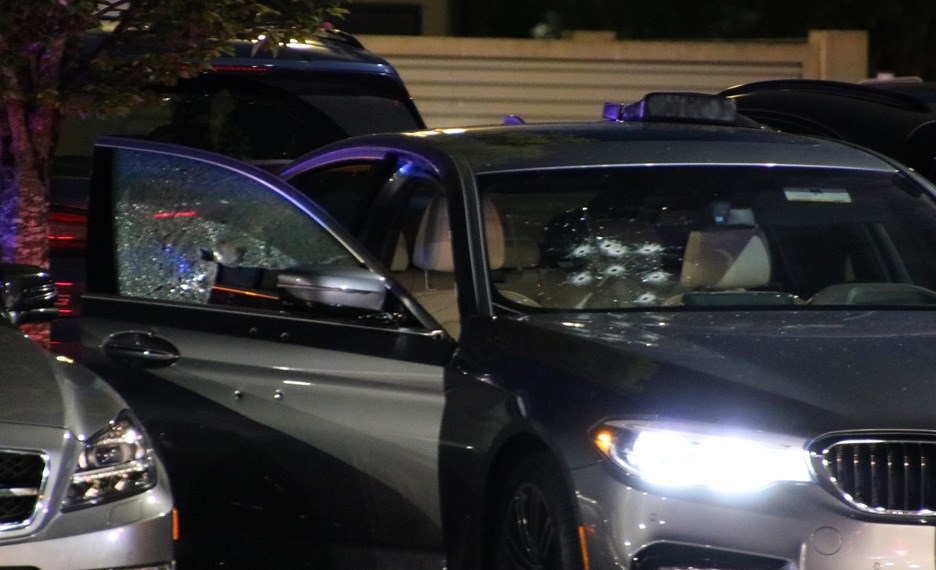 A silver BMW was sprayed with gunfire Thursday night at Market Crossing mall in Burnaby.Ryan Stelting

Burnaby’s top cop says the local RCMP is “immediately supplementing” its gang team with extra resources for the weekend after two deadly gangland shootings in the city in less than a week.

“Disregard for human life is not to be tolerated. This is our number 1 priority,” Supt. Graham De la Gorgendiere said at a press conference at Burnaby RCMP headquarters Friday.

The Integrated Homicide Investigation Team was at the detachment to share details about the latest shooting in Burnaby.

On Thursday, just after 8:30 p.m., shots rang out near the Market Crossing Cactus Club on Byrne Road, killing 23-year-old Jaskeert Kalkat and seriously injuring two others, a man and woman, both in their 20s, according to IHIT spokesperson Sgt. Frank Jang.

All three victims were known to police, and investigators believe all three were targeted in the hit, according to Jang.

He said a white SUV found burning in South Surrey about 25 minutes later is believed to have been the shooter’s getaway vehicle.

Jang said the shortest route between Market Crossing and where the vehicle was found burning in the 2500 block of 18th Avenue in Surrey would include highways 91 and 99 and 16th Avenue.

The Market Crossing attack, which reportedly saw Cactus Club patrons dive for cover behind flipped tables, is the latest in a spate of brazen public shootings around the Lower Mainland linked to an ongoing gang conflict.

Toni Dalipi, 19, was shot to death outside a vape store on Sixth Street near 13th Avenue last Saturday.

He said other teams with an interest in gangs, such as the community response team and drug squad, will also be involved.

When asked what he was expecting over the weekend, De la Gorgendiere said "We prepare for the worst and we hope for the best...We do not want to see another violent incident.”

De la Gorgendiere said Burnaby RCMP, IHIT, the Combined Forces Special Enforcement Unit (the province’s anti-gang squad) and other police agencies are sharing an “immense amount of intelligence and information” about gangs and the gang conflict but admitted local police had had no information about the Market Crossing shooting.

“It was a reactive approach to the last shooting,” he said. “We weren’t there at the time, and we didn’t have any information to say that this was going to occur.”

De la Gorgendiere said the Lower Mainland has seen deadly gang conflicts before, including in the early 2000s, and they are not an “overnight fix.”

Besides redeploying officers to the gang team, he said Burnaby RCMP is also in close communication with the province’s anti-gang agency to work out Burnaby’s role in a regional strategy to combat gang activity and violence.

About 64% of the people involved in Burnaby RCMP gang investigations are from outside of Burnaby, according to De la Gorgendiere.

“I think what this tells us is that this gang conflict has no borders,” he said.

Anyone with dashcam video or information is asked to contact IHIT 1-877-551-IHIT(4448) or ihitinfo@rcmp-grc.gc.ca.