“What’s most important is that we produce a catalyst for a conversation about a place that has a precarious future,” he says.

Victoria-raised conservationist McAllister has spent the past three decades living in and dedicated to B.C.’s central coast, a lush expanse twice the size of Vancouver Island. It’s he who coined the now common Great Bear Rainforest name. He has also been a driving force behind much of the regulatory protection afforded one of the world’s largest remaining temperate rainforests. 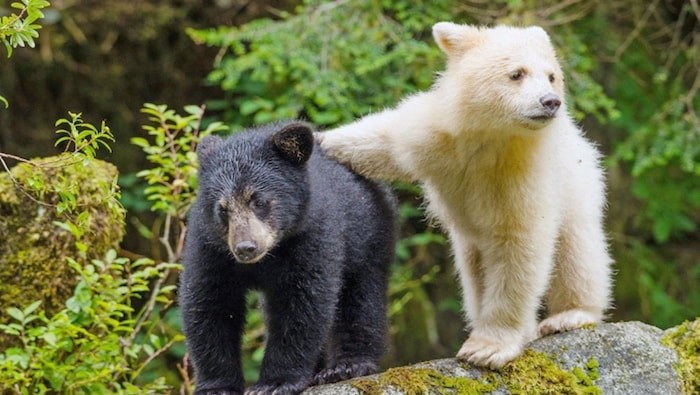 White bears are within the black bear species, but with a recessive gene that turns their fur all white. These two bear cubs are siblings in the Great Bear Rainforest. Photo by Ian McAllister

Wednesday, the 49-year-old travelled from his home on Denny Island, near Bella Bella, for the premiere of Great Bear Rainforest: Land of the Spirit Bear at Victoria’s Imax theatre. So did about 40 Indigenous people from Bella Bella, Hartley Bay and Klemtu — a sign of how vital the film’s message is to them. Others, too: Someone from Pacific Wild, the non-profit McAllister leads, called the central coast Canada’s Serengeti, a jewel of global importance.

An award-winning photographer and author of several books, McAllister long believed that only Imax’s rich sound and images could adequately portray the area. The reality, though, is that only recently did advances in digital photography result in cameras light and small enough to haul around the places he needed to go.

Also only recently did someone willing to bankroll the project emerge, thanks to a lunch McAllister had with Vancouver’s Kyle Washington, the executive chairman of Seaspan. “It became one of his more expensive lunches,” McAllister says.

The movie, narrated by actor Ryan Reynolds, took three years to film, but much of the focus was on three successive herring-spawning seasons, narrow windows of seven to 10 days in which bears, whales, wolves, seabirds and other creatures would descend on the same hunting grounds.

The resulting images don’t reflect how hard it was to shoot in herring season. The water is a murky mess of feathers, fish scales and, yes, whale poop. “You can’t see a thing under the water,” McAllister said. Anyone dreaming of doing his job should pause to think about working day after day while swimming in other species’ feces. Divers would go underwater four times a day in hope of being in the right place, in clear water, when surf scoters — a kind of sea duck — plunged down in search of herring roe.

Just filming a simple rainforest scene meant three days of waiting for the rain to let up.

“One little drop on the lens turns into something the size of a school bus on an Imax screen.”

He had a great support, though. Early on, legendary Imax director David Douglas would sit with McAllister in the Victoria theatre, going over test shots on the big screen and coaching him on large-format filmmaking.

North Saanich’s Tim Archer, the sound guy on 75 Imax films, brought 35 years of expertise. How to get close enough to record the noise of 10,000 seabirds without spooking them? Stick a $200 recorder on a styrofoam block on a little raft.

While using hydrophones to pick up the sounds of humpback whales bubble-net feeding — using their blowholes to create a circular curtain in which to trap herring — Archer discovered they made the same sequence of noises, “barking” and “trumpeting,” before surfacing. When they did that, he’d tell the camera operators to get ready. Worked every time.

Then there was the day the crew prepared to film Indigenous researchers pulling bear hair out of the bark of a tree against which grizzlies were known to rub. Being one of the few scripted scenes afforded the filmmakers the rare luxury of planning an elaborate shot, one that required the efforts of 14 people. Except instead of just filming people, they also recorded a grizzly that magically appeared from nowhere and began to rub itself against the tree — something rarely witnessed, let alone filmed.

Other surprises were dispiriting. Record rains triggered a mudslide that buried critical salmon-spawning grounds in five feet of mud.

“It tells you a lot about the fragility of the coast and the uncertainty of its future,” McAllister said.

Salmon runs have collapsed, herring populations have plunged and shellfish and groundfish abundance has fallen, yet industrial-scale fishing continues in areas crying for protection. The prospect of LNG tankers looms. Seventy per cent of the forest is meant to be subject to “ecosystem based management” but it just looks like old-fashioned clear-cutting to him.

This has to change, he says. People have to notice. Hence, the movie — three years of filming, 30 years of his life, squeezed into 42 minutes. Great Bear Rainforest oruns through the summer.

These Vancouver siblings made a video showing you how to beat boredom during the COVID-19 pandemic
Mar 27, 2020 12:42 PM