The eerie but heartwarming footage shows how Vancouverites are coming together while staying apart
Apr 18, 2020 1:57 PM By: Megan Lalonde 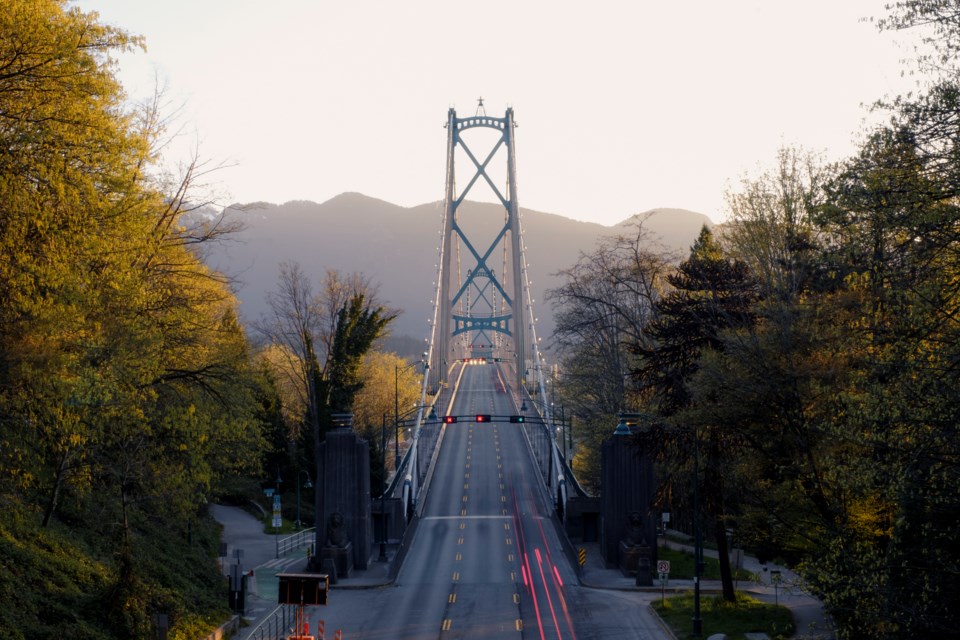 Lions Gate Bridge is quieter than usual during the COVID-19 pandemic. Photo by Spencer Watson.

It begins with a shot of an eerily-quiet Lions Gate Bridge.

Then it moves on to a deserted Olympic cauldron at Jack Poole Plaza, a single car crossing the Burrard Bridge, a lone runner making his way around coal harbour, swings roped off with caution tape at a playground.

The two-and-a-half minute video, created by Spencer Watson and titled ‘Come Together Stay Apart,’ shows downtown Vancouver’s typically bustling streets in a state that could, if not for the ongoing COVID-19 pandemic, only be described as post-apocalyptic.

But eventually, the solemn piano soundtrack crescendos into the sound of the nightly 7 p.m. cheer, and images change to inspiring murals painted on boarded-up windows, and West End neighbours banging pots and pans in their daily salute to frontline health care workers.

It offers a unique and moving view of the city of Vancouver, during these unprecedented times.

“I think the only real reason I stepped out to make this video was to simply document a very important time in Vancouver’s history,” wrote Watson, a creative director, in an email.

“Something of this magnitude has never happened before and the most interesting part of it all is that by doing their part, many people haven’t seen how much life in the city has slowed down."

Watson said he also made the short film for those who are staying indoors and socially isolating, “to show them that staying home does make a difference,” he explained. “That they also aren’t missing out on anything behind the walls of their home. And as a testament to the great job they’ve been doing while the frontline works to protect us and the beautiful city we call home.”